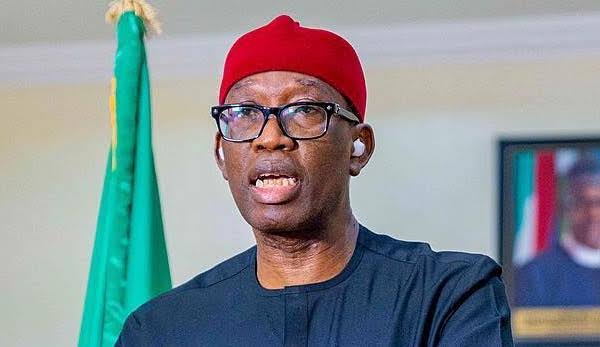 Delta State Governor Ifeanyi Okowa has complimented Mr. Ejiro Otarigho, the driver of the gasoline truck that exploded in Agbarho, Ughelli North Local Government Area, on Saturday, for his unusual heroism, which prevented a huge calamity.
Okowa stated in a statement issued by his Chief Press Secretary, Mr. Olisa Ifeajika, that the bravery and patriotism-driven risk made by the Agbarho-born driver prevented what could have resulted in massive loss of life and property.
He thanked Otarigho for exercising caution in directing the already blazing vehicle, filled with petroleum product, away from a densely populated area at the risk of his life, calling his bravery "incredible."
According to Okowa, this act of bravery and compassion in modern-day Nigeria is unequivocal.
"Yesterday, a tanker carrying diesel caught fire in the Agbarho hamlet; except for the extraordinary daring and heroism displayed by the driver, Mr Ejiro Otarigho, many houses and possibly lives would have been lost to the inferno."
"We were heartened to learn of the driver's bravery in driving the tanker away from a densely populated area and into a remote place before the tanker detonated."
"On behalf of my family, the Delta government, and the people of Delta, I applaud Mr Otarigho for what our God Almighty used him to achieve that day - preserving lives and property by courageous action."
"In a country besieged by difficulties of varied magnitudes, such acts of bravery are laudable and inspiring."
"We are proud of you, and we encourage other Deltans and Nigerians to follow your heroic efforts in all that they do," Okowa said.
Next Post Previous Post
No Comment
Add Comment
comment url
Breaking News,Okowa