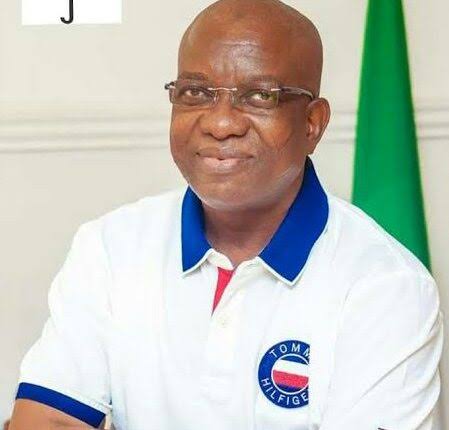 According to the News Agency of Nigeria (NAN), Olaniyan, an Oke-Ogun-born technocrat turned politician, announced his defection from the state's ruling Peoples Democratic Party (PDP) to the APC on Sunday.
Senator Teslim Folarin, the All Progressives Congress (APC) Governorship candidate in Oyo State, has welcomed the state Deputy Governor, Alhaji Rauf Olaniyan, into the party.
Olaniyan's defection was regarded as a welcome development and a significant catch for the APC in a statement personally signed by Folarin, who is also the Chairman of the Senate Committee on Local Content.
Olaniyan's defection, he added, was "a reflection of the haughty and unaccommodating mentality" of the state's PDP leaders.
"The state APC family is overjoyed that Alhaji AbdulRauf Olaniyan, the Deputy Governor of Oyo State, has joined us with hundreds of his followers across the 351 Wards."
"One of the few technocrat-turned-politicians I appreciate and respect is Olaniyan."
"In 2023, we will rescue Oyo State from the PDP with the help of Olaniyan and other well-meaning stakeholders in Oyo State politics."
"Oyo PDP is unhappy to have lost such a valuable asset." "There is no doubting that Olaniyan is a cool-headed man, extremely intelligent, and without a doubt the most experienced deputy governor in Nigerian history," Folarin added.
The APC flagbearer claimed that Olaniyan was never permitted to provide his great service delivery for the benefit of the state's oppressed populace.
"With characters like Olaniyan in the APC, the PDP will be humiliated in the 2023 general elections."
"The uncontrollable exodus that has devastated the PDP in Oyo State since 2019 is the biggest evidence for conducting an opinion survey," he remarked.
Folarin called Olaniyan's defection "a morale booster for the party ahead of the 2023 elections," promising him a resounding welcome following the APC presidential primary on Monday.
Olaniyan's status as the state's legitimately elected Deputy Governor, according to the legislator, is secure and constitutionally supported until his term expires on May 29, 2023.
Folarin asked the PDP to drop any plans for impeachment or further victimization of the deputy governor.
He stated that the APC will not tolerate harassment, humiliation, or victimization of any of its members.
"Olaniyan and his throngs of fans will not be the last to join the Oyo APC Rescue Mission 2023; many more PDP political office holders and chieftains will announce their transfers soon," he said.
Next Post Previous Post
No Comment
Add Comment
comment url
APC,Nigeria Elections 2023,Politics