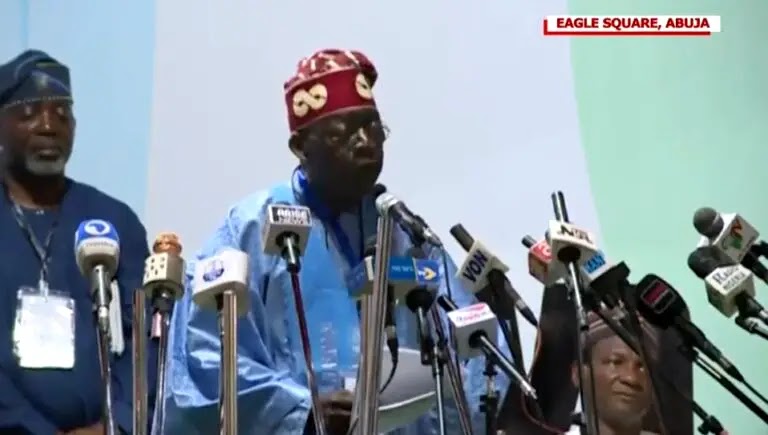 Sen. Bola Tinubu, a presidential candidate for the All Progressives Congress (APC), has stated that if elected in 2023, he will battle terrorism and insecurity in Nigeria.
He made the remarks while addressing the party's delegates at the party's extraordinary convention and presidential primary election at Abuja Eagle Square on Tuesday.
Tinubu praised the other 23 candidates in the race for running a good campaign, stating that the rivalry would make the APC stronger in the end.
He portrayed himself as a unifier, which is exactly what the country needs right now.
"Please nominate me as the party's presidential candidate for 2023 because I am capable and fearless of serving Nigeria and delivering good administration," he urged.
Tinubu, a former two-term governor of Lagos State, stated that if elected as the country's next president, he will have the expertise, track record of accomplishments, and ability to execute effective government.
Tinubu went on to say that true transformation and growth do not come from imitating others, but from discovering our own opportunities as a nation.
"I did this as governor of Lagos State for two terms." I respectfully request that you enable me to use my abilities and expertise to help the nation.
"I come to you with a clear vision for how to enhance our country's schools, industry, agriculture, and infrastructure so that it will be the pride of everyone."
"By issuing this speech, I solicit your assistance and support in becoming our party's nominee and standard-bearer in the upcoming presidential elections in February 2023."
According to the News Agency of Nigeria (NAN), contrary to popular belief, all 23 APC presidential contenders who purchased the party's Expression of Interest and Nomination forms were requested to sell their candidacy to the delegates.
Getting Info...