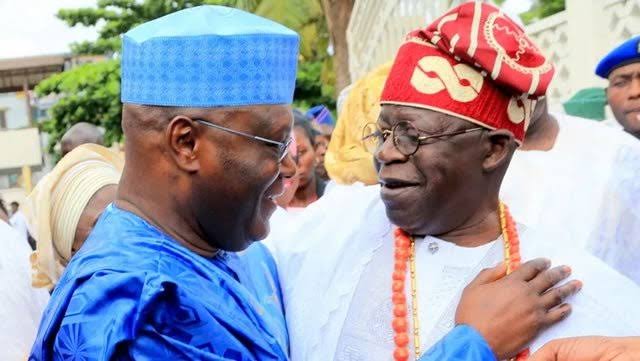 The presidential candidate of the Peoples Democratic Party (PDP), Atiku Abubakar, has congratulated former Lagos state governor Bola Ahmed Tinubu on becoming the flagbearer of the ruling All Progressives Congress (APC).
On Wednesday, June 8, 2022, Atiku sent the congratulations message via his official social media profile.
According to the former Vice President, Tinubu's election as the ruling party's presidential candidate demonstrated his determination.
"Congratulations, Bola Ahmed Tinubu, on your election as your party's presidential candidate," he tweets. It was a tough fight, but the fact that you won demonstrates your determination."

Congratulations, @officialABAT, on your emergence as your party's presidential candidate. It has been a hard-fought contest, but that you prevailed confirms your tenacity. -AA

Tinubu congratulated Atiku for becoming the opposition party's presidential flagbearer on May 29, 2022, stating he would be a worthy opponent.
"I applaud Alhaji Atiku Abubakar's win as the Peoples Democratic Party's candidate in the recently concluded primaries," he stated. In the upcoming election, I look forward to facing him as a worthy opponent. I know the former Vice President to be a formidable politician and patriot who believes in the unity and progress of our beloved country.
"As the election season progresses, I charge the PDP presidential candidate and all political actors across party lines to ensure this election season free of bitterness, rancor, and discord."
"We should run peaceful, issue-based campaigns." The election season should be a celebration of ideas that will help our country and the world.
"Unfortunately for the PDP, its candidate will be forced to explain why Nigerians should give it another chance after wasting 16 years in central government with little to show for it."
"Nigerians have yet to forgotten the PDP's 16-year national devastation and mismanagement of our country, and this terrible memory will haunt the PDP Candidate's campaign."
"However, I would want to congratulate our former Vice President on his victory in his party's primary," Tinubu remarked.
Tinubu won the ticket at the recently ended APC convention in Abuja, polling 1271 votes to defeat his main opponents, Vice President Yemi Osinbajo and former Rivers State Governor Rotimi Amaechi.
Next Post Previous Post
No Comment
Add Comment
comment url
Nigeria Elections 2023,Politics