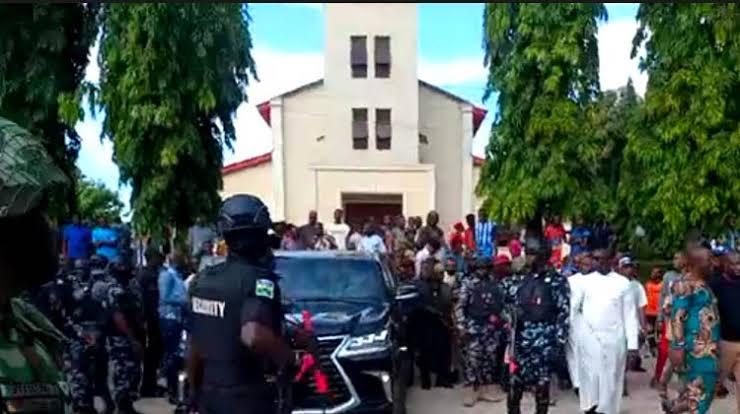 Many people were believed dead today when suspected terrorists opened fire on congregants at the St Francis Catholic Church on Owa-luwa Street in the Ondo State capital's Owo council area.
Funmi Odunlami, the state police spokeswoman, stated that the command would comment on the heinous crime later.
The leaders of national security services, according to reports, have raced to the old town.
Kehinde Ogunkorode, a member of the St Francis Catholic Church on Owa-luwa Street in Ondo State's Owo council area, reported that gunmen suspected of being kidnappers assaulted the church, killing at least 25 parishioners.
"It was like a movie," he said, "they attacked the church and shot indiscriminately." Several individuals, including children and women, were slaughtered.
"They tossed dynamite inside the church when they sought to abduct the priest."
Another source reported that no fewer than 25 bodies had been removed from the church, with numerous casualties being treated at the Federal Medical Center in Owo.
According to him, "several gunmen stormed the church during worship, opened fire, and killed no less than 25 church members."
"The killers took the congregation off guard. They also utilized explosives, although several were killed by gunfire.
The state police command had not yet responded to the killings in the old city.
Next Post Previous Post
No Comment
Add Comment
comment url
Crime