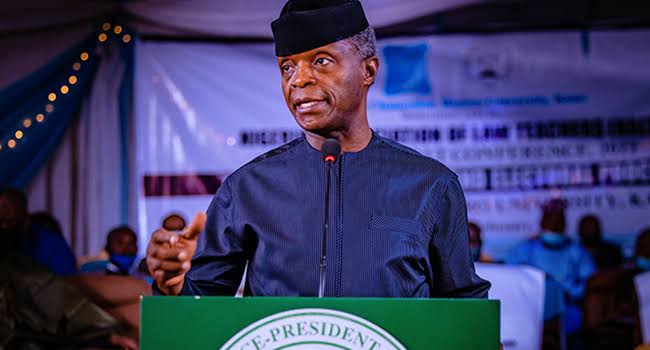 Yemi Osinbajo, formally known as Oluyemi Oluleke Osinbajo, is Nigeria's 14th Vice President. He is a pastor, Nigerian lawyer, Professor, and politician.
Yemi Osinbajo announced his desire to run for President of Nigeria in the 2023 Presidential Election in April 2022. He ran in the APC primaries alongside renowned politicians such as Bola Ahmed Tinubu, Pastor Tunde Bakere, and others. In the APC primaries, he finished third with 235 votes, losing to Tinubu.

Professor Yemi Osinbajo is President Muhammadu Buhari's Vice President, and he took office on May 29, 2015. He served as the Attorney General of Lagos State, Nigeria, from 1999 to 2007, in the cabinet of former Lagos State Governor Bola Ahmed Tinubu. He is a Pastor with The Redeemed Christian Church of Nigeria and the Senior Advocate of Nigeria.

Yemi Osinbajo was born on March 8, 1957, in Creek Hospital, Lagos, into the family of Opeoluwa Osinbajo.

From 1969 to 1975, he attended Corona Primary School in Lagos and Igbobi College in Yaba, Lagos. He studied law at the University of Lagos from 1975 and 1978 after finishing secondary school.
He completed the requisite one-year professional training at the Nigerian Law School and was admitted to practice before the Supreme Court of Nigeria as a Barrister and Solicitor. He went on to complete his master's degree at the London School of Economics.

Osinbajo is the Pastor in Charge of the Redeemed Christian Church of God's Lagos Province 48 (Olive Tree provincial headquarters). He is Nigeria's Vice President under President Muhammadu Buhari's administration. He served as an attorney general and a Commissioner of Justice in Lagos, Nigeria.

Yemi Osinbajo's sources of income include his work as a pastor, lawyer, lecturer, political appointments, and business ventures.

Yemi Osinbajo's net worth is estimated to be $3 million (N1.8 Billion) based on assets declared to the Code of Conduct Bureau from 2015 to 2022 and estimated cash deposited in Nigerian banks.

We have come to the end of Yemi Osinbajo Biography. As a result of this post, I hope you have a better understanding of your favorite political member. If you believe any of the information on this page is incorrect, please let us know by writing a comment below. Thank you for your time in reading this.
Next Post Previous Post
No Comment
Add Comment
comment url
Biography