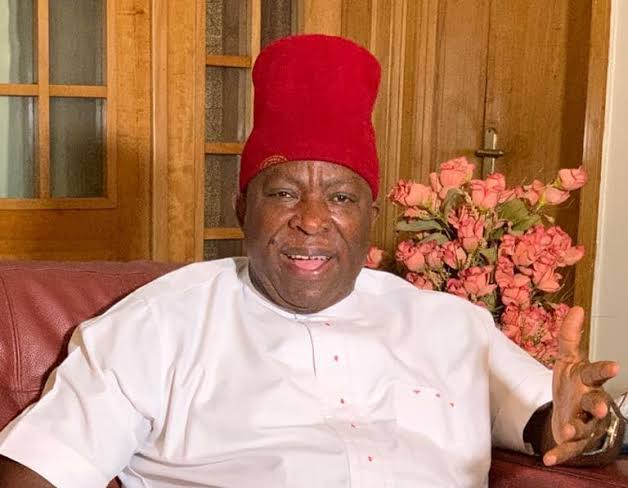 Chief Victor Umeh, former national chairman of the All Progressives Grand Alliance, APGA, and senator representing Anambra Central in the 8th National Assembly, has lamented the circumstances that led to his defection to the Labour Party, LP, saying that it was obvious that some highly placed people currently controlling the party did not want him to return to the red chambers on the APGA platform in 2023.
In an interview in Awka, Umeh stated that the good news is that the electorate will not be handpicked and enticed with the amount of money that was traded during the primaries, and that the voters will determine each candidate's fate during the election.
He also stated that what occurred during the APGA primaries provided him with the opportunity to reconcile with former Governor Peter Obi, who is the Labour Party's presidential candidate for the 2023 general elections.
"It is really sorry to leave APGA since I fought very hard for almost 20 years to sustain the party," Umeh remarked. But, based on how the primaries went, it was clear that they didn't want me there any longer.
"However, I didn't want them to cut short my desire to serve our people." The Senate of the Federal Republic of Nigeria is a crucial forum for furthering the people's cause. That is what compelled me to participate in the platform race.
"I conducted extensive research and received approval from all stakeholders before declaring." When those who didn't want me there realized they wouldn't be able to stop me, they turned to all kinds of shenanigans.
"The primaries could not have been transparent when influential people on the outside were urging delegates not to vote for me." With the circumstances in Nigeria, you can't expect hungry people to distinguish between some people's mission and ambition. Despite the bullying, 151 of the delegates voted for me, so I was pleased. By their announcement, I had lost the primary by only 11 votes, and following the declaration, some delegates advised that I demand a recount.
"The good news is that the electorate, not a handful of persons given money to nominate a candidate, will decide who goes to the Senate."
"As a Christian, I wish them luck and will continue to do what God has called me to do for our people."
"This APGA that people are remembering today was the work of Mr. Peter Obi and myself, and when Obi left, I stayed behind to see the party through to the governorship election last November."
"I'm not sure what influenced their decision to develop this conspiracy against me." I believe I do not deserve it, and the public has agreed. If I win the upcoming election, the 10th Senate will know that someone who only stayed in the 8th Senate for 17 months will do something that all Nigerians will appreciate in terms of allocations for infrastructure development, appointments at all levels, and anything else that government is expected to do for the people.
"Through the legislative process, I will contribute to the creation of a new Nigeria." In the 8th Senate, I was head of the Labour Committee that drafted the new minimum wage bill, so joining the Labour Party has brought me back to familiar territory."
"On Sunday after the primaries, Obi called to sympathize with me on the outcome of the APGA primaries and asked me to engage Labour Party leadership to see if I could have the opportunity to emerge as a candidate of the party," Umeh said of how he was able to mend fences with Obi after years of bickering between them.
"I contacted the leadership of LP, and they were ecstatic to hear that I was interested in their party." I immediately withdrew from APGA on May 30th and joined LP on May 31st. And they have unanimously chosen me to run for Anambra Central. I will devote my entire weight, experience, and knowledge to furthering the cause of this party.
"LP is a progressive party, and I am delighted to be transitioning from one great progressive party to another." My main goal is to see a South Easterner elected President of Nigeria in 2023.
"Our mission is to accompany Peter Obi across the country and campaign for LP candidates in all constituencies in Anambra so that we can win."
"This is a divine mission and God has intended it; I consulted widely and with all essential stakeholders, and they advised me to join Obi in LP and contest this election because our people stand to benefit much from my representation."
"When it appeared that there was no more hope for me to continue on this trip, a call came from an unexpected source, my estranged brother, Peter Obi, and that call brought peace between us, and we resolved to put our differences aside in the benefit of our people." As a result, I am grateful to His Excellency, Mr. Peter Obi, and the Labour Party's national leadership."
Next Post Previous Post
No Comment
Add Comment
comment url
Nigeria Elections 2023,Politics