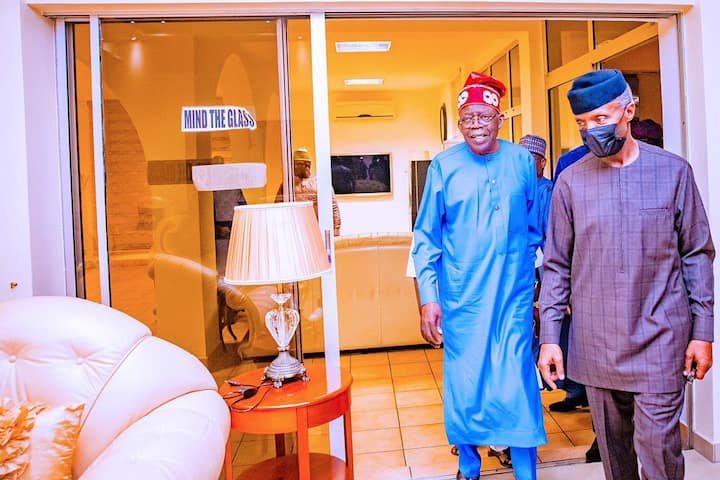 Asiwaju Bola Ahmed Tinubu, the presidential candidate of the All Progressives Congress (APC), paid a visit to Vice President Professor Yemi Osinbajo at the Presidential Villa, Aso Rock, Abuja, on Thursday evening, June 9.
Tinubu, according to sources at the vice president's residence, spurned any ill blood between him and Osinbajo, saying they are like brothers.
The visit came barely hours after Vice President Yemi Osinbajo congratulated Tinubu on his victory in the recently ended APC presidential primary poll and offered to work with him to win the general election.
Earlier, the newly elected APC presidential candidate paid a 'thank you' visit to President Muhammadu Buhari.
A source who was present at Osinbajo's apartment when Tinubu visited told Premium Times newspaper:
"We were just sitting there when the vice president called to say Asiwaju had arrived."
The source, who did not want to be identified because he does not have clearance to speak to journalists, said the former Lagos governor was upbeat throughout the meeting and spoke him about Osinbajo's services not only to him as a person but also to his political career.
He mentioned:

"He recalled the vice president's efforts in achieving legal victory for the disbanded ACN, particularly with the court case in Osun state."

According to the source, Tinubu recalled how Osinbajo traveled to the United Kingdom during a period of inclement weather to obtain fingerprint technology for use in court proceedings.
He continued:
"Asiwaju expressed surprise that some believe the presidential election will create a schism between him and the vice president." He said they'd come a long way and were now like blood brothers.
"What happened, he claimed, was merely democracy in action, and there was nothing wrong with it."
Tinubu was accompanied on the tour by the governor of Lagos State, Babajide Sanwo-Olu, and several other politicians.
Next Post Previous Post
No Comment
Add Comment
comment url
Nigeria Elections 2023,Politics