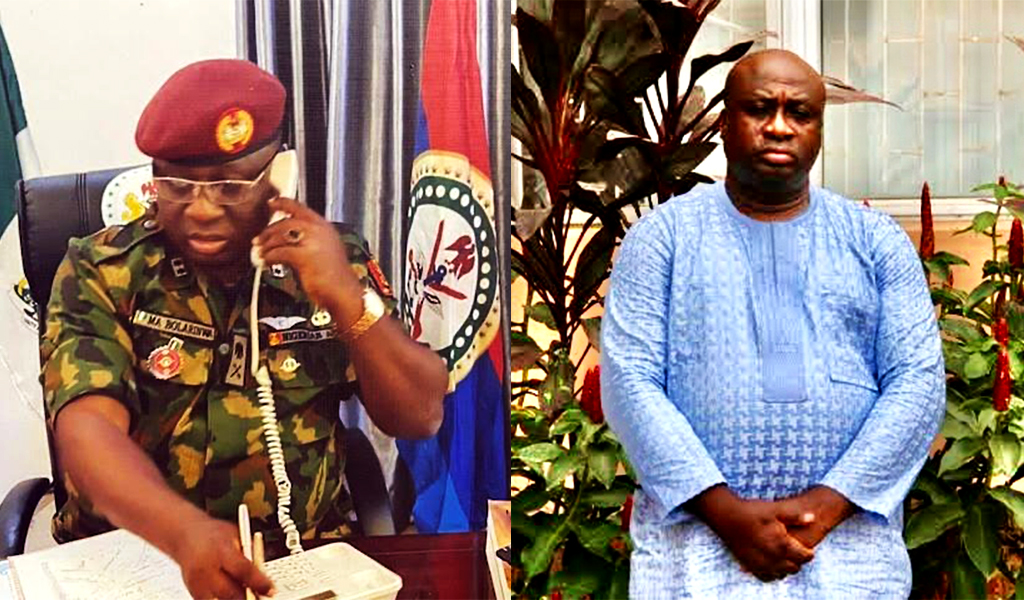 Mr Abiodun perpetrated a N266.5 million fraud in 2020 claiming to be former President Olusegun Obasanjo’s son and pitching for appointment as the Chief of Army Staff.

The trial judge, Oluwatoyin Taiwo, jailed him after he changed his plea from “not guilty” to “guilty” on all 13 charges on Thursday, according to a statement by the Economic and Financial Crimes Commission (EFCC).

Mr Abiodun was arrested by EFCC operatives at his house in the Alagbado area of Lagos State on January 12, 2022, for defrauding the complainant, Bamidele Safiriyu, of over N266.5 million.

The commission later filed 13 charges of fraud, forgery and others against him.

He pleaded not guilty to all the 13 charges when the anti-graft agency arraigned him on April 12, this year.

The court rejected his bail application and ordered him to be remanded in prison throughout his trial.

The prosecution subsequently opened its case on April 25 and subsequently closed on June 20 after calling six witnesses.

Testifying as the first prosecution witness, Mr Safiriyu told the court how Mr Abiodun allegedly defrauded him of about N266.5 million by posing as a son of former President Olusegun Obasanjo.

From ‘not guilty’ to ’guilty’

Mr Abiodun was to open his defence on Thursday.

But at Thursday’s proceedings, the defence counsel, Otunba Ogunleye, informed the court that his client had decided to change his plea, “rather than going through the rigours of defence”.

The prosecution did not object to the application, but noted that “the defendant has the constitutional right to do so, and we are still standing on the same charges.”

Thereafter, the 13 counts were read to him afresh.

“I’m guilty,” he said to all the counts, EFCC’s statement signed by the commission’s spokesperson, Wilson Uwujaren, stated on Thursday.

Following his guilty plea, the prosecuting counsel, Rotimi Oyedepo, gave a review of the facts, urging the court to rely on the evidence of the six witnesses presented by the prosecution and the various documents tendered through them as Exhibit A to W.

“We seek to rely on the unequivocal admission of the defendant by way of his plea admitting the essential ingredients of the offence against him.

“The law is trite, when the defendant pleads guilty to an offence the burden on the prosecution is as light as a feather.

“Even on the strength of his extra-judicial statement, it’s clear as crystal that the defendant admitted to the essential ingredients of the offences alleged against him.

“We seek your lordship’s order to convict the defendant as charged,” he said.

After the prosecution’s presentation, the defence lawyer, Mr Ogunleye, made a plea for mercy on behalf of the defendant.

In his allocutus, Mr Ogunleye urged the court to temper justice with mercy and to give “a very minimal sentence”, noting that the defendant was remorseful as “demonstrated by his willingness to change his plea and not to further waste the judicial time in this case”.

“He has a wife and several children as well as numerous extended family members under his care to whom he is the breadwinner,” he added.

Responding, the prosecuting lawyer, Mr Oyedepo, noted that the prosecution had no record of his previous conviction, but urged the court to impose a sentence to serve as deterrence to others who might want to engage in a similar crime.

He further urged the court to order the forfeiture of four vehicles recovered from him, a black Range Rover Sport, a black BMW, a black Toyota Landcruiser, and a white Toyota Hilux, and a property located at No 1A Joke Ayo Street, Riverside Estate, Alagbado, Lagos as part of restitution to the victim.

He also urged the court to order the closure of the First Bank account used to perpetrate the fraud. The convict was said to have changed the name of the account from Hassan Karim Ayinde to Bolarinwa Oluwasegun Abiodun to perpetuate the fraud.

He further urged the court to consider the fact that the document used for the fraud “was purportedly signed by the Commander-in-Chief, our current and sitting President of the country, the most revered office in the land”.

He prayed the court to impose a sentence “that will deter anybody from joking with that office”.

She noted that it was “so sad that people like the defendant have given our beloved country a bad image.”

“It is obvious that the defendant appears to be a very intelligent man, more is the pity that he could not put his ingenuity to better use.

“In the light of the seriousness of this scam, and in order to send a clear message to all scammers, fraudsters and criminals, this court is prepared to protect the interest of Nigerians and the society at large,” the judge added.

Sentencing the convict, the judge said: “I, therefore, sentence the defendant to seven years imprisonment without an option of fine.”

The court also granted the prayers of the prosecution for the forfeiture of the four vehicles and the property to help the victim recover his money. He was also ordered to pay N20 million as restitution to the victim. His First Bank account was also ordered: “closed forthwith”.

The commission said the alleged fraud, involving N266,500,000, was reported by Mr Sarifiyu and his firm, Kodef Clearing Resources.

EFCC said Mr Bolarinwa perpetrated the alleged fraud by posing as a General in the Nigerian Army.

It said the defendant made false representations to the complainant that President Muhammadu Buhari had short-listed him and one other to be appointed as the Chief of Army Staff, COAS.

He had allegedly told the complainant that he needed a short grant to “press and process the appointment.”

Mr Abiodun, who was arrested at his house in the Alagbado area of Lagos State on January 12, 2022, also allegedly forged a letter of appointment as COAS purportedly signed by the president and showed the same to the victim to further prove his claim.

In the said letter, he claimed that he needed to pay a certain amount of money into the coffers of the Federal Government of Nigeria, as part of the requirements for the appointment as COAS.

Mr Abiodun is also alleged to have, in May 2020, forged a Nigeria Army Identity Card with serial number 387140, claiming the same to have been issued to him from the Nigerian Army.

He is also accused of being in possession of a forged certificate of confirmation dated November 7, 2018, purporting the same to have emanated from the Nigerian Army Headquarters.

EFCC also accused him of being in possession of a forged document titled, ‘Letter of Authorisation’, purportedly signed by Mr Obasanjo permitting one Bamidele Olusegun Safiriyu of De-Rock Maritime Resource L.T.D. to enter Apapa Port freely and load their truck.

The commission also said six pump action guns, three cartridge bullets, a swagger stick, and several forged documents were recovered from him when he was arrested.