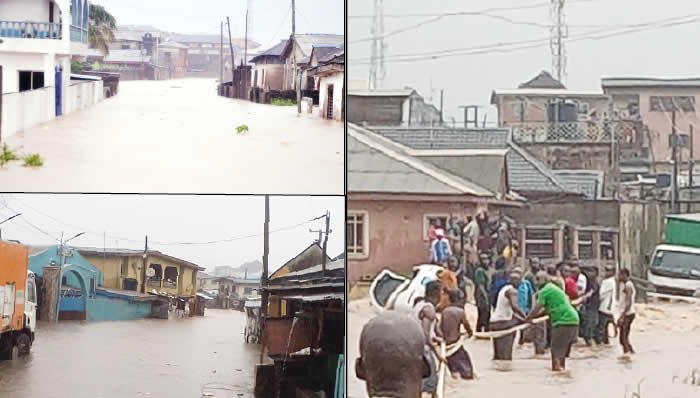 Four persons were on Saturday confirmed dead and 12 others missing when a boat capsized in the Ojo area of Lagos State.

The incident occurred two days after two female passengers died when a 20-seater boat, which departed the Ipakodo ferry terminal in Ikorodu, capsized.

It was learnt that the W19 passenger fibre boat carrying 16 passengers, including children, took off from Mile 2 on Friday night and was headed for Ibeshe.

It was, however, learnt that tragedy struck when the tide of the water forced it to drift to a stationary barge, causing it to overturn.

Confirming the incident, the Managing Director of the Lagos State Waterways Authority, Oluwadamilola Emmanuel, told one of our correspondents that the captain of the boat violated waterways rules by setting sail at 7pm.

Emmanuel, however, said the boat did not belong to the state government while the captain, whose whereabouts were still unknown as of the time of filing this report, could be referred to as a private operator because the boat came from a village in Ibeshe.

“It has nothing to do with the state. They didn’t take off from any jetty which was why they moved at that time of the night,” he said.

In a statement earlier, the agency said rescue operators found only the boat when they arrived at the scene, adding that it had been handed over to the Marine Police.

The statement read in part, “At about 7:45pm on July 8, 2022, the Lagos State Waterways Authority and National Inland Waterways Authority received a distress call of an incident on the waterways. A W19 passenger Fibre boat carrying 16 people capsized along the Ojo area of the state”

“The boat going from Mile 2 to Ibeshe in the Ojo axis broke the waterways rules of late travelling by setting sail at 7pm. As he set out, the tide of the water drifted the boat to a stationary barge which caused the boat to overturn.

“It is said that all passengers on board, which include children, were not all putting on their life jackets. The search and rescue team of the LASWA, National Inland Waterways, Nigerian Marine Police, and the Lagos State Emergency Management Agency were immediately mobilised to the scene of the incident. But unfortunately, they could only find the boat after several hours while efforts are still ongoing to locate the victims.”

After a downpour in Lagos on Friday and Saturday, floods overran many areas, leaving residents in fear and property destroyed. Area worse hit by the downpour was Oko Oba, Agege, Lagos.

It was gathered by Sunday PUNCH that the flood swept away a Lexus Jeep around Fatoki area of Orile, Agege.

Seven people were reportedly swept away by the flood. Five persons were rescued but two declared missing.

A resident in the area who witnessed the incident, Kokanam Praise, told Sunday PUNCH, said that the driver of the Lexus Jeep was coming towards the flooded road but advised to go back.

Praise stated, “One of the cars went back but this particular one continued moving until his car was submerged in the flood.

“They were about seven. Four people initially swam out of the flood but one was rescued by the members of the community. They are stable. But, two people are still missing. From what I know, two people have not been found.’’

Also, another resident who gave her name only as Inem, told one of our correspondents that the noise from his neighbour made him rush out to see what was happening and saw a car submerged in a flood on the street.

“It is a normal thing for us in Agege. Any time it rains for some hours, everywhere will be flooded and we will be forced to use alternative routes or swim.

“We have seen five of the people from the Lexus but we are still in search of two. Since 3pm when the others were rescued, we have not seen the other two. I don’t know how to feel about this. The Lexus driver was warned not to drive through the water,” Inem stated.

Confirming the incident, the Lagos State Coordinator, NEMA, Mr Ibrahim Farinloye, in a statement sent to Sunday PUNCH on Saturday, said, “Four people have been rescued alive from the Lexus Jeep that was swept away in violent flooding that is ongoing around Fatoki area of Orile Agege.

“Seven people were reported to have been swept away when rainwater overflow an uncompleted Canal in the area.

“The residents reportedly warned the people in the two vehicles, 4 in LEXUS and three in Toyota, to desist from passing through the road but they were adamant but drove through and swept away.

“Lagos State Fire Service as the lead Agency in this incident has been performing yeoman jobs. NEMA, LASEMA, the police and other responders are assisting the fire service in the operations. Search and rescue operations are ongoing in search of the other three people.

“The community members are mobilised due to the fact that they know the terrain of the well and successfully rescued the four people.”

As of the time of filing this report, two people were still reportedly missing and their whereabouts yet unknown by NEMA.

Meanwhile, the Lagos State Government has sympathised with residents over the ‘flash floods in several areas in the state,’ stating that the Oko Oba drainage channel was undergoing expansion.

It also urged motorists and pedestrians to avoid wading through floods during rainfalls.

The government spoke in a statement on Saturday by the Director, Public Affairs, Ministry of Environment and Water Resources, Mr Kunle Adeshina.

Adeshina stated that the Oko Oba Canal in Agege was being expanded to allow for the containment of more stormwater that would reduce flooding in the area.

“The flash flooding on old Oko Oba Road followed the ceaseless rainfall of over 10 hours that led to the overflowing of the Oko Oba Canal Channel which is presently undergoing expansion.

“The state government has always advised that motorists and residents should be cautious and refrain from wading through flood waters during heavy rainfalls largely because of the dangers inherent in it.

“The contractor handling the expansion project has been slowed down by the intensity of the rains of the past weeks but is committed to a completion of the project,” the statement read in part.