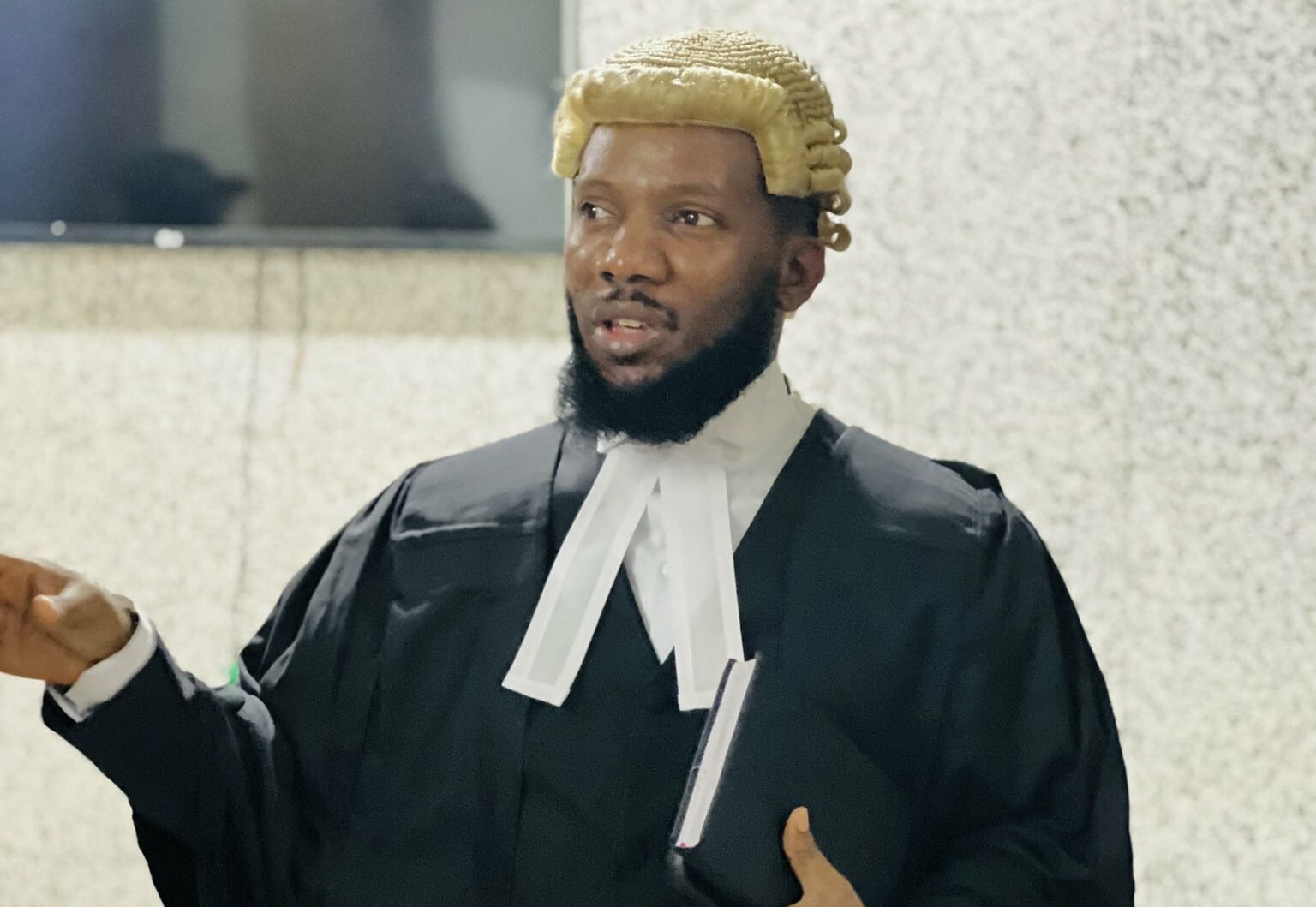 A House of Representatives candidate in Akwa Ibom State, Clement Jimbo, on Thursday, went on a solo protest walk in Uyo over the committal of a lawyer, Inibehe Effiong, to prison in the state for alleged contempt of court.

Mr Jimbo is the All Progressives Congress (APC) candidate for Abak/Etim Ekpo/Ika Federal Constituency for the 2023 general elections.

The candidate, holding firmly with two hands, about four different placards, walked from a popular roundabout in Uyo to the judiciary headquarters, along Wellington Bassey, which is a few metres away from the Government House.

He wore a black suit, with a gold-colour tie.

Some inscriptions on the placards read: “My generation cannot be cowed to silence by the judiciary. #FreeInibeheEffiong” “Allow my generation to breathe” and “My generation is more. Respect our rights.”

“Free Barrister Inibehe Effiong, he has done no wrong,” Mr Jimbo intermittently shouted as he walked along the side of the less busy road. He received a few cheers from passers-by.

“The brave ones, the strongest ones among my generation, cannot be cowed to silence. We cannot allow this precedent to stand,” he said in the broadcast.

The broadcast ended when Mr Jimbo got close to the gate of the judiciary complex where the Akwa Ibom Chief Judge, Ekaette Obot, has her office.

Mr Jimbo later told PREMIUM TIMES that the guards at the gate of the judiciary complex tried to harass him, but he told them he has the constitutional right to peaceful protest.

The chairman of the Nigerian Bar Association, Uyo branch, met him at the entrance of the complex and told him there was no need for any protest because the NBA was looking into the matter, he said.

“I told him to better do it fast because it is a precedent we cannot allow to stand,” Mr Jimbo said.

A Facebook user, who commented on Mr Jimbo’s live broadcast, expressed the fear that the solo protest could hurt the APC candidate’s chances in the election. 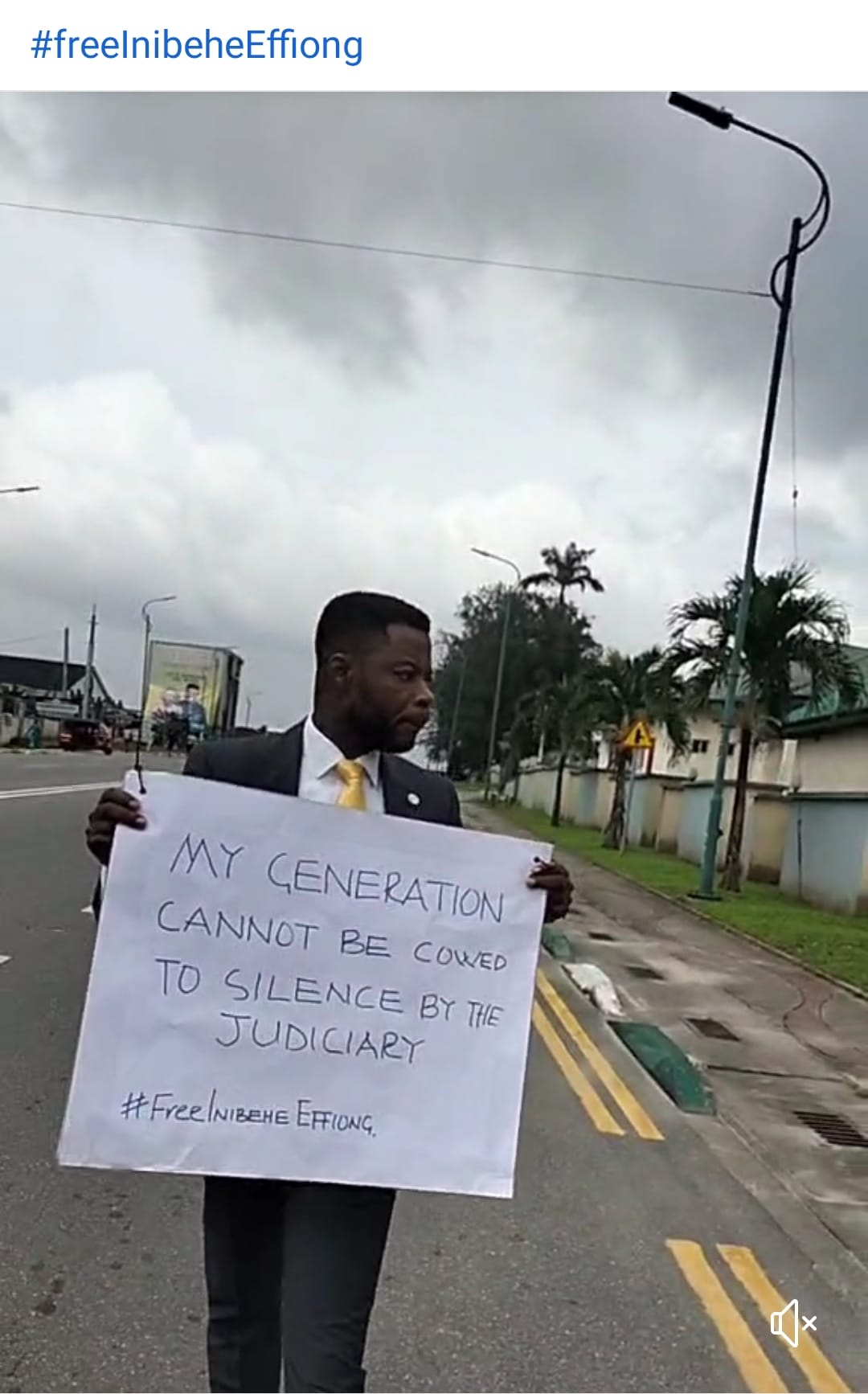 “We need to have a country that is ruled by laws and human rights are respected before we can even talk about being a candidate, let alone representing the people.”

Mr Effiong is a lawyer to a defendant, Leo Ekpenyong, in a defamation suit in which the Governor of Akwa Ibom State, Udom Emmanuel, is the plaintiff.

The case is before Justice Obot’s court in Uyo, although Mr Effiong had requested that the judge recuse herself from it.

But the lawyer said he did not insult the judge or do anything wrong during the proceedings.

Meanwhile, the President of the Nigerian Bar Association (NBA), Olumide Akpata, has assured that Mr Effiong will be released “shortly”.

Mr Akpata said the NBA would investigate to determine what transpired between Mr Effiong and Justice Obot, before deciding on the next steps.