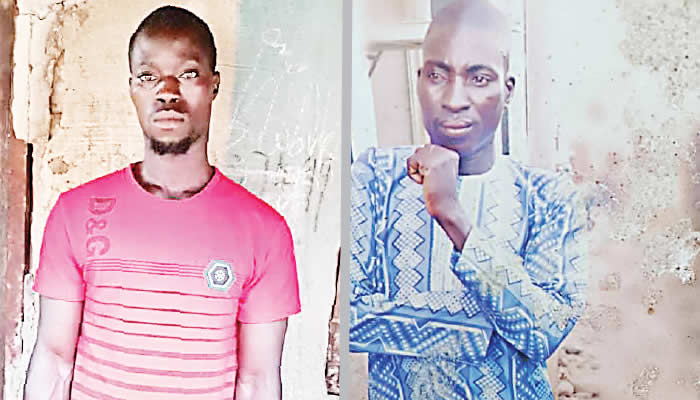 Tell us about yourself.

My name is Yohanna Anva. I am 27 years old and I am an SSCE older. I am Eggon by tribe and I was born and bred in Lafia, the Nasarawa State capital. I currently work with a block industry because I could not find any meaningful job to do with my present qualification.

Who are you to the late Danladi Anva?

I am his oldest child and the first son of the family. My parents gave birth to six children, three males and three females, but I recently lost one of my younger brothers so we are five now.

What was your late father’s occupation?

My father was working as a security man at the Evangelical Reformed Church of Christ located in Sabon Pegi, Shabu, Lafia Local Government Area. He was also into farming. He planted all kinds of crops during the rainy season so that we can have food to eat, as his salary was not always sufficient for the family.

He had time to farm because the church employed two security men to guard the premises, my father and one other man. The church approved that each of them should work for two weeks in a month to enable them to have time to do other things that will help them survive the economic realities.

How much did the church pay him as salary?

What led to his death?

The whole thing is still like a dream to me. It is still hard for me to believe that my father is dead. I am shocked because he was a very healthy and lively man.

It happened that he sold a particular plot of land to two different people. He first sold the land for N150,000 to a woman living in our neighborhood in 2021, then he sold the same land for N230,000 to a man who had an urgently need for land this year, 2022. When I heard that two people paid for the land, I approached him to get clarity on the matter but he did not say anything to me.

As time went on, I thought he had paid off the woman who first bought the land so I relaxed on the matter. I never knew that he did not return the money until towards the end of May 2022 when the woman came to our house angrily to inform us that someone had trespassed on her land.

She told us that she went to the land for inspection only to notice that an unknown person had planted crops on the land. At the time, my father was not at home so I appealed to her to come back later to have a clear understanding on the matter from my father.

But, while we were expecting the woman to come back for an explanation about the land, she went to the police in our area to report the matter and some officers were mobilised to arrest my father.

He was at the police station for a few days and I can tell you that we really suffered before he was released from detention. We had to pay N12,000 to the police for his bail.

On his arrival at home, I noticed that he was always moody and I made efforts to know what was wrong but he did not say anything to me. My father was a very quiet man, he hardly told us about his challenges. I had a feeling that he was depressed.

He actually died four days after returning from the police station. On that fateful day, June 5, 2022, after we returned from church, he was at home with us until 3pm when he had a bath and went out. He did not tell us where he was going to but we knew that he was not going too far because he dressed casually. My siblings and I were at home throughout the day, doing our domestic chores and other necessary things. To our greatest surprise, our father, who went out completely healthy, returned home that evening very sick. He appeared like someone who had little or no strength in him. I told my siblings that we should take him to his room to rest and then find a solution to his health challenge.

After some time, I went back to the room to check on him but to my greatest surprise, I noticed that he had drunk the insecticide we used in preserving beans in our farmland.

Did you meet him drinking it or found the bottle of the insecticide with him?

I perceived the smell of the insecticide from his mouth, then I searched and found an empty container of the insecticide with him. At that point, he could not speak to us because he was already very weak and almost lifeless; so we decided to rush him to the Primary Health Care Centre in Kwanderre, Lafia Local Government Area, for treatment. But on getting there, the health centre referred us to the Dalhatu Araf Specialist Hospital in the same Lafia LGA, where he was admitted and received treatment but later died.

Do you think his decision to drink the insecticide was connected to the police case?

I wouldn’t know. When he returned from the police station, the first buyer of the land, who arrested him, came to our house with her husband and they discussed extensively with my father. I gathered that the conclusion of the meeting was that my father would get another land for her. But he unfortunately died few days later. I don’t know if he was under any pressure from the buyers because he did not mention any of such to us.

Did he share some of his worries with you or other family members?

He did not tell any of us about his worries and he did not mention to anyone that he planned killing himself; we would have stopped him at all costs. The only known challenge at that time was the land issue and we did not imagine that he could take his own life because of it.

Was the family surprised at the manner of his death?

We are still surprised till today. Accepting the reality that he killed himself was not easy for me. But my siblings and I have accepted our fate. He is dead now; though painful, we have to move on with life.

Has he been buried?

Yes, he has been buried. He was buried the same day his corpse was brought to our family compound. There was no need to delay, especially because of the circumstances surrounding his death.

How old was he?

He was 55 years old before he died.

How will you describe him?

My late father was a community man, friendly and was someone who worked for the peace and progress of society. He detested all forms of crime. He was also a great farmer who ensured that we did not lack foodstuffs at home. He told us that he went into farming because his salary as a security man was not sufficient to meet the family’s needs. He was a good father to all his children. He was a great inspiration to me. Even in the midst of lack and bigger challenges, he kept encouraging me not to give up. Well, I do not know exactly what pushed him into taking his own life but I can assure you that my father was a great man. He was a huge pillar in my life.

Where is your mother now; and how is she taking her husband’s death?

My mother is dead. She died in 2019 during childbirth. She was to give birth to the seventh child of our family when she died.

Her death was very tragic for my father and the entire family because she really supported my father while she was alive. She had a petty business and she was also a great farmer. We really miss her.

My siblings have been crying since our father died too. We are still very young but we have suddenly become orphans in this difficult world. But I believe that God Almighty will always come to our rescue whenever we call on Him.

As the eldest son, do you plan to replace your father at his workplace?

Yes, I have spoken to the pastor and other leaders of the church of my interest to continue the job and they assured me that after we finish mourning our father, either me or my younger brother will be given the job.