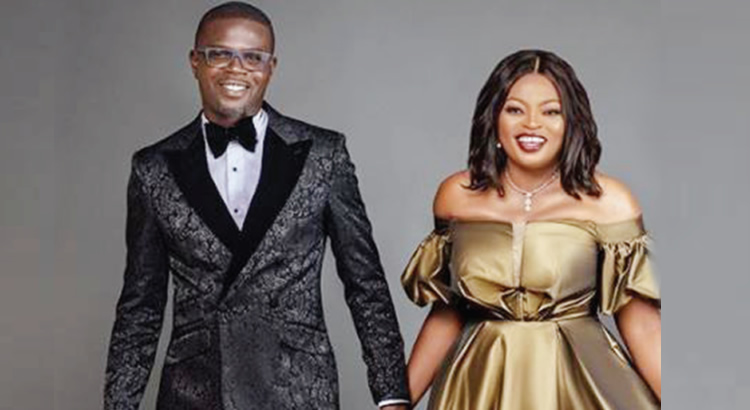 JJC Skillz took to his Instagram page on Thursday morning, June 30, 2022, to inform fans that he had separated from his estranged wife.

He wrote, “Dear friends and family, I need to let you know that Funke and I have separated. While it lasted, we shared a lot of things together and have created two beautiful children. The last two years have been extremely difficult for us. I know I have tried my best to fix things but I believe it is beyond repair now.

“Three months ago at Funke’s insistence, I moved out of the house. Aside from the Africa Magic Viewers Choice Awards, I have not been able to get Funke to sit down in an amicable manner to discuss the future of our relationship.

“I am making this announcement, so that the public is clear that we are both pursuing separate lives. We still have issues that need to be addressed such as the custody and wellbeing of our children, which is paramount, as well as business interests which need to be disentangled. But, I have no doubt that these will be resolved one way or the other.”

Since the marriage break-up was announced by JJC, it has continued to be a trending topic across most social media platforms, including Facebook, Instagram and Twitter.

As with issues like this, the opinions have been varied, with some accusing Funke of being the reason for the marriage crash, while some laid the blames at the feet of JJC.

Showbiz personality, Soso Soberekon, wrote, “As a man, no matter how hungry you are, never become a wife.”

Controversial cleric, Johnson Suleman, said, “Stop disturbing us with break-up stories. When they bought you shawarma, did you give us?”

“I tweet random things, including parables, jokes and other comments. It must have been a co-incidence. It is a sin to mock people. Disregard any insinuations; it was a joke and nothing else.”

Media personality, Toolz, was sarcastic in her reaction. She wrote, “We do not live in their house but it has to be Funke’s fault because she is a successful woman. What a lazy narrative. Ladies, please do not get too successful.”

Controversial on air personality, Shade Ladipo, also wrote, “Father, may we not marry principalities that disguise as husbands.”

Actor, Stanley Nweze wrote, “I know that people are passing through a lot in marriages but sometimes, for the sake of your children, try to make things work.”

Another actor, Samuel Jemitalo wrote, “Men, never marry a woman that has ‘made it’; she would never respect you.”

Though some people were shocked at the crash of the union, many were not surprised because for some time, there had been hints that there was trouble in the ‘paradise’ of the hitherto power couple.

Sometime in 2022, one of JJC’s three baby mothers, Mella, had accused the singer of physically assaulting and inflicting grievous bodily harm on their son, Benito.

Around that time, Benito also took to social media to allege that all was not well in the home of the actress. According to him, both JJC and Funke cheated on each other. He said, “Funke accuses everyone of dating my dad but your beloved had cheated on my dad. My dad cheated too.

However, as hints surfaced on social media that the couple’s union was shaky, they both presented a united façade to the public.

After his son’s claim, JJC, who was in London at the time (April), wrote on his Instagram page, “The only rock that stays steady and the only institution I know that works is marriage.

“London is cool but I’m missing home, @funkejenifaakindele and my children. See you soon at home. Don’t let anyone spoil your vibes, Bellos forever #devilisaliar.”

On Father’s Day less than two weeks ago, Funke took to social media to celebrate her husband and father of her children on Father’s Day about two weeks ago. At the time, many took Funke’s post to mean that the couple was not estranged. She wrote, “Happy Father’s Day, darling. Thank you so much for being a wonderful and caring father. We love you, and may God bless you more, baba ibeji (father of twins) of life!”

However, with JJC’s announcement, it means that as of the time she made that post, they were no longer living together.

Although they were both seen together at the Africa Magic Viewers’ Choice Awards on May 14, 2022, it has now been revealed to be just a façade as according to JJC, Funke had told him to move out of the house as of that time.

When Funke went on the stage to receive the award of ‘Best Actress in a Comedy’ for the movie, ‘Omo Ghetto’, she was accompanied by JJC and some other people. In her acceptance speech, she said, “Again, thank you so much to my fans, my family, my siblings, my husband and my beautiful children— Zack and Zion.

“I dedicate this to all the cast and crew of the movie. I want to say something quickly— no matter what you face in life, do not forget your purpose.”

With the break-up of the marriage, it remains to be seen how both parties will navigate their business relationship. JJC admitted this much when he stated in his ‘break-up statement’ that they will have to ‘disentangle’ from their business ventures.

Though it has been widely speculated that they both co-own Scene One Production Limited, Saturday Beats cannot independently verify that.

One of our correspondents visited the website of the Corporate Affairs Commission, which is the body saddled with the registration of businesses in the country. On the website, the status of the company which was said to have been registered on September 7, 2018 is said to be ‘inactive’.

Meanwhile, the company’s website states that it is a creation of Funke. The ‘About Us’ section of the website states, “Sceneone Production Limited is an educational platform created by the popular Nollywood actress, Funke Akindele.”

While this is not Funke’s first marriage, JJC had never been married before though he has three children from three different women. She and JJC got married in May 2016 in the United Kingdom, where JJC was originally based.

Recall that Funke got married to her first husband, Kehinde Oloyede, who is the incumbent chairman of the Oshodi-Isolo Local Government in Lagos, in May 2012. However, the couple separated barely a year later in July 2013, citing irreconcilable differences.

Admitting that the marriage ended in a bad way, Funke told media personality, Chude Jideonwo, in August 2021, “I went into the (first) marriage (and) it did not work out. It ended in a very bad way on social media. The noise was everywhere. I was actually filming when somebody called to inform me; I wanted to die…”

On the lessons she learnt from the crashed marriage, the actress said, “As a young lady out there, do not be pressured into getting married. Get married because you love the person and want to spend the rest of your life with him; not just because you want to get married.”

On his part, JJC had never been married until he met Funke, but he has three children

Recall that one of his children’s mothers, Mella, was in the news recently when she and her son, Benito, stated that all was not well with the marriage between JJC and Funke.

In a series of posts on Instagram, she had accused Funke of being irrational and treating her son badly. She also revealed the face of the couple’s twin children against the wish of their parents.

One of the posts she made in April 2022 read, “First, I want to highlight what kind of woman Funke Akindele is. She claims to be a sweetheart but that is just a carefully crafted public relations image.

Taiye Fajesimi is the mother of the singer’s first child, a 24-year-old lady, and they seem to be on good terms. While the break-up rumours were trending last year, Fajesimi assured JJC Skillz that he would always have her support.

A Lagos State-based pastor, Olagorioye Faleyimu, had in his widely criticised 2017 prophecies, claimed that the actress would neither have children nor a successful marriage. Faleyimu, who is the owner of the Mountain of Blessing and Miracle Church of Christ, had said, “A popular actress, Funke Akindele, should pray deeply so as to have children.

“Whoever marries her must have another reason (for doing so) because the issue of not having a child will keep coming up, and it will scatter the marriage. If she refuses to ‘do’ the prayer, she would end up adopting a child and by that time, she would be living alone without husband.”

However, the pastor and his prophecy turned out to be inaccurate as the Bellos welcomed a set of twin boys in December 2018.

In the eye of the law

On what legal options are available to both parties as regards the custody of the children and disentanglement of their business interests, a lawyer, Idris Balogun, noted that there are different ways to approach the issue.

As regards custody of the children, he said, “In a statutory marriage, the principle of law is settled with respect to the custody, welfare and education of the children of a dissolved marriage. Thus, in awarding custody of a child, the court will consider the care of the child’s person— morally, physically and mentally.

On how joint properties will be shared, Balogun said, “Sharing of property after divorce is granted during divorce proceedings. In customary marriage, the woman is not barred from acquiring her own properties. However, when such marriage is dissolved, the woman has no right to claim for settlement of property even if she contributed to the acquisition of such property.

“In a statutory marriage, either parties can apply to the court alongside the petition for the settlement of the properties.”

Asked if either party can expect to be given financial compensation for the crash of the union and care of offspring produced in it, another lawyer, Femi Njoku, said, “The husband will not be entitled to anything from his wife. The only things he is entitled to are the things they collectively have. For example, if the couple had a house together, they would sell the house and share its proceeds equally.”