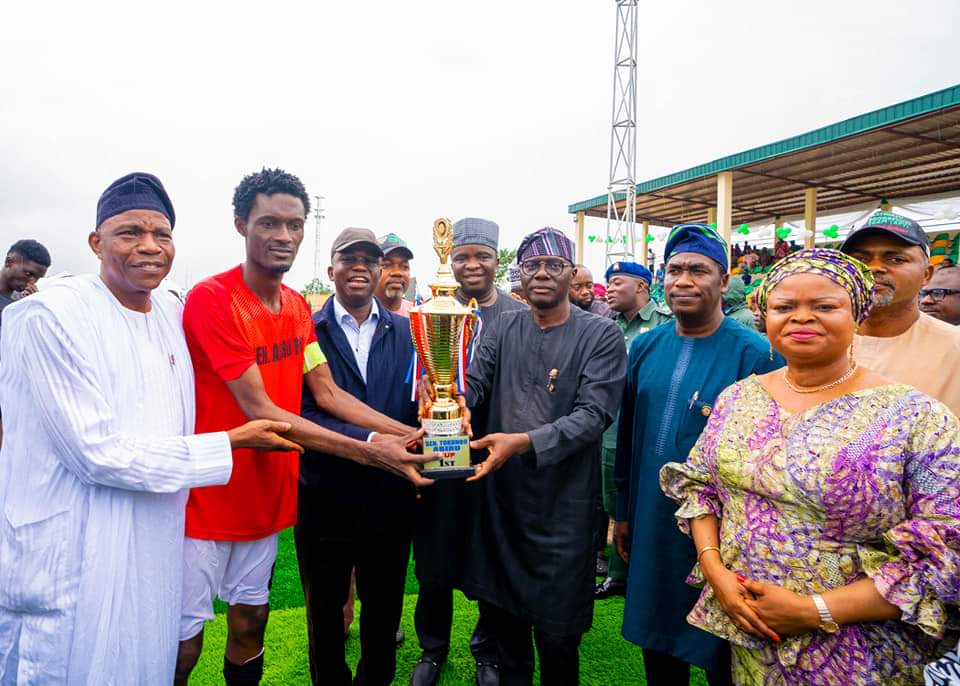 The senator representing Lagos East, Tokunbo Abiru, on Thursday unveiled a 960-capacity mini-stadium in the Epe area of the state.

The projects were facilitated through the office of the Sustainable Development Goals(SDGs).

The senator also empowered about 1,250 market women and traders with N50,000 each as financial grants. The Iya Olojas within the 16 local government areas and local council development areas in Lagos Easttotalling N62.5 were given the responsibilities of selecting 50 members each. The remaining beneficiaries were nominated by the party structure.

The empowerment also includes the distribution of Hand-planters to about 200 farmers, along with financial grants of N20,000.

Mr Abiru gave ₦20,000 grant to 200 farmers [PHOTO CREDIT: Premium Times]“These projects and support for market women and rural farmers are part of the fulfilment of the social contract I solemnly had with the people of the Lagos East Senatorial District while seeking their mandate in 2020,” said Mr Abiru.

In his remarks, Governor Babajide Sanwo-Olu lauded Mr Abiru for the projects.

“Over the last 18 months, Senator Abiru has dutifully delivered the dividends of democracy in several areas and on multiple fronts, not just in the primary mandate of law-making, but also in terms of life-changing empowerment and endowment,” said the governor.

“Today, we are here to commission a number of infrastructure projects by him, some of which are facilitated through the Office of the Special Assistant to President Buhari on Sustainable Development Goals (SDGs), occupied by an esteemed daughter of Lagos, Princess Adejoke Orelope-Adefulire”.

Mrs Orelope-Adefulire said the Office of the SDGs in the presidency had facilitated rehabilitation of over 10 schools and four healthcare projects in the Lagos East Senatorial district.

A novelty football match was played on the pitch new between Tokunbo Abiru Football Club and Epe Alaro United.