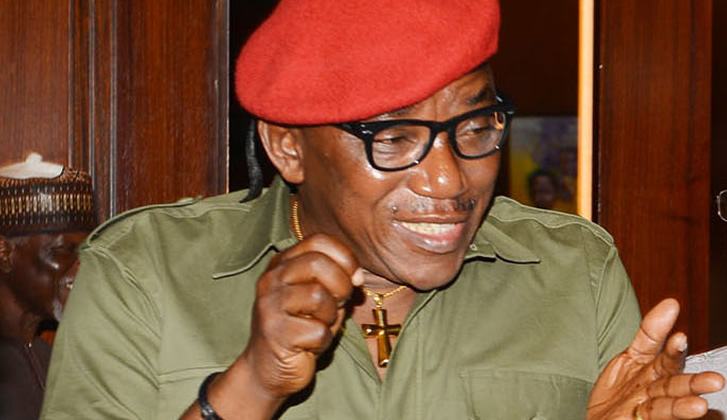 In this interview with JAMES ABRAHAM, the Plateau State Social Democratic Party’s candidate for the House of Representatives, Langtang North/Langtang South Federal Constituency, Solomon Dalung, speaks about the Muslim-Muslim ticket of the All Progressives Congress and assesses the incumbent governor, Simon Lalong’s administration

How much support are you getting from your new party, the SDP, to represent Langtang North/Lantang South Federal Constituency after resigning your membership from the All Progressives Congress?

So far, so good, we are ready as a party. The SDP is the second oldest party in Nigeria after the Peoples Redemption Party. It’s not a new party to our people except that the two mega parties have dominated the landscape. I have taken the SDP ticket.

In fact, we have just concluded a project on the permanent voter card mobilisation of our people. The SDP is the party to beat for the House of Representatives seat for the Plateau State’s Langtang North/South Federal Constituency and we are ready to emerge victorious come 2023.

Don’t you think the APC will win in the 2023 presidential election?

I don’t think so. It is going to be a serious and herculean task for the party to win because, apart from squandering the goodwill of managing the country in the past seven years, the APC has also introduced a dimension that is going to make it impossible for it to be an option for Nigerians to consider. If it had performed, Nigerians would have overlooked the issue of the same religious ticket it introduced.

What do you make of the controversy over the APC’s Muslim-Muslim ticket?

It’s the highest manifestation of religious intolerance and insensitivity to the sentiments of Nigerians and an attack on our diversity that has squandered the goodwill of Nigeria.

For me, the worst thing the APC has done is to bring in a joint religious ticket from the same faith. The Muslims in this country have twice elected southern Christians as northern deputies. So, why would Tinubu, the APC presidential candidate and the APC think they would not elect a Southern Muslim and a Northern Christian as his deputy?

The reason why he thought of changing this tradition is that it creates more fear than the ticket itself because it means he has something he is hiding away from Nigerians.

What do you think he is hiding from Nigerians?

What I suspect he may be hiding from Nigerians is that he may be playing the script of an unpatriotic political elite that uses religion to manipulate people and access power.

In reality, they are not religious people because, once they form a government, they use nepotism to appoint family members, in-laws, and other unqualified people to strategic government positions. Their children will be marrying each other and their cronies using the state’s funds.

That does not resemble an agenda for national development; an understanding that there is endemic poverty; hunger; and unemployment ravaging everywhere.

For me, there is a hidden agenda that they are playing the religious card to get power just for the sake of getting power and using it irresponsibly. If they get the power, then they will now manifest their real intentions.

What do you make of the continuous detention of former Governor Joshua Dariye and others despite the state pardon granted to them by the Federal Government?

It is part of the deceit of the Federal Government because the President cannot pronounce an amnesty on citizens and the certificate of release would not be issued until many months after that pronouncement. That tells you how disorganised the APC administration is currently.

It shows the unpreparedness of the APC to govern the country. I think it is a sad thing that the government will make a pronouncement and not implement it at the same time. It has not come out to tell Nigerians why they have continued to hold them in custody.

Now the burden lies with the Attorney-General of the federation to explain why that is the case.

For the purpose of emphasis, let me clarify that the President cannot take back the state pardon granted to those citizens and he cannot withdraw it because there is no provision in the law that gives him the power to withdraw the amnesty that has been given.

The Christian Association of Nigeria and the Pentecostal Fellowship of Nigeria had earlier warned parties against a Muslim-Muslim ticket, saying Christians would not vote for such a ticket. Do you think the plan of the APC to retain power will suffer if Christians boycott the APC?

When you introduce religion, you have to also define your friends, opponents, and allies. Assuming the Muslims in Nigeria believe that they are the majority, there are three major religions in Nigeria, which are Christianity, Islam, and the traditional religion. The question that Muslims or those supporting the Muslim-Muslim ticket would have to deal with is, will the traditionalists go with Islam or Christianity? The certain answer will be that the traditionalists will go with the Christians despite their differences.

This is because the Islamic fundamentalist groups that have emerged and been attacking people in Nigeria have painted Islam in a bad light in the eyes of ignorant Nigerians.

Thus, it would be very easy for politicians to manipulate religion and whip up sentiments. I want to assure you that Muslims marry four women. Traditionalists marry more than four, some even 10 or 20. The most populated religion in Nigeria has not spoken, and because of that, we are jostling about claiming superiority in figures because we gather on Friday and Sunday. I know for a fact that there is a man in my local government, a traditionalist, who has 87 eligible voters in his house and you can count them. Once you deploy religion, other religions will look for their allies and align, and either way, whether the Christians lose or win, or the Muslims win or lose, Nigeria is not going to be the same.

So it’s a very dangerous experiment that is facing the current Nigerian situation.

The insecurity in Plateau State seems to have moved to the southern part of the state with the recent killing of over 100 people in Kanam and other communities in Wase. How do you view this development?

It is just a reflection of the security challenges Nigeria is faced with. There was intelligence long ago of arms-carrying men fighting within some forests around Wase and the Southern Zone of the state, but the government did not take any steps up till now when they (the gunmen) started attacking people.

The southern zone is no stranger to this kind of development.

In 2001 and 2005, the southern zone was characterised by this act of banditry, but then, there was national denial, so the appropriate name and nomenclature were not used, but the zone survived it because the communities, when they realised the inability of the security services to defend them, of course, took their destinies into their own hands and mobilised and overran these invading forces.

With a few months remaining to the end of his eight-year tenure, how would you assess Governor Simon Lalong’s administration in Plateau State?

Even he himself is dissatisfied that he has not done well and that his conscience should guide him.

As for me, he disappointed some of us because he failed woefully to fulfill any of the promises he made to the people, just like the APC at the federal level.

For almost eight years he has been in the saddle as a governor. He has nothing to show for it.

Lalong and his supporters have always insisted the APC government has done well, citing what they called legacy projects across the local government areas.

Even the devil has good reasons to defend “himself” and claim that he has been doing well when he has not. You don’t expect him to accept the shameful reality without having to defend himself.

However, any defence he and his cronies may want to put up will collapse. If you take the resources that accrued to his administration in eight years and put them against the so-called legacy projects, you will discover that 10% of the resources didn’t go to those legacy projects that are the sole basis of the analysis of his performance as governor.

We don’t need him to show us projects as legacy projects.

In fact, there is one of the so-called legacy projects, a two-block classroom that I constructed as a minister that he claimed to have done as a legacy project. The legacy projects are still contestable, but I would not expect him to be quiet. He would deny it, but the people know whether his denial is genuine and fair or manipulative.

Which of the classrooms are you referring to?

They are the two blocks of six classrooms in my hometown, my alma mater, the LEA Primary School, Sabon Gida, in the Langtang South Local Government Area. I inaugurated it, and a year later, when I left office as a minister, the governor came and inaugurated it again as part of his legacy project.

How do you view the failure of the Eagles to actually qualify for the World Cup?

Well, I don’t want to talk so much about sports because what is going on in the sports sector is lamentable and I still wonder why the Federal Government or the President has not looked backwards in that direction and done something.

You cannot tell me that in basketball, two national teams both women and men, qualified for the world cup and suddenly, the minister would write a memo to you as the President and advise you that because of a crisis, Nigeria should withdraw from international sports and the career of these young people would be ruined. The players are children of Nigerians who left this country. They were born outside this country and they would have told them that Nigeria is not a country worth dying for.