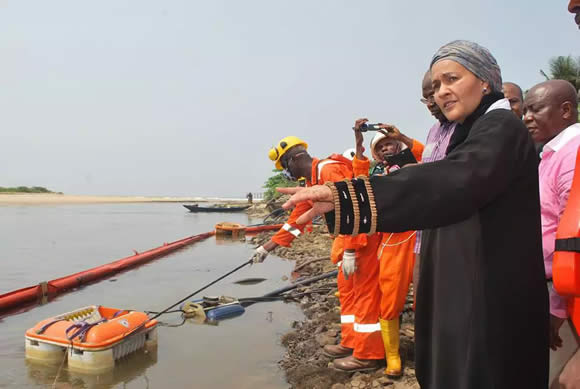 A group, Youths and Environmental Advocacy Centre, has rejected the transfer of the Hydrocarbon Pollution Remediation Project to the Ministry of Niger Delta Affairs by the Federal Government.

The group said the decision by the President, Major General Muhammadu Buhari (retd.), was not the solution to the slow pace of work on the Ogoni clean-up being handled by HYPREP.

The Executive Director, YEAC, Fyneface Dumnamene, said this in a statement issued in Port Harcourt on Friday.

Buhari, represented by the Minister of Transportation, Mu’azu Sambo, had on Thursday in Abuja decried the slow pace of the Ogoni clean-up and announced the transfer of HYPREP to the Ministry of Niger Delta Affairs.

But Dumnamene said in the statement, “The YEAC rejected the President’s action as it is not the solution to the slow pace of work that has characterised the project since inception.”

He alleged what the minister had done was to pave the way for the project to go to the ministry with her to further superintend over it.

Dumnamene stated, “It is regrettable that this is coming at a time when the new HYPREP project coordinator, Dr Ferdinand Giadom, and Minister of Environment, Mohammed Abdullahi, barely took over months back.

“With some actions like linking Ogoni land to the Afam power station, sustenance of efforts on the provision of portable water and steps taken to commence the Centre of Excellence and Integrated Soil Management Centre, remediation of complex sites are being done; a distracting and frustrating action of this nature will tip-toe into the project.”

He, however, noted that Buhari might not be aware of the transfer of HYPREP to the Niger Delta Ministry, or may have been deceived to do so by those who want to further frustrate the project.

The YEAC executive director said there was a need for investigation and perpetrators must be made to face justice.

Dumnamene also demanded the resignation or sack of Ikeazor and the return of HYPREP to the Environment ministry and called for the enactment of a law for the agency to be an independent body with equal legal standing with the Independent National Electoral Commission.