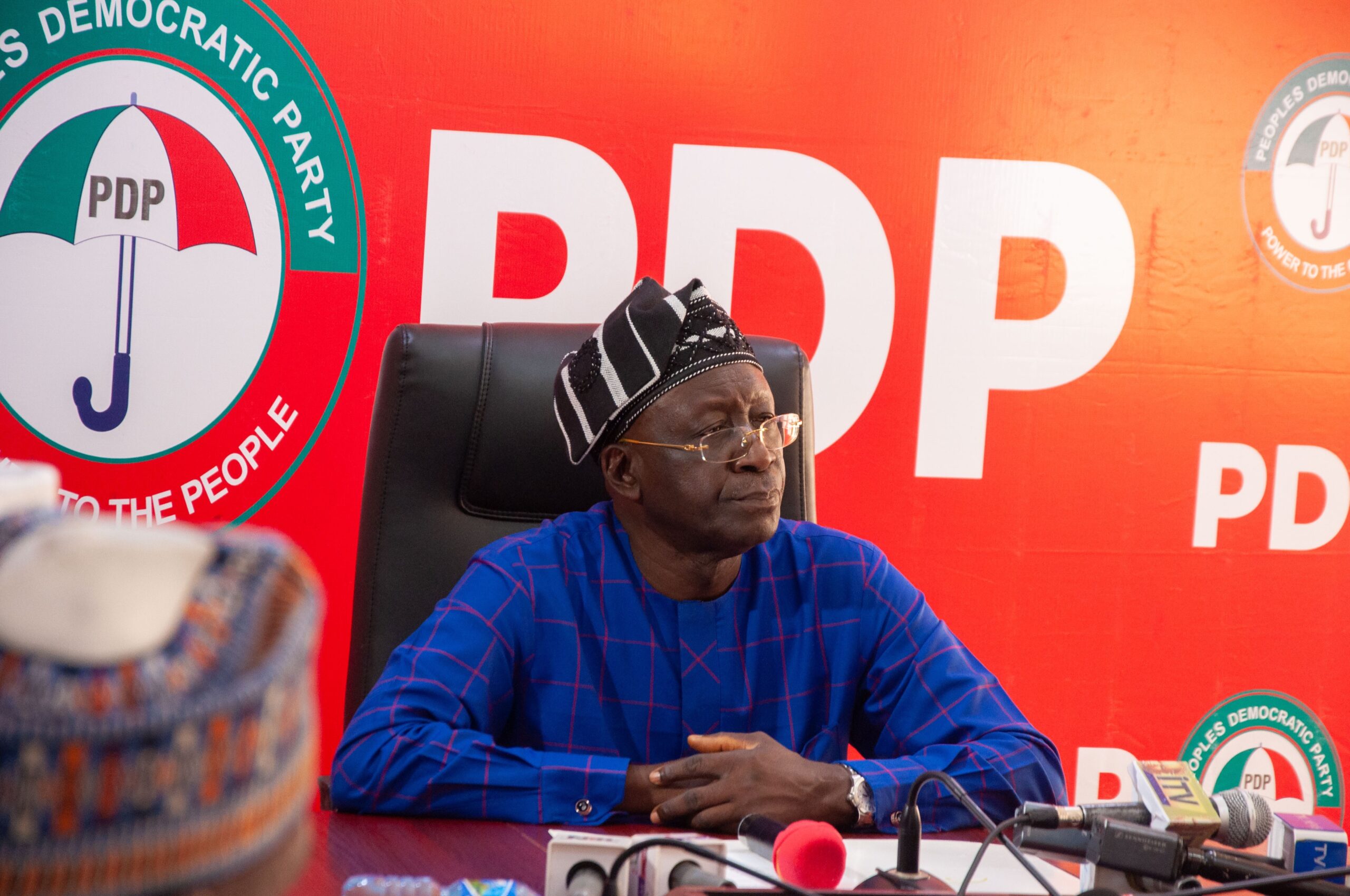 The National Chairman of the Peoples Democratic Party (PDP), Iyorchia Ayu, has found himself at the centre of the face-off between the presidential candidate of the party, Atiku Abubakar, and Rivers State Governor, Nyesom Wike, which is tearing the main opposition party apart, ahead of the 2023 general elections.

The crisis worsened on Wednesday when two associates of Mr Wike, Benue State Governor, Samuel Ortom, and a former Ekiti State governor, Ayodele Fayose, publicly expressed their reluctance to back their party’s presidential candidate for the general election.

While Mr Ortom said he was still awaiting God’s direction on his decision on the issue, Mr Fayose declared that Mr Wike would not support Atiku.

Although both men hinged their grievances on alleged unfair treatment and disrespect of Mr Wike by the presidential candidate in the process of the nomination of Atiku’s running mate, PREMIUM TIMES gathered that the main contention at this point concerns the party’s national chairman, Mr Ayu.

Mr Wike’s camp has demanded that Mr Ayu relinquish his position so that the party can elect a new chairman from the southern part of the country.

They said Mr Ayu’s removal from the party’s chairmanship is necessary to address the lopsidedness in the PDP hierarchy.

But Atiku is backing Mr Ayu to stay on, at least until after the elections next year, those familiar with the matter said.

According to a member of the camp, as the party made to elect Mr Ayu as chairman, the leaders agreed that in the event of a northern presidential candidate emerging, the former Senate President, who is from Benue State in the North Central zone, would resign and make way for a southern substitute.

Atiku’s victory at the primary had given the northern wing of the party all the top positions in the party with Mr Ayu as national chairman and Walid Jubrin as chairman of the party’s Board of Trustees. The deputy national chairman (North), Umar Damagun, being from the same region, is next in line to Mr Ayu and takes responsibility whenever the chairman is not available.

Thus, when Atiku paid a visit to Mr Wike shortly after he won the primary, the Rivers governor reminded him of the need to ask Mr Ayu to step down.

“During the visit, Wike and Atiku held a private meeting and it was Atiku who brought up the issue of his running mate,” a source in Mr Wike’s camp told PREMIUM TIMES.

“He told Wike that he had not made up his mind on the issue and he asked Wike whether he would take it or nominate a person to take the slot. Wike told Atiku that he would need to consult with his people on the offer.

“Then Wike reminded Atiku of the agreement that Ayu would resign if a northerner won the primary. Atiku said he would discuss it with Ayu but that both of them should keep the issue between them until he had persuaded the chairman to resign.

“Unfortunately, we later heard that Atiku told Ayu that Wike was demanding that he should be removed. When we heard that, we were surprised because by then, Wike had not even told us that he discussed the issue with Atiku,” the insider said.

“They are now arguing that Ayu should be allowed to stay on until after the election. They are playing games so that if Atiku loses, they will say it is unnecessary for Ayu to leave. That way the South will continue to be marginalised in the party.”

However, a source outside the camp said Mr Wike became unhappy with Mr Ayu after the party chairman visited Sokoto governor, Aminu Tambuwal, the day after the party’s national convention in Abuja.

During the visit, Mr Ayu described Mr Tambuwal as the hero of the convention for stepping down at the last moment for Atiku, a development many believed swung the contest in favour of the former vice president.

“Wike was angry with the chairman and said his statement to Tambuwal exposed his connivance in the conspiracy that denied him (Wike) and the southern region the PDP ticket. It was out of that anger that he demanded Ayu’s removal when Atiku visited him,” the source said.

Members of Mr Wike’s camp were said to be talking about their options but have not ruled out reconciliation with Atiku for the general election.

However, Mr Wike has also continued his meetings with other presidential candidates. He met separately with Labour Party’s Peter Obi and Rabiu Kwankwaso of the New Nigeria Peoples Party (NNPP) in Port Harcourt before travelling to Turkey for what his aides said was for a holiday.

In a series of tweets on Thursday, a day after Mr Ortom and former Ekiti State governor, Ayodele Fayose, indicated they might not support him at the election, Atiku insisted that the PDP remained united despite the disagreements.

“The #OfficialPDPNig will remain united. Focus on our actions. We are taking action to address the feelings of all party members. The unity in our community is my priority. Our resolve to unify Nigeria starts in our party and moves to the community, then on to society.

“Every Governor, Legislator, and other elected officials produced by our party, and party members and loyalists, are much loved and respected by me.

“When they speak, I listen. I do not only listen. Appropriate actions have been taken, are being taken, and will continue to be advanced. -AA,” he tweeted.

Also on Friday, an aide of Atiku, Segun Sowunmi, described the Rivers governor as “the Jagaban of the PDP” to underscore the high esteem in which the candidate held the governor.

Mr Sowunmi, who spoke on Arise Tv, described Mr Wike as “a man of revolution.”

“Wike is our own Jagaban; how do you explain a governor being able to keep other governors in line? One thing you can’t deny him is that he has the ability to say it as it is. He will not bend or colour things.

“Atiku holds Wike in high esteem, time and space may not bring them together, but he does. Wike is a man of revolution; he is one of the totems of PDP,” Mr Sowunmi said.

Mr Wike did not answer or return multiple calls made to him by this reporter.