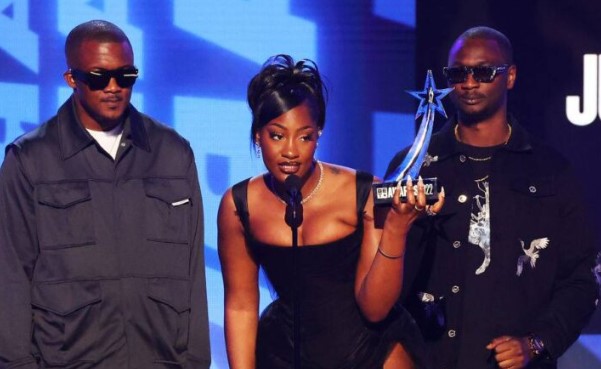 Music star, Temilade Openiyi, professionally known as Tems, has expressed her gratitude towards female forerunners in the Nigerian music industry.

She took to her Twitter page to acknowledge female Nigerian artistes that paved the way in the music industry and served as inspiration for her.

In the series of tweets, she mentioned the likes of Asa, Omawunmi, Tiwa Savage, Yemi Alade, Waje, Simi, Niniola, and others.

Tems tweeted on Tuesday, “I’m taking today to appreciate all the sisters today. Thank you for existing, thank you for deciding to get up and do something because someone saw that and became inspired by it. @Asa_official @Omawumi @TiwaSavage @yemialadee @OfficialWaje @SympLySimi @OfficialNiniola.”

She also named rising stars like herself, and promised they were all going to shake the music industry “like a Tsunami.”

“@amaarae @Gyakie_ @ayrastarr @faveszn @TeniEntertainer, when I see anyone of you gracing a stage, I feel like that’s me. We’re all winning and we’re about to move in like a Tsunami. So before it starts, know that love lives on this side, as we show the world how it’s done.

“And if I missed any messages, it is definitely unintentional. I don’t take your kind words and support for granted. I’m sending you all love today because you DESERVE it. Love always,” she wrote.

Responding to the shout-out, Omawunmi tweeted, “I’m truly humbled! Massive Congratulations. To the sky and above!”

“Tems all the way. I love you big!” Asa also replied.

“A queen I Stan,” Waje responded.

Her appreciation tweets follow her wins at the 2022 BET Awards on Sunday.

Temilade took home the award for the Best International Act, beating the likes of UK’s Dave, and her Nigerian counterpart, Fireboy DML.