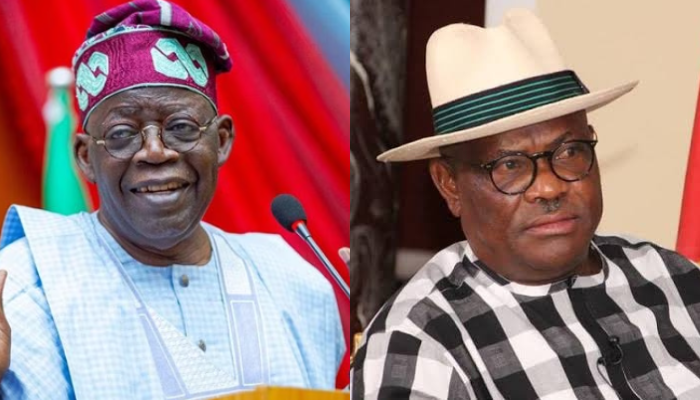 Presidential candidate of the All Progressives Congress, Bola Ahmed Tinubu, and the Governor of Rivers State, Nyesom Wike, did not meet in France.

This is coming amid reports that Wike shunned the emissaries of the Peoples Democratic Party’s candidate, Atiku Abubakar, in Turkey.

Following the division that rocked the PDP after Atiku’s emergence, there had been reports that Tinubu and Wike over issues concerning the 2023 presidential election in France.

There were also speculations that Wike and some PDP governors are aggrieved over the emergence of the party’s presidential candidate from the north.

Rahman noted that though the APC presidential candidate holds Wike in high esteem, no meeting was held between them in France.

The statement read, “We have seen a viral social media post made by one of the chieftains of All Progressives Congress in Lagos State and media reports emanating from same about a supposed meeting in France between APC Presidential Standard-bearer, Asiwaju Bola Ahmed Tinubu, and His Excellency, Governor Nyesom Wike of Rivers State,” the statement said.

“It has become imperative to set the record straight. Although Asiwaju Tinubu is presently in France, he didn’t have any meeting with Governor Wike whether in that country or anywhere whatsoever.

“This, however, does not detract from the fact that the APC presidential candidate holds Governor Wike in high esteem.

“And given the national and across-party line’s appeal of Asiwaju Tinubu’s candidature, he will not hesitate to meet any important national leader when desirable.

“As made public earlier, Asiwaju Tinubu is in France for some important engagements. He will return to the country shortly.

“We would like, once again, to advice journalists to always cross-check their information with appropriate officers before rushing to press to avoid unintended errors.”

Wike’s trip to Turkey has sparked more controversy in the party as some of the governor’s loyalists have threatened to leave the PDP.

Apart from the disagreement on North producing PDP’s next presidential candidate, there is also a crisis over the PDP vice-presidential slot.

Before the debunked report that the Rivers governor met with Tinubu, Wike’s had been seen romancing with some opposition politicians.

The governor had on June 24 hosted the presidential candidate of the New Nigeria Peoples Party, Rabiu Kwankwaso, in Port Harcourt.

The visit occurred a day after the presidential candidate of the Labour Party, Peter Obi, visited Wike, sparking speculations about their intentions and the Rivers governor’s plans.

Though Wike has refused to speak publicly since he lost the running mate slot to Governor Ifeanyi Okowa, his recent meetings with political bigwigs have strengthened speculations that he may leave the PDP.

Wike was initially spotted with Abia State governor, Okezie Ikpeazu, in Turkey. Another picture on Thursday showed the two governors and their Oyo State counterpart, Seyi Makinde, together in Turkey.

Speaking in an interview with Arise TV on Wednesday, Benue State Governor, Samuel Ortom, hinted that some governors are unhappy with Atiku.

“Atiku should go to him (Wike). Why won’t he ignore their calls? Is that not an insult? Wike is a pillar in the party.

“Currently, Nobody in the party has contributed more for the party to move forward than Wike. If Atiku was not going to honour the decision of the committee, he should have called Wike earlier and informed him. He didn’t do that. You can’t do things anyhow and expect us to be happy,” Ortom said.

But Atiku said efforts were being made to resolve the grievances of party members via his official Twitter handle, @Atiku, on Thursday.

“The Peoples Democratic Party will remain united. Focus on our actions. We are taking action to address the feelings of all party members. The unity in our community is my priority. Our resolve to unify Nigeria starts in our party and moves to the community, then on to society.

“Every governor, legislator, and other elected officials produced by our party, and party members and loyalists, are much loved and respected by me. When they speak, I listen. I do not only listen. Appropriate actions have been taken, are being taken, and will continue to be advanced,” he tweeted on Thursday.