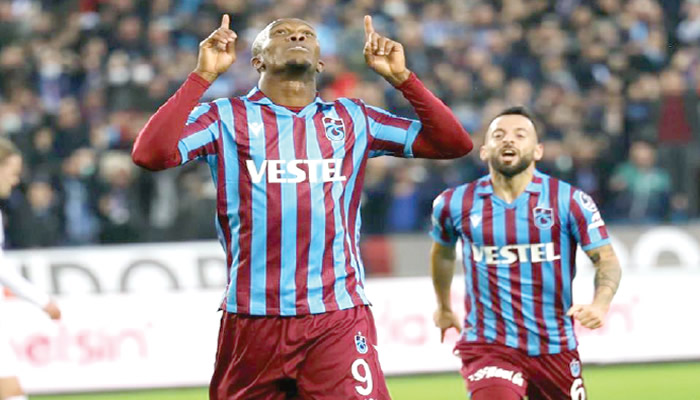 Signed by Trabzonspor to fill the void left behind by Nigeria international Anthony Nwakaeme, former Aston Villa forward Trezeguet has said he hoped he could emulate the Nigerian striker, PUNCH Sports Extra reports.

Nwakaeme became a cult hero at the club after joining in 2018 from Hapoel Be’er Sheva.

During his four-year spell with the Turkish giants, the 33-year-old made 145 appearances contributing 47 goals and 40 assists.

Prior to leading Trabzonspor to their first league title in almost four decades, the striker has been so important to the club and in a bid to appreciate his contributions to the Black Sea Storm, the Nigerian, who was only in his third season with the club, had his statue erected in the Turkish city.

The monument was erected in Trabzonspor – the city where the 32-year-old striker’s club is based.

The striker after his fourth season where he scored 13 goals and assisted another 10 refused to sign a contract extension and left the club as a free agent.

Ahead of the 2022/23 season, Trezeguet has been signed by the club to take the role of the Nigerian striker.

In an interview with Bordo-Mavi Duvar, the Egyptian extolled Nwakaeme, adding that he hope to be successful like him.

He said, “Nwakaeme is such a great player.

“I wish him good luck in the future. I hope I can be successful like him and help my team.”