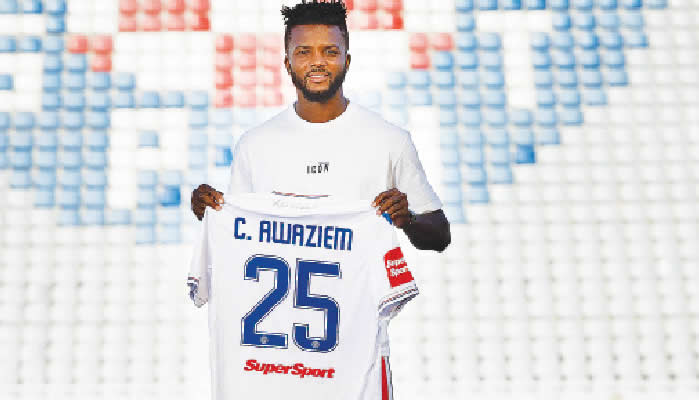 Super Eagles defender, Chidozie Awaziem, has made a sensational move to Croatian Premier League side HNK Hajduk Split on a season-long loan from Portuguese side Boavista.

Hajduk and Boavista agreed on a one-year loan for Awazim with an option to purchase at the end of the current season. Chidozie will wear jersey No.25 in Hajduk.

Awaziem started his football career with El-Kanemi, and in 2014 he moved to Porto’s football academy. At the beginning of his senior career, he made over 60 appearances for Porto’s B team, and he also made 10 appearances for the first team.

From 2017 to 2021, Awaziem was on loan at French side Nantes, Turkey’s Rizespor, and Spanish Segunda Liga club Leganes, before finally joining Boavista in 2021, after a loan spell at the Portuguese side the previous season.

He spent the past season on loan in Turkish Alanyaspor. He played regularly in all clubs, and during the period he made over 20 appearances for the national team.

In total, he has played over 200 senior matches in his career so far.

“Chidozie is a player with very good technical and tactical skills and excellent physical characteristics. With his qualities, he will certainly contribute to the quality of our defence, and he will bring a new dimension to the team. It absolutely fits into our style and model of our game,” HNK Hajduk Split sports director, Mindaugas Nikolicius, said.

Speaking shortly after his unveiling, the Super Eagles defender expressed delight at joining the Croatian club side.

“I know that Split is a beautiful city and that the fans are very passionate and love football. I also like football, so we are very similar in that. I came to Split to give my best and to fulfill our goals,” Awaziem said.