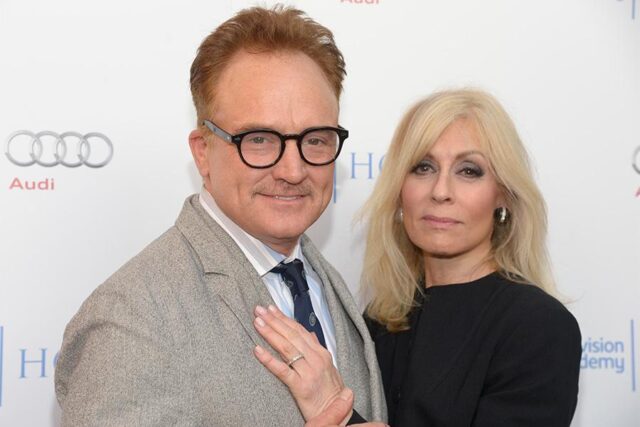 Bradley Whitford (born October 10, 1959) is a celebrated and legendary actor and producer from the United States. He is best known for his role as White House Deputy Chief of Staff named Josh Lyman in the NBC political drama titled The West Wing.

Bradley Whitford portrayed Danny Tripp in Studio 60 on the Sunset Strip, Dan Stark in Fox’s cop buddy comedy The Good Guys, Timothy Carter in CBS’s The Mentalist, and antagonist Eric Gordon in Billy Madison. He acts as Arthur Parsons in The Post, Dean Armitage in Getting Out, Roger Peralta in Brooklyn Nine-Nine, and Rick Stanton in Godzilla: King of the Monsters.

Bradley Whitford was born in Madison, Wisconsin, United States. He was born to Genevieve Louie Whitford and George Van Norman Whitford on October 10, 1959. Between the ages of three and fourteen, he lived in Wayne, Pennsylvania.

His mother, a poet, later resided in the Philadelphia area of Chestnut Hill. He has a brother named David Whitford. He grew up in a Quaker household. He graduated from Madison East High School in 1977.

Bradley Whitford graduated with a Bachelor of Arts in 1981 from Wesleyan University, where he was a roommate of producer Paul Schiff. He became a part of “Group 14” at the Juilliard School of Drama.

Bradley Whitford married actress Jane Kaczmarek in August 1992, and the union is blessed with three lovely and hardworking kids.

The couple announced their divorce in June 2009, after 16 years of marriage, and the divorce was formalized in October 2010.

Bradley Whitford was named the 2007 Champion of Justice by Alliance for Justice, a nonprofit organization, in May 2007. In June 2007, he delivered the keynote address at Princeton University‘s Class Day. He has also served on the Board of Trustees at his alma mater, called Wesleyan University, since 2012.

He first appeared on television in 1985 in an episode of The Equalizer, followed by a two-year recurring role on ABC’s All My Children.

Bradley Whitford made his film debut in Dead as a Doorman in 1986. In 1990, he made his Broadway debut as Lt. Jack Ross in Aaron Sorkin‘s play A Few Good Men. He and Aaron Sorkin would later work together on several projects. He also made a guest appearance on ER in the episode Love’s Labor Lost.

He starred as Pete Harrison in the ABC comedy series titled Trophy Wife in 2013, but the show was canceled after the first season.

Bradley Whitford had a recurring role as a transgender businessman in the first season of the Amazon series titled Transparent in 2014. His performance earned him a Primetime Emmy Award for Outstanding Guest Actor in a Comedy Series. He reappeared as Magnus Hirschfeld in the second season of the show.

Bradley Whitford is one of the respected actors who has a net worth of US$10 million as an actor and producer.