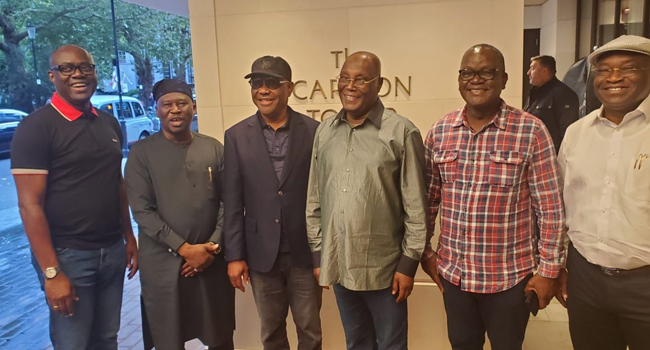 Details have emerged from the meeting on Thursday between the presidential candidate of the Peoples Democratic Party (PDP), Atiku Abubakar, and the camp of the Rivers State Governor, Nyesom Wike, over the crisis in the main opposition party.

The meeting was held over dinner in London at the Park Lane Carlton Hotel. Those from Mr Wike’s side at the meeting included Governors Seyi Makinde of Oyo State, Samuel Ortom of Benue State and Okezie Ikpeazu of Abia State. Governor Ahmadu Fintiri accompanied the candidate.

PREMIUM TIMES sources at the meeting with Atiku said the Wike camp told Atiku that it would only negotiate with him for its support if the National Chairman of the party, Iyorchia Ayu, steps down and is replaced by a candidate from a southern zone of the country.

Speaking on behalf of the group, one of the governors said the condition was to ensure that the party corrects the lopsidedness in its leadership before the campaigns begin and that it was in line with a pledge Mr Ayu made before he was elected by consensus at the party’s national convention last year.

The governor also accused Mr Ayu of polarising the PDP. He said contrary to the description of Mr Ayu by Atiku as the unifier of the PDP, the former Senate President is allegedly the most divisive figure to have occupied the party’s top office.

He said rather than seeking reconciliation of many aggrieved members of the party across the country, Mr Ayu had allegedly created new divisions with his aloofness and divisive leadership.

The group said Atiku needs to correct the imbalance in the PDP to demonstrate his willingness and capacity to unite Nigeria if he becomes president.

In his response to the remarks, our source said Atiku acknowledged that the party’s leadership is lopsided but said the provisions of its constitution mean that the anomaly could not be corrected through the resignation of the National Chairman.

But the Wike camp interjected to recall that a former national chairman, Okwesilieze Nwodo, had resigned from the position in 2011 following the election of President Goodluck Jonathan and the Deputy National Chairman from his region was overlooked in filling the vacancy.

After much back and forth, Atiku reportedly said he would consult and revert to the group.

According to our source, the meeting did not discuss the grievances peculiar to Mr Wike and other members of his group, insisting that the resignation of Mr Ayu was their condition for opening negotiation with Atiku.

Our source denied reports that Atiku had made some concessions to the group, stressing that the only issue discussed at the meeting was the condition that the group gave for any negotiations with Atiku.

The PDP has been rocked by the face-off between Atiku and Mr Wike over the outcome of the party’s presidential primaries and Atiku’s nomination of Delta State Governor Ifeanyi Okowa as his running mate.

Mr Wike had accused Mr Ayu of manipulating the process to help Atiku beat him and was further infuriated after Atiku overlooked him in his choice of his running mate.

The two leaders had held two previous meetings and had also agreed to constitute a reconciliation committee to look at the issues in their quarrel, but those efforts did not yield fruits.

It is believed that the conflict has held back Atiku from constituting his campaign council, as he wants to unite the party towards the general election and assign Mr Wike a major role in his electioneering.