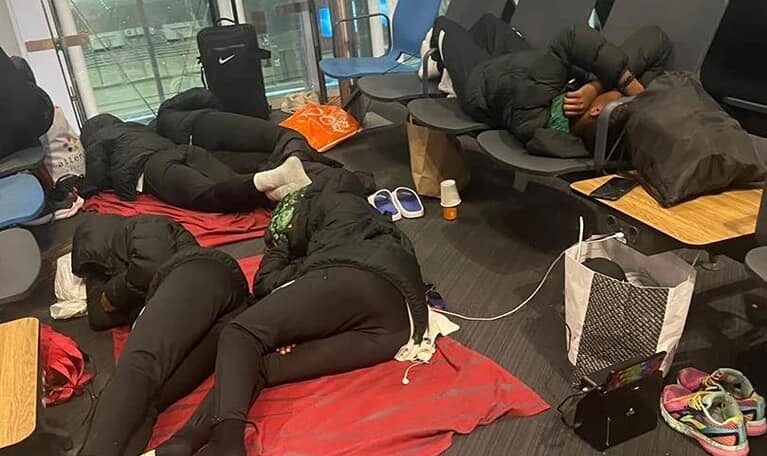 After being eliminated from the FIFA U-20 Women’s World Cup, Nigeria’s U-20 Women’s team, the Falconets, have been sentenced to a torturous journey back to the country from Costa Rica.

After showing much promise winning all three group games against France, South Korea and Canada, the Falconets fell short in the quarter-final as they lost 2-0 to the Netherlands in a match that ended early Monday morning.

PREMIUM TIMES gathered the Falconets had to depart Costa Rica almost immediately after their elimination at about 6.30 am Monday.

However, after more than 48 hours on a journey that should have been completed in a day or less than two days, the Falconets are still thousands of miles away from home.

According to Colin Udoh, a former Super Eagles media officer and committee member with the Nigeria Football Federation, the Falconets have been going through hell in their bid to represent their fatherland, despite their valiant performance on the pitch.

On a Twitter thread that has since gone viral, Mr Udoh revealed Tuesday morning how the Falconets were stranded in Turkey, at the Istanbul airport on a 24-hour layover. He showed photos of the national team players sleeping on airport benches and on the floor of the biting cold airport.

He said that was just the latest in a litany of troubles the team has faced while competing at the tournament.

“We’ve been on a trip to Nigeria since 6:30 am Monday. We are currently sleeping at the Istanbul Airport awaiting a 6 pm Wednesday flight, Istanbul time to Abuja,” a player source was quoted as saying in Mr Udoh’s Twitter thread.

“The thread continued: According to team officials, their tickets were booked for Tuesday evening on Avianca.

“But the Colombian flag carrier re-booked the team on Turkish Air, leading to a four-hour delay in Colombia. That, coupled with a stop in Panama, meant the team missed their Tuesday connection flight.

“NFF’s Leader of Delegation Ruth David tried in vain to ask the airline for accommodation, but without transit visas, the pleas accomplished nothing and that forced the team to spend 24 hours at the airport awaiting their connecting flight to Abuja.”

There is hope for the Falconets to get to Nigeria about midnight or thereabout.

The Nigeria Football Federation, who in partnership with Air Peace, ensures the Super Eagles use chartered flights whenever they are playing, has since released a statement suggesting they were not to blame for the Falconets’ avoidable predicaments.

The NFF explained that several factors, including the inability to secure transit visas for players and officials of the U20 Girls National Team, Falconets, at the Istanbul Airport, led to the team having to stay 24 hours at the airport in Turkey on their way from the FIFA U20 Women’s World Cup.

“The NFF did not book the team’s tickets from Costa Rica; FIFA did. FIFA also did not envisage the hitches that saw the team delayed for more than three hours in Bogota, and another one hour in Panama. By the time the team got to Istanbul, the flight to Abuja had left.

“Our officials pleaded for compassionate transit visas so as to take the players and officials to a hotel inside the town, but this was not possible as they were informed that Nigeria had been removed from the list of countries whose citizens were issued visa-on-arrival in Turkey. The airline then took the team to a sleeping area at the airport and gave them tickets to have meals every five hours. This situation has nothing to do with NFF, who had made arrangements to receive the team in Abuja before the complications in travel arrangements,” NFF General Secretary, Mohammed Sanusi, explained.

The NFF had pleaded with FIFA to intervene with the German Embassy to issue the team transit visas before their departure from Nigeria, in order for the team to be able to travel through Germany. This did not happen.

On the issue of body wear, Mr Sanusi said: “The players were handed three sets of green jerseys and two sets of white jerseys, several house-wear types and training jerseys. The players opted to wash only their jersey top (no other stuff) because when the first set of body-wear was sent to the laundry people at the hotel, it returned with some FIFA and NFF badges at the front and names at the back peeled by the machine.”