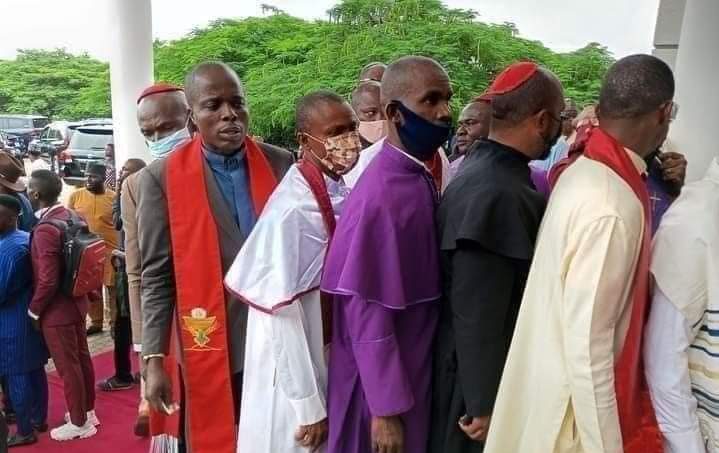 The alleged ‘fake’ clerics whose presence took the shine at the unveiling of the Vice Presidential Candidate, Senator Kashim Shettima, on Monday, presented proof of their ministries and ordination certificates.

This is even as the clergymen cleared the air about their mission at the Shehu Musa Yar’Adua Centre, the venue of Shettima’s presentation, saying they were neither sponsored by the ruling party nor the APC Presidential Candidate, Asiwaju Bola Tinubu.

Journalists assigned to cover Shettima’s unveiling as the running mate of the presidential flagbearer of the APC, Asiwaju Bola Tinubu, had watched in amusement after the clerics showed up at the venue.

The presence of the clergymen and women had been greeted by public outcry after their viral photos and videos from the event surfaced on the Internet, with some people deriding them as either mechanics or yam sellers, an allegation that the Tinubu Campaign Organisation has denied.

Earlier, the media had been awash with reports from religious bodies urging Christian leaders to boycott the unveiling to drive home the point of their grievances.

The outrage that trailed their controversial appearance forced the Christians Association of Nigeria and Arewa Christians and Indigenous Pastors Association to issue separate statements dissociating the bodies from the pastors and bishops.

While CAN reiterated that it did not send any representative to Shettima’s unveiling, Arewa pastors announced that none of the clerics belongs to the North (Arewa), or is in registered Church as a Bishop in the hierarchy or order of Ecclesiastical or Apostolic ranking.

But the accused clergymen maintained that they were no mechanics, yam sellers, or fake preachers as being portrayed on social media.

In a Monday press conference in Abuja, the clerics presented certificates and documents that they described as proofs of their ordinations and churches.

While justifying the authenticity of churches, they identified them as Christian Revival Evangelical Mission Worldwide, owned by Apostle Godwin Livinus, Divine Prophetic End Time Gospel Faith in Kubwa, a shepherd by Bishop Dr. Emeka Theodore, and the Light House of all Nation Ministry, which has Bishop Emmanuel Sunday Jayeola as General Overseer among others.

The Christian leaders who gathered at the venue under the aegis of the Muslim-Christian Love Foundation stated they were at Shettima’s presentation to show solidarity.

Secretary of the group, Adams Abel King, who read the statement on behalf of others, disclosed that it was unfortunate they were portrayed as emissaries of CAN.

They dismissed claims of being sponsored to impersonate leaders of the Christian Association of Nigeria at the event.

He said, “We never claimed to represent CAN or portray ourselves as their emissaries.”

According to King, they only showed at the event to identify with Shettima, who he claimed transformed Borno state and protected the residents, regardless of religion or bias. At the same time, he was the governor of the state.

“Although Senator Kashim Shettima took the mantle of the state at a difficult time marked by terror attacks and deadly insurgency, his mature, cautious, and decisive management of the state’s affairs helped preserved the social fabric that held several communities together and reassured members of the Christian faith that the government remained committed to their freedoms and wellbeing.”

“His (Shettima) rebuilding efforts targeted at the Christian community, including the reconstruction of churches affected by terrorist activities,” he said.

The emotional clerics condemned the harassment and near-assault they endured over their participation at the event, particularly on social media where mob antics, driven by ignorance and malice, have strained social ties and caused divisiveness.”