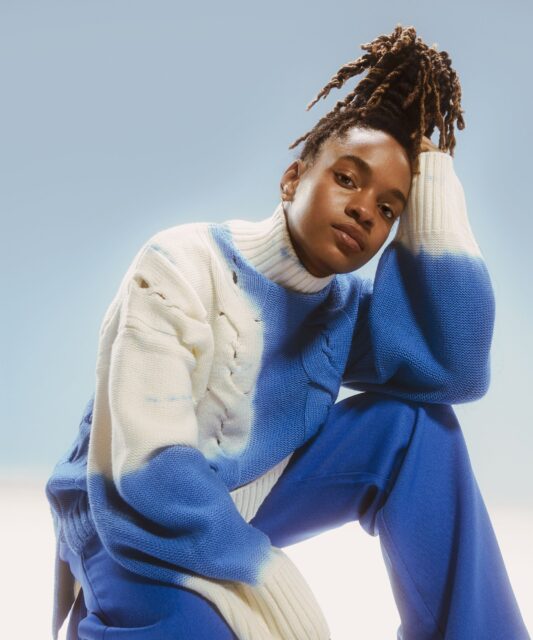 Mikayla Victoria Simpson (born February 16, 2000) is a multi-proficient Jamaican reggae singer, songwriter, and rapper. The music act, who is professionally known as Koffee, is also a deejay and guitarist.

She released her debut single, Burning, in 2017 and dropped her debut project, an EP titled Rapture, in 2019.

Rapture went on to win the Best Reggae Album at the 62nd Grammy Awards. Her debut album, Gifted, was released in March 2022.

Koffee was born on the 16th of February 2000 in Spanish Town, Jamaica. Her birth was registered with the name Mikayla Victoria Simpson. Her mother’s name is Jo-Anne Williams.

Koffee‘s initial musical influence can be traced to her mother’s religious background. Jo-Anne Williams is a Christian and attends the Seventh-Day Adventist Church. Jo-Anne Williams works with the Ministry Of Health and as an occasional actress.

Koffee began singing when she joined her local church’s choir. By the age of twelve, she taught herself how to play the guitar. The guitar which she used to practice had been borrowed from a friend. She also began composing music lyrics and gained inspiration from listening to reggae singer, Protoje.

Koffee completed her elementary education at a renowned school in Kingston.

She is an alumnus of Ardenne High School at St. Andrews, Kingston. She underwent her first to the sixth form at the institution.

Koffee‘s music talent gained popularity after she uploaded a video of her singing on Instagram. In 2017, she composed and released her first single titled Legend. The song was created with only her voice and the acoustic guitar playing. Legend was a tribute to Jamaican sprint superstar Usain Bolt. The song increased her popularity across the world because Usain Bolt reposted it on his Instagram page, making the song go more viral.

That same year Koffee released her debut single, Burning, which was inspired by her desire to keep pushing on despite her initial disappointment in not getting into post-secondary sixth form after passing out of high school. Burning was a hit across the world; it spent three weeks at the number one spot on The Foundation Radio Network’s Top 30 Reggae Chart.

In December 2018, Koffee dropped, Raggamuffin, a song that spoke against gun violence and the government’s neglect of the youths. In 2019, she made it to BBC Radio 1Xtra’s “Hot For 2019” artists list. She soon dropped the Major Lazer-produced single, Toast.

Koffee had signed a record deal with Columbia Records UK in 2018. Her first project with the label is an EP titled Rapture, and it was released on the 14th of March 2019. The music video of Throne, one of the singles on the project, was shot in Spanish Town and gave viewers a tour of her hometown. The music video debuted on The Fader on the 22nd of January 2022.

She released her first cross-over collaborative single, W, in 2019. The song featured vocals from Hip Hop artist Gunna. Also, in 2019, Tory Lonez did a remix of Koffee‘s song, Toast, as a part of his International Fargo Project.

Koffee‘s EP, Koffee, won the Best Reggae Album at the 62nd Annual Grammy Awards. She was 19 years old when she won the award and is the youngest person and only woman to be awarded in the category. In 2020, she dropped two hit songs, Lockdown and Pressure. She was featured on John Legend‘s single, Don’t Walk Away.

She dropped her highly-anticipated debut album, Gifted, on the 25th of March 2022. The album has received positive reviews so far. The singles on Gifted speak about perseverance and overcoming struggles. The 10-track project is a fusion of dancehall reggae, fusion reggae, pop, and R&B.

Gifted is a great work of art as Koffee, and other leading musicians created it. Artists like Kendrick Lamar, Lionel Richie, and Ryan Bailey have songwriting credits on the project.

Koffee is an international music superstar with millions of fans worldwide.

Koffee is 20 years, clocking that milestone on February 16. She resides in Kingston, Jamaica. She often travels to Europe and North America to perform at sold-out shows and concerts.

Koffee‘s music prowess was first tested when she competed and won her high school’s talent show in 2016. She had performed before an audience of over 1,000 in her school’s cafeteria. Unknown to her, the event was an audition. The show gave her the confidence to perform live in front of a large audience.

Koffee is a beautiful young woman with a dark skin complexion and slender frame.

The five feet tall music superstar Koffee is currently single and is more focused on her career at the moment. She is not married and has no boyfriend.

Koffee has built a small fortune from her successful music career. She has made a lot of money since she came to the limelight.

Koffee‘s net worth is estimated to be US$5 million.