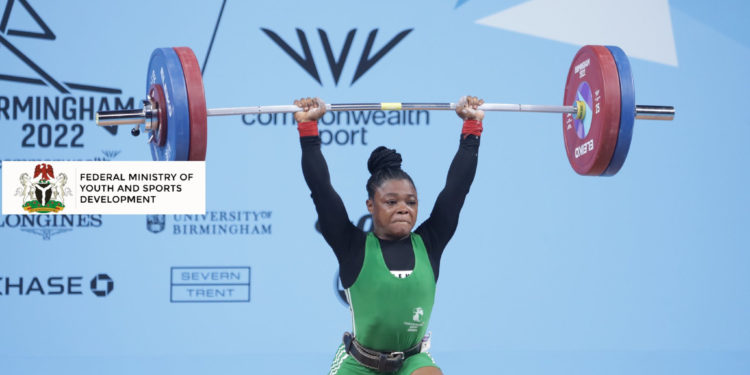 Lawal, in the process, set three Commonwealth Games records in the women’s 59kg final, lifting 90kg in snatch, 116kg in clean and jerk, and 206kg in total.

Jessica Brown of England emerged second in the event with 197kg in total to win the silver medal, while Canada’s Tali Darsigny won the bronze medal with a 196kg lift.

The News Agency of Nigeria (NAN) reports that Team Nigeria has now won two gold and one bronze medal and are currently placed ninth on the medals table.

Vice Chancellor of the University of Calabar, Florence Obi, has lauded Nigeria’s weightlifter, Adijat Olarinoye, for winning the first gold medal of the 2022 Commonwealth Games in Birmingham.

Ms Obi, who spoke in a telephone interview with the News Agency of Nigeria (NAN) on Sunday in Calabar, said the female athletes were making the country proud.

Olarinoye recorded a total of 203kg in the women’s 55kg weightlifting event. The 203kg lift is a new Commonwealth Games record.

The VC said that Olarinoye’s feat in Birmingham was coming at a time when millions of Nigerians were still celebrating the victory of Oluwatobiloba Amusan.

Amusan made history by becoming the first Nigerian to win the World Athletics Championship gold medal in the 100m women’s hurdle and also setting a new world record in the process.

She said that the strong determination and the winning spirit of the medalists would continue to fly the nation’s flag on the international stage.

Ms Obi lauded Olarinoye for displaying courage, integrity, and good sportsmanship on the world stage, adding that with hard work and determination, success was achievable.