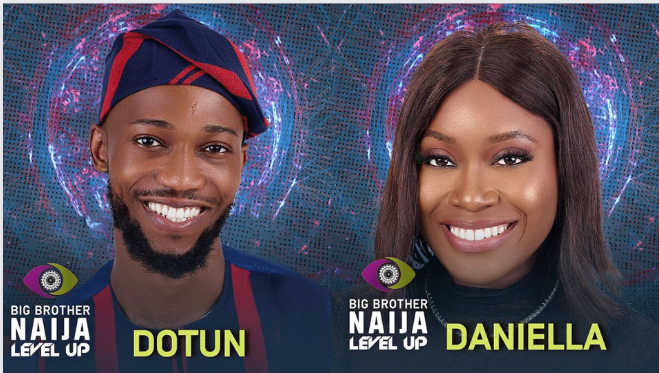 This was announced after the Big Brother Naija Level Up housemates had their Head of House games on Monday evening.

Following his emergence at the games, Big Brother asked Dotun to pick a deputy and he chose Daniella.

As a result, Daniella will be Dotun’s companion in the exclusive HOH lounge.

Following his post, Dotun automatically gained immunity for the week and therefore, cannot be nominated for possible eviction this week.

However, the same privilege was not extended to Daniella.

Sheggz and Allysyn are the two tails of the house this week. The other housemates have been instructed to use the materials in a special box to dress them daily, as their punishment.

After the first round, Phyna, Chichi, and Dotun, were qualified for the second round.

Dotun became lucky during the round and emerged as the HOH for the sixth week.

With his win, Dotun will enjoy the HOH lounge with Daniella, whom he picked as his deputy.

So far, Chomzy has been the only female housemate to enjoy the position.