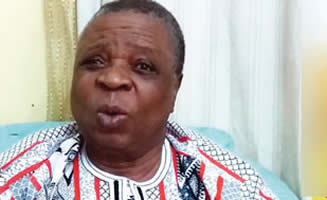 A former Minister of Transport and member, Board of Trustees of the Peoples Democratic Party, Chief Ebenezer Babatope, has urged the Rivers State Governor, Nyeson Wike, to stop making outrageous demands from the party.

Babatope said the demands allegedly made by Wike that the presidential candidate of the PDP, Alhaji Atiku Abubakar, should do only one term in office if he wins was not right.

In an interview with one of our correspondents in Ibadan on Friday, Babatope said politicians could meet anywhere and they could do whatever pleased them.

He, however, appealed to them not to jeopardise the party’s chances of victory in 2023.

He added, “God will judge them if they do anything to trample upon the victory which God Almighty has already given the PDP in the next year election. We must all work to keep the victory of the party. On the demand that Atiku should spend one term, who knows who will be alive tomorrow?

“Nobody knows who will be alive tomorrow morning. Why is he (allegedly) saying Atiku should spend only one term? The power to determine who will be alive or not belongs to God Almighty alone. It lies with God almighty, the maker of mankind. So, nobody should seek to play God.

“I want to appeal to Wike; he should kindly stop all these things and settle down to ensure that there is peace within the party.”

Meanwhile, another member of the BoT and former deputy national chairman of the party, Chief Bode George, has again asked the APC National Chairman, Senator Iyorchia Ayu, to resign.

He said having been in the party for 23 years, he could tell that Ayu’s continued stay in office might lead to the party’s defeat in the February 25, 2023 polls.