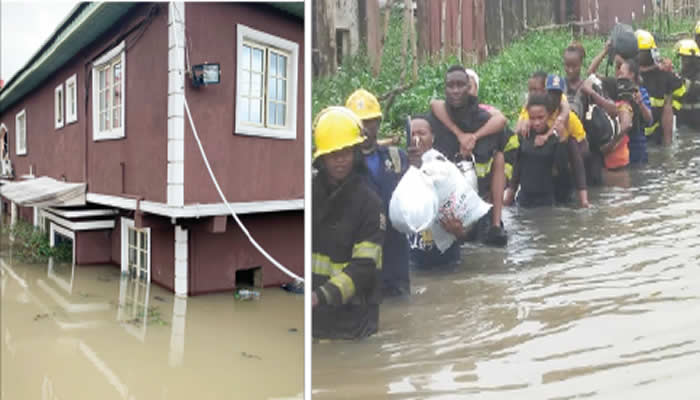 Two persons lost their lives during the flood that submerged various communities in Alimosho Local Government Area of Lagos State on Monday.

The Lagos Territorial Coordinator, National Emergency Management Agency, Ibrahim Farinloye, in a statement, said the flood caused by the torrential rainfall, swept the victims away in the Iyana Ipaja and Command areas of the state.

He said one of the victims, identified simply as Alfa, had escaped with his wife and four children, adding that he returned to his house to pick some items when the flood that submerged his house swept him away.

Farinloye said, “Two adult men were swept away at Iyana Ipaja and Command areas of Lagos State. A man simply known as Alfa was swept away as a result of heavy downpour that caused flooding that took over the whole communities of Ajayi Street, Olubodun Ifesowapo, Olubodun, Fafunwa, Ipaja West, and Tioluwani, in Alimosho LGA.

“The deceased was said to have initially escaped with his wife and four children but the man was said to have returned to his house to pick some items in the course of which he was swept off.

However, two other persons with him escaped with the help of the community members.

He said, “The family of Alfa had been evacuated to a relative’s residence. While another adult man, who was said to have missed his steps on the Command Bridge, fell into the running water. But before help could reach him, he had been carried away.”

In another development, nine ladies were rescued when a one-storey building that was submerged started sinking on Akinwunmi Street, Mende, in the Maryland area of the state.

During a visit to the area, our correspondent observed that other buildings close to the building were also affected as landlords and residents in the affected houses were displaced.

It was also observed that the issue of flooding had been a reoccurring problem affecting residents in the community.

Speaking with our correspondent, a lady identified simply as Blessing, said she raised the alarm over the incident, adding that she took a video recording of the situation and sent it to her company, prompting her company’s safety manager to alert emergency responders.

Blessing said, “I forwarded a video to my office group telling them that the flood occurrence is the reason I could not come to work, because there was no place to pass. My office representative asked if I had been able to come out of the building, and I said no. So, the safety manager of my office alerted rescue agents to come down to Mende and we were rescued.

“However, we always have the area flooded once there is a heavy downpour. Around 6.00am, we heard a collapse, which happened to be the fence demarcating our building and an abandoned building.

“I initially thought it was thunder and lightning, it was when my neighbours started knocking on the door that I knew it was the fence of our building that collapsed. We were all standing on the staircase of the building when the rescue team swam from the outside to start taking us out.”

Also speaking to our correspondent, a sister of one of the rescued victims, Tosin Ademuyiwa, said this was not the first time that such an incident would happen in the community.

She said, “Immediately the fence fell, the flooded water from the adjoining abandoned building entered our premises. We never expected the rescue team agents; we were only expecting a few guys to help us out of the building.

“The NEMAN officials backed two teenagers, Mohammed Amina, and the younger sister of Blessing, to safety. They were carried because they were scared of putting their legs in the flood, and we the adults were held by the hands, as we came out of the waterlogged area.”

The landlord of the building, Daniel Okereke, while refuting the claim that his building sunk, said this was the first time the flood happened in such magnitude in the community.

Okereke said, “This is not a normal occurrence, as this is the first time it is happening in this magnitude. Since I moved in here in 2008, it has never been like this. We were all shocked because I have never left my house from the balcony; my pregnant wife and I had to leave my house from the balcony with the use of a ladder because of how bad it was.”

Another landlord in the area, Sylvester Diugwu, said the flooding was caused because the canal had been blocked.

He said, “We have written to the government as regards the blockage of canal. As you see that bamboo tree, it grew inside that canal and blocked that place. Anytime there is rain blocking the area, there is no channel to locate the lagoon, so the whole rain comes onto the street.”

The spokesperson for the Mende Community, Olumide Ogunbowale, said, “Those people were not trapped because this is not the first time, it is just like normal Lagos natural disasters, which rescinds after the flooding.”

Reacting to the flooding in Mende, Farinloye said, “NEMA received a distressed alert on a sinking storey building where nine people are said to be trapped.

“The torrential rainfall, which lasted for about four hours in the early hours of the day, flooded lots of communities in Lagos State. The NEMA advance team upon close observations called for more reinforcement of personnel.

“The landlord of the building had used a ladder to escape, but NEMA questioned him for failure to contact emergency responders, but someone from one of the trapped victim’s offices contacted NEMA.

“The agencies on the ground now are LASEMA, Lagos State Fire and Rescue Service, and Police Disaster Management Unit. The rescue activities have commenced, and all the nine trapped ladies have been successfully rescued.”