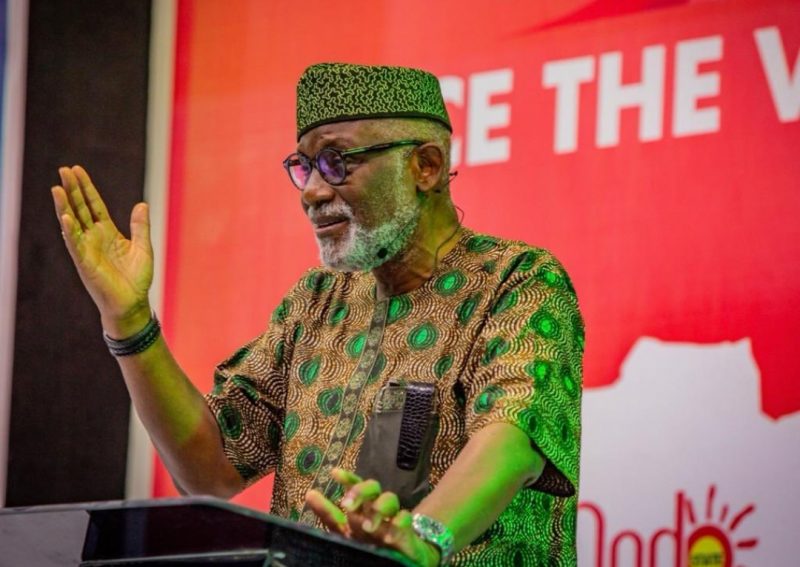 Governor Rotimi Akeredolu of Ondo State has said that the north cannot retain power after producing the president who has spent eight years in office.

Mr Akeredolu, who spoke on Sunday at the 40th Holy Ghost Convention Dinner of The Sword of the Spirit Ministries held at the International Conference Centre, University of Ibadan, Oyo State, said voting for a northern candidate would be a misnomer in the present political situation in the country.

He urged Christians not to undermine the struggle to return power to the south due to the choice of his party to field a Muslim/Muslim ticket in the coming presidential election.

Mr Akeredolu has been at the forefront of the struggle for power shift from the North to the South before the presidential primary of the All Progressives Congress.

While the APC’s presidential candidate, Bola Tinubu, is from the South-west the candidate of the main opposition party, Atiku Abubakar, is from the North-east

Mr Akeredolu, who is also the Chairman of the Southern Governors’ Forum, advised that the struggle for the President of Nigeria to come from the Southern part of the country in 2023 should not be in vain.

He had led his colleagues in the Southern Governors’ Forum to demand a Southern Presidency despite stiff opposition from some quarters.

He called on the people not to throw away the chances of producing the next President, particularly from the Southwest where Bola Tinubu hails from.

He described Mr Tinubu as the best choice, adding that he has the experience and courage to tackle the challenges facing the country.

On the Muslim/Muslim ticket, the governor pleaded with Christians to look beyond religion and focus on the competency of the presidential candidate.

While stressing that the buck stops on the president’s table, the governor added that what is important is to have a southern president in 2023.

“The north cannot produce a president for eight years and still want to retain it for another eight years. It is not going to work.

“Luckily, it did not only come to the south, but it also came to the South West. Now, where do we stand? I understand our feelings because I’m one of you. I am a Christian. All of us here are worried. What will be our gain, and that, why is my party, the APC throwing up a Muslim/Muslim ticket?”

Mr Akeredolu said the APC’s Muslim/Muslim ticket has been an issue for members of the party, including himself.

“We have debated it, fought it and we have done so many things on it. I have always said to people, my fight was for Southern President,” he said.

“We call it a matter of coincidence. It is a matter of conscience. All of us are here, why don’t we look at it from one angle. The buck stops on the table of the President. Do we have a capable hand who can manage the affairs if given the opportunity? Do you have a man who is bold enough to challenge incursion into our land? That is it.

Earlier, the Founder, The Sword of the Spirit Ministries, who is also the President, Pentecostal Fellowship of Nigeria (PFN), Francis Oke, appreciated God for His good works and the journey so far.