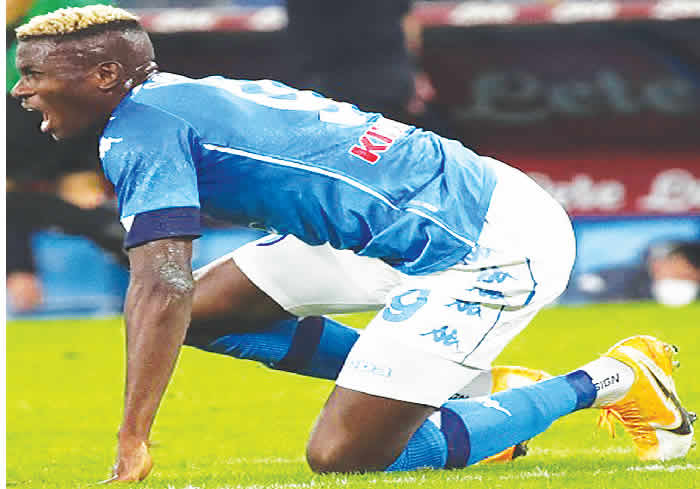 The Nigeria international trained separately from the rest of the team on Monday morning due to a muscle issue and it poses a source of concern for Napoli, who open their Champions League group stage games against last season’s beaten finalists.

The Azzurri trained at Castel Volturno on Monday morning following their 2-1 win over Maurizio Sarri’s Lazio on Saturday.

Napoli are currently top of the Serie A table along with Milan, but could see their star striker Osimhen not only miss the upcoming European clash, but also Saturday’s Serie A fixture against Spezia.

“Osimhen trained separately from the team due to a muscle problem suffered in the final minutes of Lazio-Napoli,” the Partenopei said in an official statement as reported by Football Italia.

Hirving Lozano also trained separately from the group after undergoing further examination that ruled out facial fractures for the Mexico international. Lozano had been stretched off during Saturday’s match at the Stadio Olimpico. Diego Demme is also not available and trained in the gym today (Monday),” Napoli stated.

Osimhen, 23, could be a big loss against Liverpool as Napoli would take advantage of his pace against the English side’s high defensive line.

Osimhen has scored two goals in the opening five Serie A games of the season.