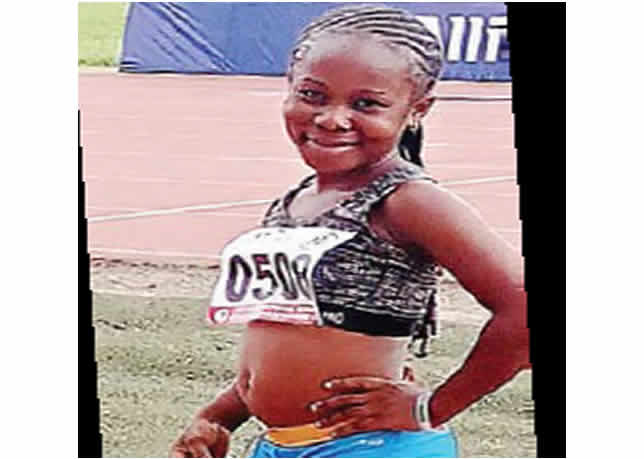 Amusan famously won two gold medals at the just-concluded Commonwealth Games in Birmingham after her historic feat at the 2022 World Championships in Oregon, US after she broke the women’s 100m hurdles record with a stunning semi-final time of 12.12secs to erase Kendra Harrison’s 2016 effort by 0.08secs.

The 25-year-old powered Nigeria’s 4x100m women’s team to gold in Birmingham, as Nigeria claimed a first-ever Commonwealth Games title in the event. She also won the 100m hurdles gold clocking a blistering 12.30secs to smash the Games’ record.

Emiabata set the International School Athletics Championship alight when she won the 50m race for the U-8 category at the Teslim Balogun Stadium in Surulere, Lagos in March.

This was just a year after she started training at Dipo Dina stadium in Ijebu, coincidentally the ground where Amusan began her journey to stardom.

She also won two U-8 races at the Dipo Dina stadium in August – a feat she believes will spur her to attaining Amusan’s feat in the nearest future.

“I’m going to go onto the track and try my best – hopefully it will be enough for me to reach the level of my role model (Tobi Amusan),” she told PUNCH Sports Extra.

On why she opted to become a sprinter, Emiabata said she took after he mother, Bukola Jasper, a quarter miler.

Jasper represented Nigeria at the 2019 African Games in Congo Brazzaville and won gold in the 4x100m event.

“My mother was the first person that inspired me into athletics,” Emiabata continued. I never liked any other sports because it is too rough for me.

“She used to take me to her training session and I fell in love with the way she used to run then. It was at the stadium there that I met Tobi Amusan who bought me some kits to encourage me.”

Asked if she ever watched Amusan race, the primary three student of The British Afrique international school, Ijebu Ode revealed that she stayed up with her mother to witness the historic moment.

“My mother allowed me stay up to watch auntie Tobi run on her phone and I was happy she won her races,” she continued.

“She is an inspiration to me and I want to be like her.”

The organiser, an Olympian, Enefiok Udo-Obong, also said of Emiabata, “She is an emerging talent but let us not put pressure on her. The International School Athletics Championship which was held in March was to help expose them.

“We decided to start from school sport so that we can get the raw talent to compete at the higher level, competitive level.

“Talent is best developed at young age. Emiabata is a good talent and this championship has further exposed her which will hand her an edge over their counterparts.

Emiabata’s coach, Dayo Johnson, doesn’t dispute her talent, but he thinks she has the tools to develop into a world-class sprinter as she grows.

“She’s far superior than any young girl I have seen compete in recent times,” Johnson said.

“When you look at her, she’s very efficient in terms of running technique at her age. The hope is that she’ll get good body maturity, get stronger and adapts to training as she matures.”

“It will be an honour to represent Nigeria someday like my mother. It’s a dream I love to achieve in the future.”