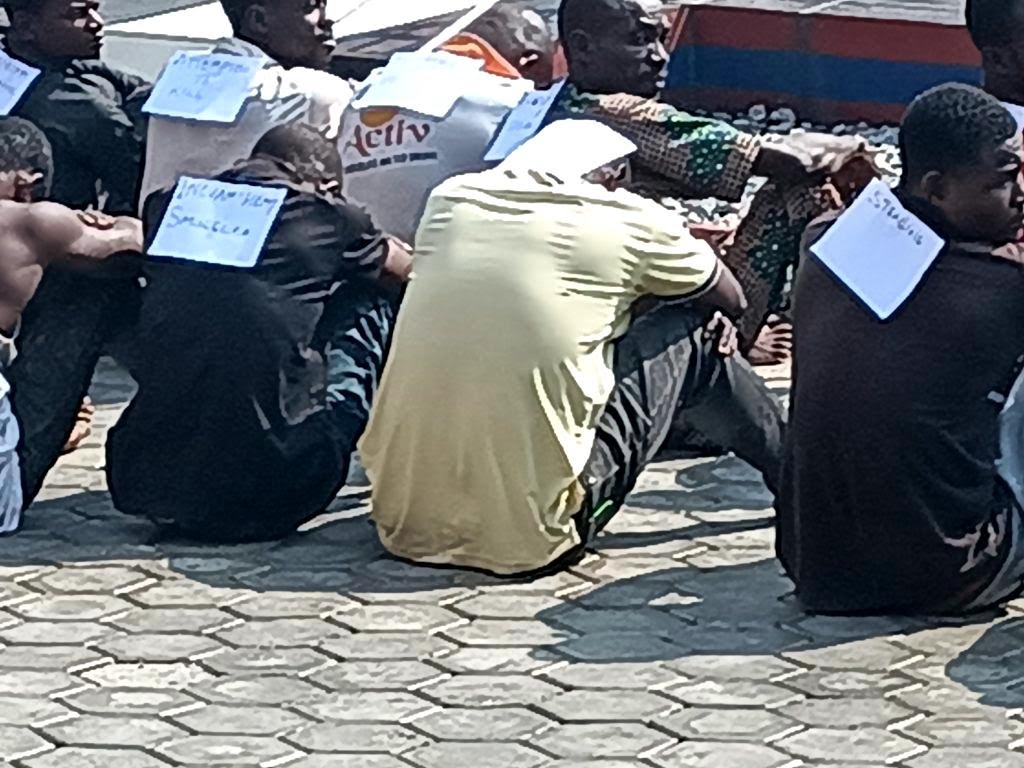 The Ondo State Security Network Agency codenamed Amotekun, on Friday paraded six members of a notorious syndicate that specializes in robbing unsuspecting residents of their valuables after drugging them with a chemical substance.

Speaking during the parade of the syndicate and 26 other suspects in Akure, the State Commander of Amotekun, Chief Adetunji Adeleye, said the suspects were arrested for various criminal offences ranging from armed robbery, kidnapping, illegal possession of firearms, fraud, and stealing among others.

He explained that the syndicate usually uses a chemical substance to spray the room of their victims in order to make them sleep, while they operate with ease, enter the house and dispossess them of their valuables, and at times, rape their victims.

He said: “We have a group of burglars that specializes in drugging unsuspecting residents of various houses, so, they will sleep off, break the burglary, enter their houses dispose them of their valuables while some of them are raped.

“And because of the high dose of drugs they injected on their system, some of them don’t even wake up, so, we’ve been able to break that syndicate too.

“They don’t normally have direct access to the victims, what they do is to jump across their fences, and pump in with syringes, these chemicals into their rooms, wait for about 30 to 40 minutes, every living thing inside the room sleeps off. So, whatever they do, you don’t know again”

Adeleye said the recent “Operation Gba’le – Gba’ko” launched by the Amotekun, for 24-hour inter-border surveillance and patrol across the southwest region has been yielding positive results.

Adeleye said, “On the border patrols, we’ve been able to rescue a couple of victims and some arrests are being made. Most of these arrests, after due diligence, will be prosecuted and the law will take its course on them.

“So, that is why we are here to show part of the dividends of operation gba’le-gbo’ko of the Ondo State Security Network Agency, we have 32 suspects here awaiting trial.

“That is why they take solace in the boundary of Edo and Kogi. But of late, I give it to the conventional Security agencies both in Ondo, Edo and Kogi states, we’ve been working together and we are seeing positive results”, Adeleye stressed.

“We had reports that innocent citizens doing their normal businesses are apprehended, kidnapped, robbed, especially around Oja Oba, first bank, post office, and Ilesa garage areas, so we lay siege and we were able to apprehend a group of syndicate that specializes in hypnotizing innocent citizens and they are either rubbed or kidnapped for ransom”.

Speaking on the kidnap of the traditional ruler of Oso community, Oba Clement Jimoh Olukotun, the Oloso of Oso, in Ajowa- Akoko, Akoko North-West Local Government, he said “as to the issue of the monarch, we tracked and we were able to have a very good idea of what was happening there but what is paramount to us is the life of the victim.

“No matter how beautiful an operation is, once the victim is killed, then, it is defeated, so, these are some of the constraints that are almost natural in the course of our job to slow down.

“We can assure you that some of them involved in the kidnap of the monarch will be apprehended.”