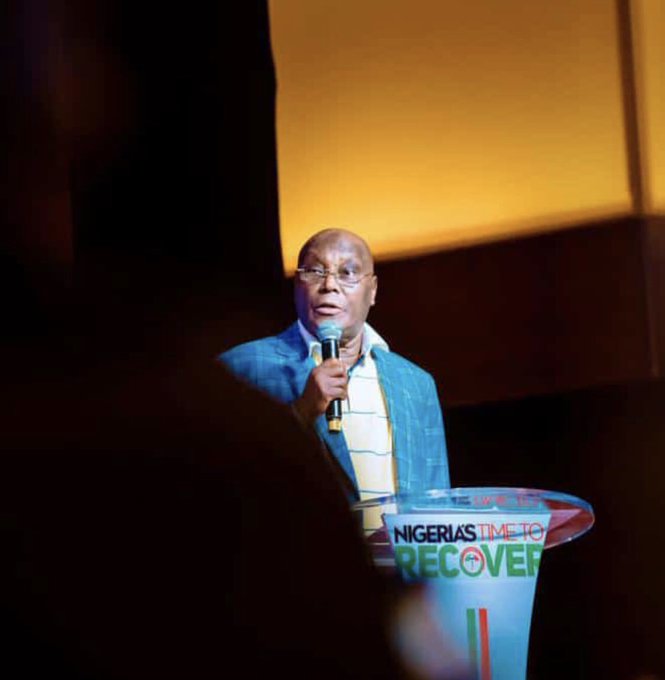 Atiku Abubakar, Presidential Candidate of the Peoples Democratic Party (PDP), has asked Asiwaju Bola Tinubu, his All Progressives Congress (APC) rival, to come clean on his source of wealth.

During an interview with BBC Focus on Africa, on Tuesday, Tinubu had said he “inherited” real estate which contributed to his wealth.

The former governor of Lagos also likened himself to the United States billionaire, Warren Buffet.

“Are they enemies of wealth, if they are not enemies of wealth–investments do yield. I have an example of Warren Buffet, one of the richest men in America and the world. He started with stock buying and brokerage. I inherited great real estate, I turned the values around.

“I am not denying my wealth. I was the most investigated, the most accused governor in opposition for eight years up to 2007. Since I left office, I am still there, I have not taken a government appointment, no government contract,” he had said.

But in a statement Phrank Shaibu, his Special Assistant on Public Communication, issued on his behalf on Sunday, Atiku challenged Tinunbu to come clean with his source of wealth.

“Obviously thrown off balance when the BBC reporter asked him to disclose the source of his stupendous wealth, APC Presidential candidate, Bola Tinubu, responded by asking, “Are you an enemy of wealth?” He subsequently told a fable of how he inherited properties and also traded stocks like Warren Buffet. This is complete hogwash.”

“Interestingly, Tinubu had told a Lagos State House of Assembly committee that was set up to investigate his academic records in 1999 that he could not complete secondary school because his family was too poor.

“The Governor spoke about his difficult and traumatic youth and how he scaled the hurdles of life as a self-made man. After his primary education, the governor said he was admitted into secondary school but he could not further his education because of his poverty. The Governor thus had to engage in menial jobs before he proceeded to the United States of America in search of the Golden Fleece,” the House report read in part.

“So how did Tinubu, whose family was too poor to send him to school despite a free education policy at the time, inherit properties from the same family? This is obviously balderdash. Tinubu would do well to stop comparing himself with Warren Buffet whose source of wealth has never been linked to narcotics by US authorities.”

The statement added that questions on Tinubu’s source of wealth did not start now.

“US authorities said Tinubu revealed in bank documents that he worked with Mobil Nigeria Limited in 1989 and his salary was just $2,400 and he had no other sources of income.

It added: “On the other hand, Atiku Abubakar’s source of wealth has never been in doubt. The ones he has listed publicly include: NICOTES (now Intels) founded in 1989; Prodeco, 1996; Atiku farms, 1982; and ABTI schools, 1992. Some of these companies like INTELS have had reputable Nigerians like the late General Shehu Musa Yar’Adua and even traditional rulers on its board. We dare Tinubu to list his companies and source of wealth as Atiku has done.”