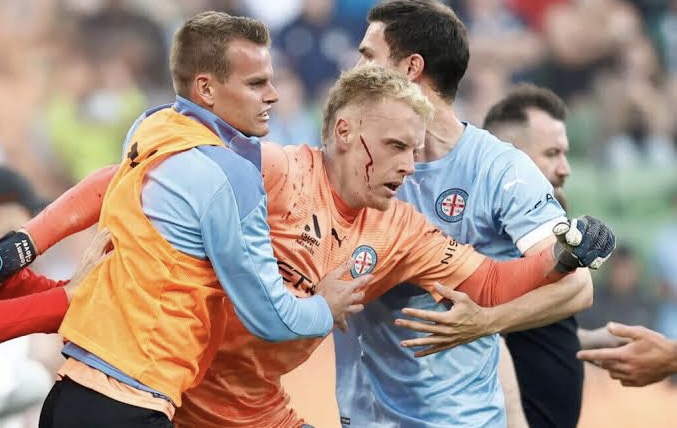 A derby game in the Australian A-League was brought to an abrupt end at the AAMI Park on Saturday after spectators invaded the pitch, injuring a player and the referee.

The incident occurred in the 22nd minute during the game between Melbourne City and their arch rivals Melbourne Victory in the A-League.

Melbourne City goalkeeper Tom Glover was hit with a metal bucket and referee Alex King, while trying to shield him, was also injured.

A TV cameraman was also injured by a flare.

Glover required several stitches on the field before being taken to the hospital.

His club confirmed that the 24-year-old went for further follow up checks after initial assessment by City’s medical team.

The invasion was said to have been triggered after the former Tottenham goalkeeper threw a flare back into the crowd.

Fans were said to have made their way into the field by breaching the advertising boards.

Before the chaos began, Melbourne City were already in the lead thanks to Aiden O’Neil goal in the 11th minute.

Melbourne Victory released a statement ‘unequivocally’ condemning the incident at the game, while saying both clubs shared the blame.

“The Club unequivocally condemns the actions of fans at Saturday night’s match against Melbourne City at AAMI Park.

“The actions that occurred, that saw spectators enter the pitch and injure a Melbourne City FC player, an official and a Network 10 cameraman, are not acceptable under any circumstance and have no place in football,” the club said.

According to BBC Sport, there were a series of protests by supporters prior to the kickoff. The protest continued during the match which was initially suspended then abandoned on player safety grounds.