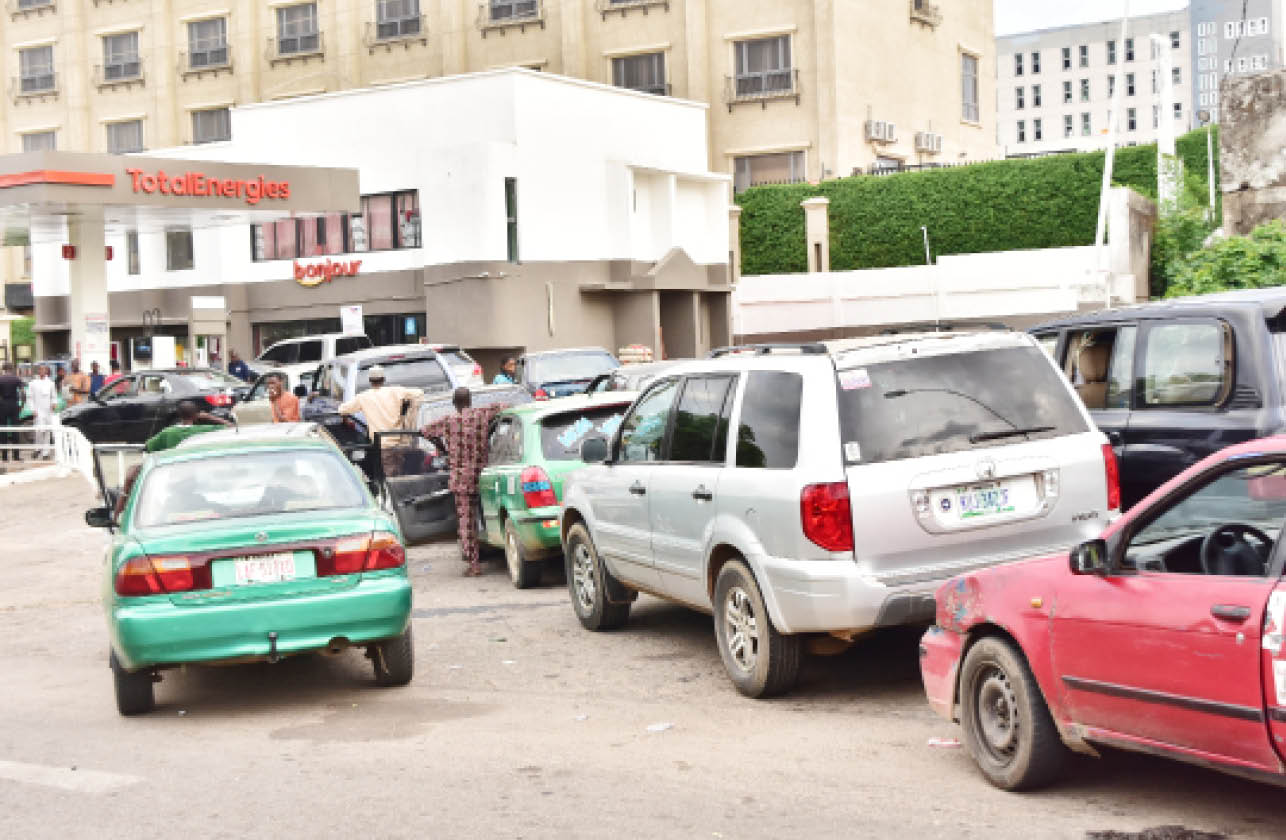 Forty-eight hours after the expiration of the ultimatum by the Department of State Services (DSS) to stakeholders in the oil sector, petrol scarcity has persisted in Plateau, Kaduna, Kogi and Kano states, and other parts of the country, Daily Trust reports.

The stakeholders had agreed to resolve the crisis.

But Daily Trust observed on Monday that long queues were yet to disappear in major cities, making black marketers have a field day, selling the commodity for as much as N350 per litre.

In Kano State, most filling stations did not dispense petrol yesterday. The few stations that had the product sold it for N310 a litre. Other stations in the state sold a litre for N280 to N290.

A motorist, Salisu Jibrin, said he had no option but to buy at N310 a litre because he could not join the long queues.

In Lokoja, Kogi State, motorists were seen on long queues at fuel stations; while in Kaduna and Jos, major fuel stations were not dispensing.

Yahaya Igono, a motorcyclist in Lokoja, said petrol was selling at between N210 and N285 per litre.

Several filling stations visited by our correspondent in Kogi were not dispensing petrol. A resident said: “A four-litre gallon of petrol is now sold at N1800 by black marketers.”

In Kaduna, stations visited by our correspondent were also not selling the product.

Salisu Mohammed, a commercial driver said: “Anyone who wants to buy fuel will have to buy from black market fuel stations, the major fuel stations hardly dispense fuel and even when they do, their priority is the black marketers.”

In Lagos, fuel queues are disappearing, but the price in some places ranged from N200 to N220 a litre.

While major marketers like Mobil at Isolo sold the product for N169/N170, some independent marketers sold a litre for as high as N230, N270 and N320.

In the City Centre of Abuja, queues eased as major fuel stations sold for N180 yesterday, but had persisted in the suburbs, such as Lugbe and Kubwa.

Marketers said only market forces could improve the situation along with strong supply and price control mechanisms.

The chairman, Northern Independent Petroleum Marketers Forum, Musa Yahaya Maikifi, said the private depot price was above N200, prompting marketers to sell above the rate in Kano and other states.

Reacting to the DSS’ ultimatum, Maikifi said it was a good step towards resolving the situation.

“Provided we’re not refining the fuel in our country and the NNPC is using dollars to import the fuel, we cannot end the fuel crisis in Nigeria,” he further stated.

The chairman, Major Oil Marketers Association of Nigeria (MOMAN), Olumide Adeosun, urged the federal government to dialogue and negotiate with citizens on the implementation of price deregulation.

“Having subsidized Premium Motor Spirit (PMS) or petrol for so long, Nigerian institutions now have a diminished capacity to deal with the current local energy crisis. Disruption in any part of the supply chain causes ripple effects and results in queues at stations,” he said.

According to the petrol stock data by NNPCL and the Nigerian Midstream and Downstream Petroleum Regulatory Authority (NMDPRA) issued on Sunday, Nigeria has 1.879 billion litres of petrol that could last for 30 days at an average of 60 million litres consumption daily.

An analysis of the data shows that the petrol stock on land across the depots has increased to 11 days from seven days last week. There is more supply that could last for 19 days on the sea and ports. There are 60 billion litres of petrol at the depots and 1.819bn litres around the marine area, including in vessels and ports.

Meanwhile, a source at the DSS headquarters told Daily Trust yesterday that “overt and covert operations” had begun.

“We’ve been gathering intelligence on the subject matter since last Thursday. The moment we get any destructive tendency, such person(s) will pay dearly for that.

“Our DG is committed to getting rid of the elements that can jeopardize the security of this nation,” the source said.

The petrol scarcity situation, which started during the last yuletide season, has persisted for months.

Private depot owners have been selling the product at N180/litre as against the approved N147/N150 ex-depot price.

This has been attributed to the forex differentials and the N500,000 trans-shipment charges by NNPCL at the ports.

In July, NNPCL had said without subsidy, petrol could have sold for N462/l. It noted that it paid about N297 for every litre consumed in Nigeria.

It also said the average international market-determined landing cost as of the second quarter of this year was $1.283 per metric ton (MT) and the approved marketing and distribution cost of N46/litre.

“The combination of these cost elements translates to a retail pump price of N462/litre and an average subsidy of N297/litre and an annual estimate of N6.5trn on the assumption of 60 million litres daily petrol supply.

“This will continuously be adjusted by market and demand realities,” the NNPCL noted.

But majority of Nigerians have been buying petrol at the black market price in the last few months despite the subsidy. Citizens expect that the amount being paid for subsidy should have come down.