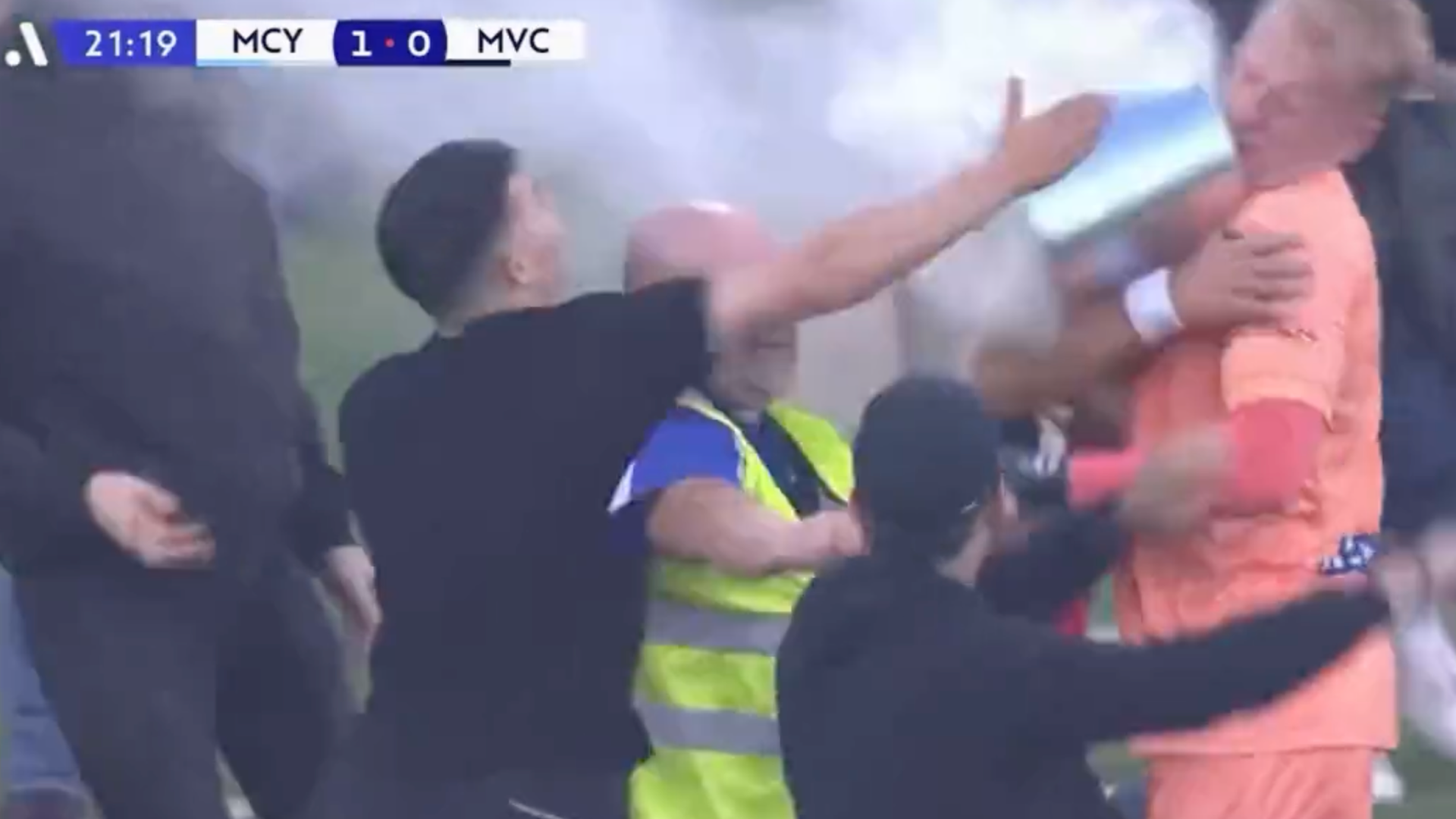 An Australian A-League game was called off 20 minutes in as the result of violent scenes in the Melbourne Derby on Saturday.

Trouble began shortly after kick-off as fans threw flares onto the pitch, while Melbourne City goalkeeper Tom Glover was then attacked and hit in the face by Melbourne Victory supporters with a metal smoking bin. 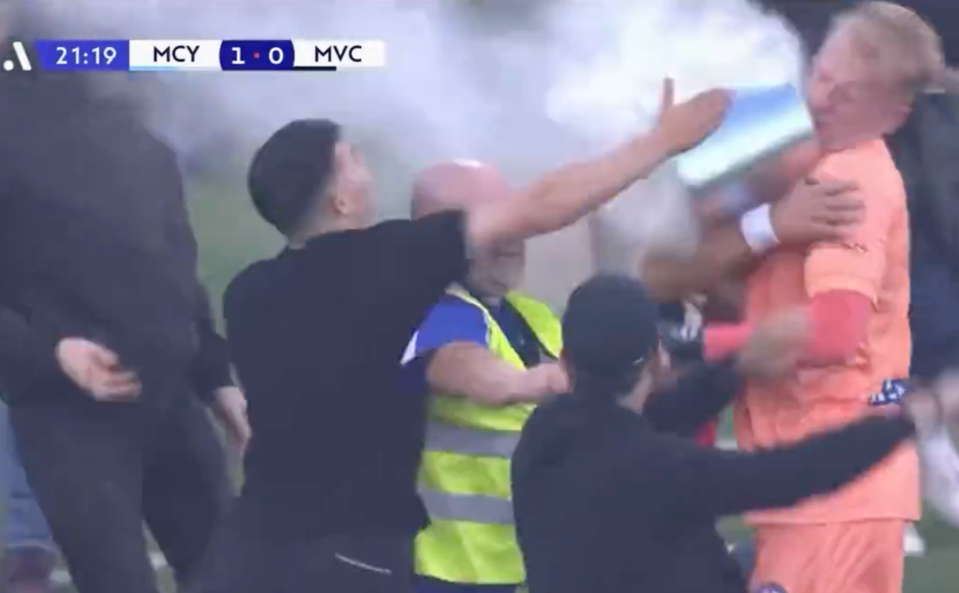 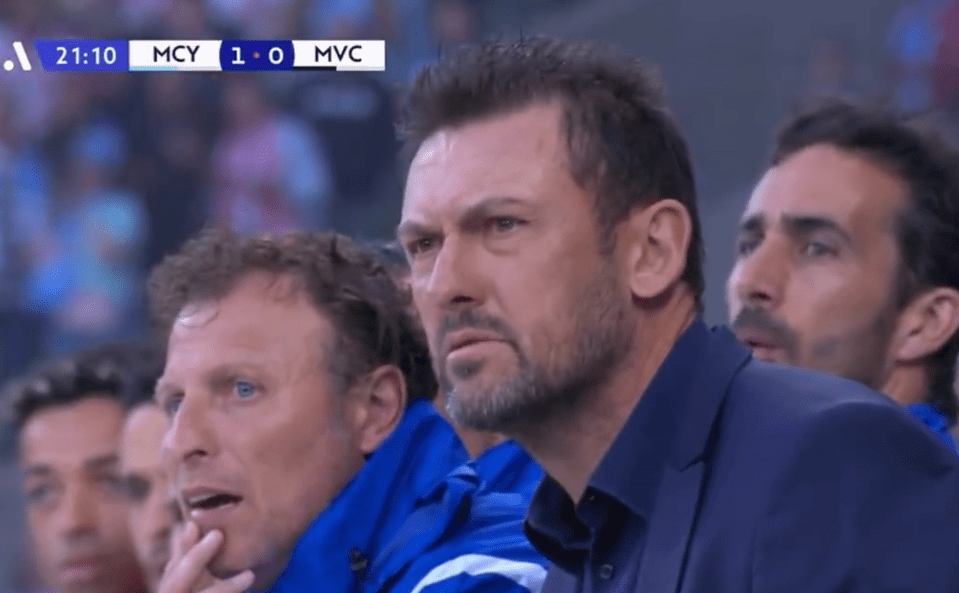 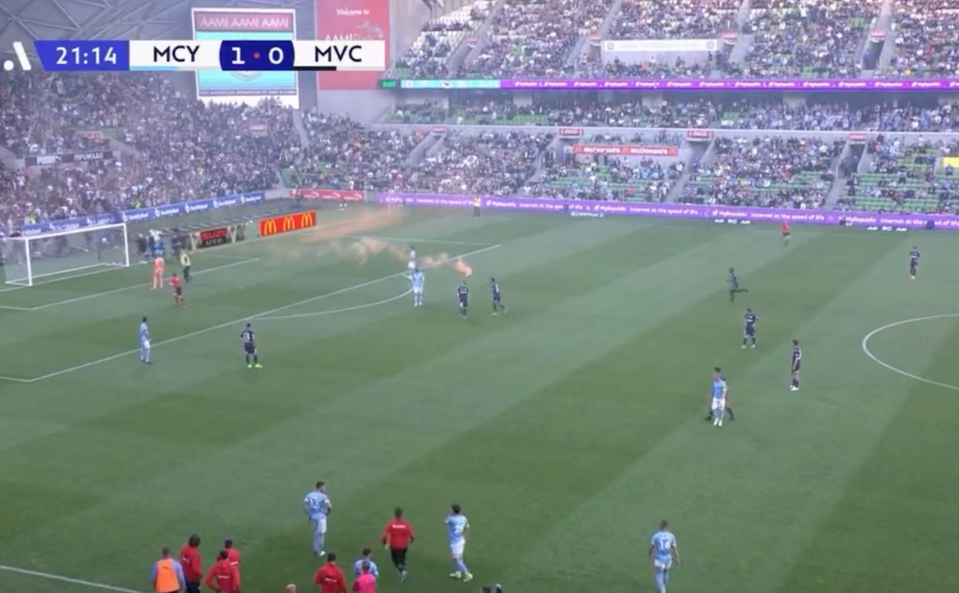 Flares thrown onto the pitch appeared to kick start the trouble

Players from both sides soon made their way off the pitch as fans entered the field of play.

Referee Alex King was also caught up in the incident with Glover, who was briefly at Tottenham in 2017, receiving medical treatment in the dressing room.

In one video, Glover, appears to throw a flare into the crowd where Victory supporters were sat, leading to more unsavoury scenes.

The match was at first suspended before eventually being abandoned as a result of the pitch invasion, with City having a 1-0 lead before the chaos ensued.

Football Australia, the game’s governing body, said the scenes at AAMI Park were ‘shocking’ and warned of punishments.

“Such behaviour has no place in Australian Football, with a full Football Australia investigation to commence immediately, where strong sanctions will be handed down.” Glover throws a flare back into the crowd Fans then knocked down the advertising boards before reaching the pitch

Fans are thought to have stormed the pitch as a part of a protest against the A-League’s decision to hold their next three grand finals in Sydney.

Such a decision was part of a $10million deal with the New South Wales government, with both the men’s and women’s finals set to take place there.

Previous seasons have seen teams earn the privilege of hosting such an event, with the new decision seemingly going against tradition.

Both sets of fans from City and Victory revealed before the match that they would walk out in the 20th minute.

Newcastle Jets fans did the same protest the night before in their fixture against Brisbane Roar, with Australian football fans clearly unhappy with the decision that has been made by their top flight league.