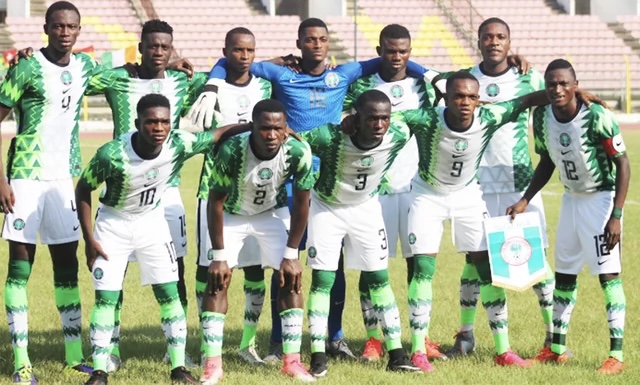 The Flying Eagles defeated Wikki Tourists 2-0 in a friendly match at the FIFA Goal Project, Package B of the Moshood Abiola National Stadium, Abuja, on Thursday night.

Lekan Adams opened the scoring for the Eagles in the 40th minute through a free kick from a close range to lead 1-0 at halftime.

On resumption, Olusegun Otusanya scored the second goal in the 89th minute to seal victory for the Eagles.

After the match, Abdullahi Adamu, chief coach of Wikki Tourists FC, attributed their loss to fatigue.

“They scored us as a result of fatigue because the second goal was an error by the goalkeeper, while the first goal was through free kick. So I believe it was fatigue that resulted in the goals,” he said.

The Wikki Tourists coach said the Eagles were fit and tactically better than his boys and that they “are responding very well in their training, and I believe that in the future they will do very well in the AFCON.”

Flying Eagles assistant coach, Folorunsho Fatai, said it was a good performance by the team.

“We have some lapses, but as we are progressing. We will be making necessary corrections,“ he said.

He also mentioned that they were trying to see how the team could improve their preparation for the AFCON tournament.

“Sincerely speaking, we are going to be working on all areas of our performance. We just believe that we are going to work harder to see that we correct our mistakes and errors,” added Fatai. “We have identified some of our errors, and from there, we will continue to improve our performance. We will also strengthen the team with more talented, skilful and purposeful players.”

The team will also take on Lobi Stars FC of Makurdi on Friday before playing a final game against Nasarawa United FC on Saturday.

The seven-time African champions have been in camp in Abuja in preparation for the 2023 U-20 AFCON in Egypt, slated for February 18 to March 16.

The Eagles qualified for the competition after winning the WAFU B regional tournament in Niger. All semi-finalists at the AFCON will automatically qualify for the FIFA U-20 World Cup in Indonesia.