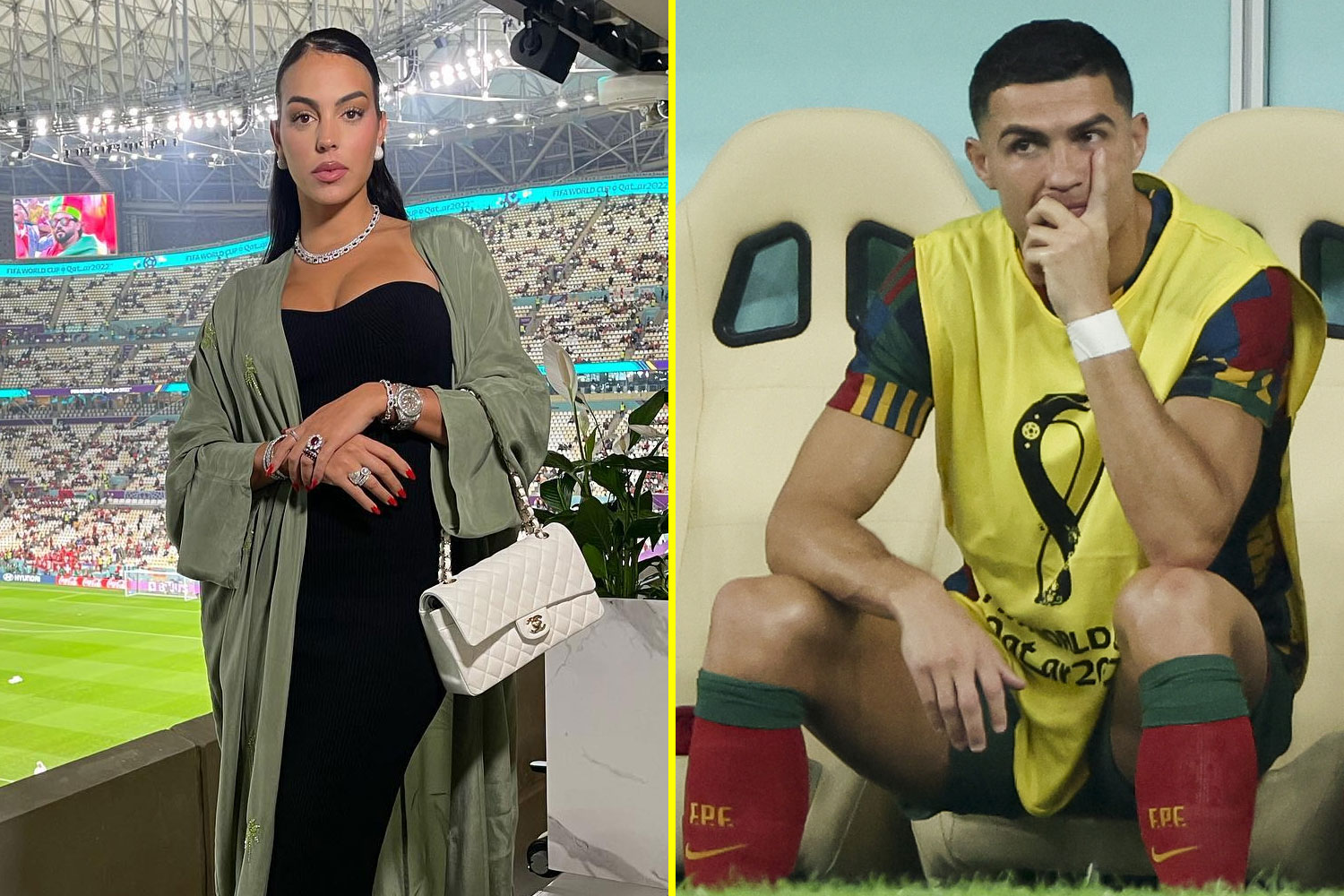 Georgina Rodriguez said it was ‘a shame’ for supporters that her partner Cristiano Ronaldo was benched for Portugal in their World Cup clash with Switzerland.

Despite the resounding 6-1 World Cup last-16 victory, the Argentine model used her Instagram page after the game to explain how desperate fans in the stadium were to see Ronaldo take to the pitch. 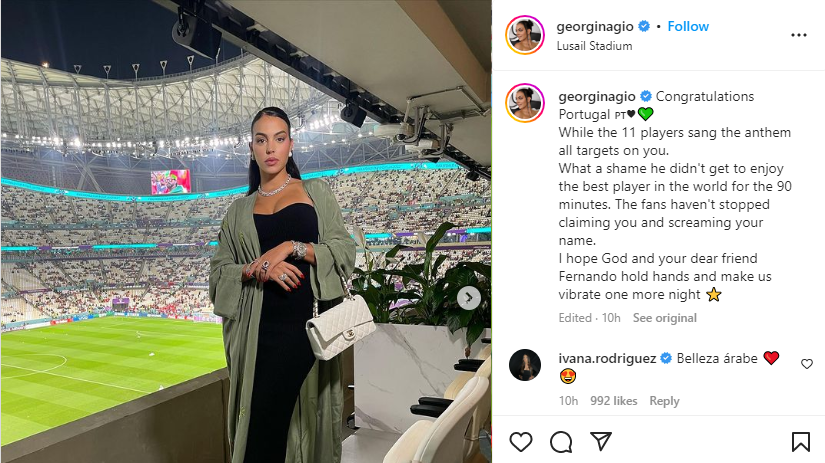 Ronaldo was left on the bench by Portugal boss Fernando Santos until the 73rd minute, while his replacement – Benfica wonderkid Goncalo Ramos – netted a hat-trick in their 6-1 demolition of the Swiss.

The former Manchester United star – who has registered one goal so far in Qatar – failed to find the net after coming on as a substitute with his side already 5-1 up.

Ronaldo’s sister had already posted after the game to say Portugal manager Santos ‘humiliated’ her brother by dropping him.

And Ronaldo’s girlfriend also felt the need to address her partner’s absence, too, sending a pointed message to Santos for leaving her man out of the starting XI.

Taking to Instagram after the game at the Lusail Stadium, the 28-year-old uploaded a photo of herself at the game and wrote: “Congratulations Portugal.

“While the 11 players sang the anthem all the targets placed on you. 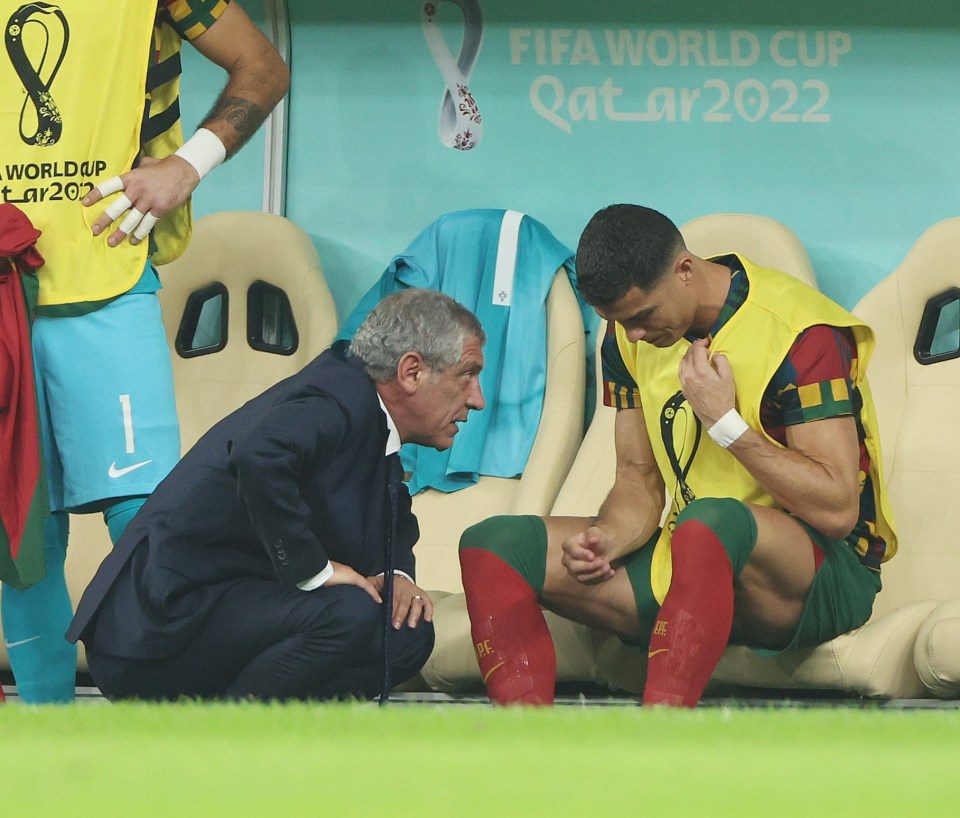 Ronaldo was left on the bench, and the people closest to him aren’t happy

“What a shame not to have been able to enjoy the best player in the world during the 90 minutes. The fans have not stopped claiming you and shouting your name.

“I hope that God and your dear friend Fernando continue hand in hand and make us enjoy one more night.”

Prior to his side’s last-16 tie, Santos had revealed he ‘didn’t like’ what he saw from Ronaldo in the game against South Korea, with the star appearing to be angry as he was subbed off in the second-half.

Ronaldo originally explained that he was firing his comments at opposition player Cho Gue-sung, which Santos initially confirmed.

But fast forward to his next press conference and Santos revealed he had a word with the centre-forward about his actions – perhaps explaining why he was left on the bench.

It was even claimed in Portugal that Ronaldo threatened to walk out on his team, which was subsequently denied by the team and player. 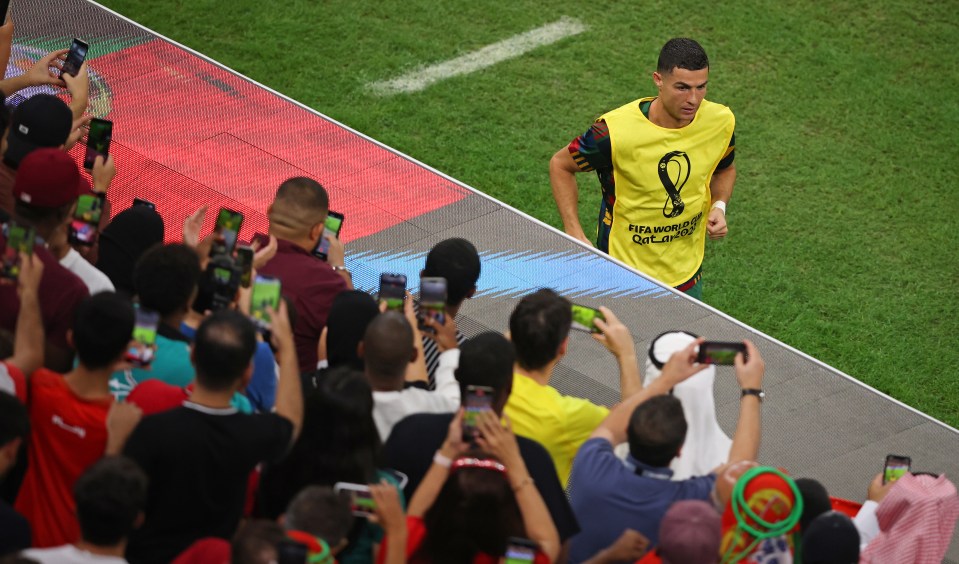 However, after Tuesday’s victory, Santos insists he has no problem with Ronaldo and argument is done and dusted.

He told reporters: “I have a very close relationship. I know him since he was 19 at Sporting and then he started to develop in the national squad when I arrived in 2014.

“Ronaldo and I never misinterpret the human and personal aspect with that of manager and player.

“I will always consider that he is a very important player to have in the team.”

Portugal next face Morocco in the quarter-finals at the Al Thumama Stadium on Saturday at 3pm.

It’s unclear whether he will play, although reports back home in Portugal claim Ronaldo could be set to return to the starting XI.

Meanwhile, his boss insists every member of the squad is needed, including his star man.

And CR7 quashed rumours that he would leave the national team with a tweet earlier this week: “A group too close to be broken by outside forces. A nation too brave to let itself be frightened by any adversary. A team in the truest sense of the word, which will fight for the dream until the end! Believe with us! Strength, Portugal!”

Tune into talkSPORT for LIVE commentary of Morocco vs Portugal in the World Cup quarter-finals, kick-off 3pm GMT