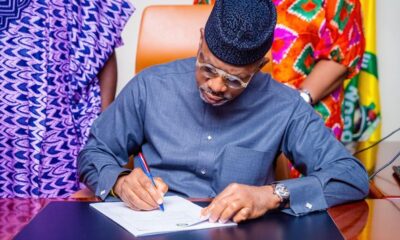 Abiodun said the SIP would “alleviate poverty and hunger as well as ensure equitable distribution of resources to the vulnerable, the poor and the widows, among others,” while signing the order into law at the Government House in Oke-Mosan, Abeokuta.

The SIP,  is established to alleviate poverty, hunger and ensure equitable distribution of resources to the vulnerable, the poor, the widows, traders, physically-challenged, the aged, among all other identified groups.

“It aims to improve the social economic condition of the people at the grassroots and consequently reduce poverty,” Abiodun stated.

The Governor added that the SIP committee would be chaired by a reputable indigene of the state with high integrity and relevant experience, while other members would comprise representatives from the Ministries of Finance, Community Development and Cooperatives, Youths and Sports, Local Government and Chieftaincy Affairs, Women Affairs and Special Duties.

Governor Abiodun who gave reasons for using an Executive Order to set up the SIP, said the order was to make the Committee answerable to the Office of the Governor.

It will also promote public awareness of this programme, to carry out other functions and engage relevant personnel as may be necessary to implement the social investment programme,” he added.

An Executive Order is a declaration by either a President or a Governor which has the force of law and isusually based on existing statutory powers vested on the executive.

They do not require any action by the National Assembly or State Assembly to take effect, while the legislature cannot overturn such orders.

Once issued, Executive Orders remain in force until they are canceled, revoked, adjudicated unlawful, or expire on their terms. However, such orders may be revoked, modified or altered by a new President or Governor whether the order was made by an incumbent or a predecessor.