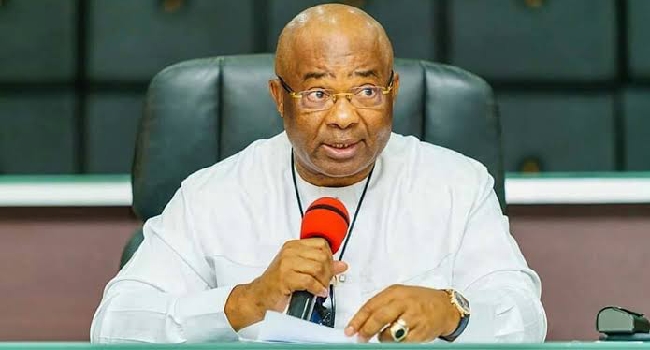 The Imo State chapter of the Peoples Democratic Party (PDP) has said that the poor performance and failure of Governor Hope Uzodimma are the major factors fuelling insecurity in the State.

The PDP in a statement on Monday, said this in reaction to Uzodimma’s earlier accusations at state police headquarters in Owerri that disgruntled opposition politicians were sponsoring the insecurity as well as attacks on facilities of the Independent National Electoral Commission (INEC) in the state.

The PDP publicity secretary in the state, Collins Opurozor, in a counter statement issued by  the party said Uzodimma’s bad governance had made insecurity to persist in the state.

“The Peoples Democratic Party in Imo State has reviewed the statement made by the Governor of the State, Senator Hope Uzodimma, in the aftermath of last night’s attack on INEC office in Owerri,” the statement reads.

“According to him, the attack was politically contrived by those who are desperate to win elections by all means.

“To say the very least, this jaundiced and false excuse has once again betrayed Senator Uzodinma’s abiding failure to keep Imo people safe. This governor can no longer defend his inability to deliver on the primary expectation of political governance, which is the security of lives and property.

“By the way, what else defines political desperation better than a man who came fourth in an election but usurped the people’s mandate through a judicial heist, and now sees himself as their feudal lord?