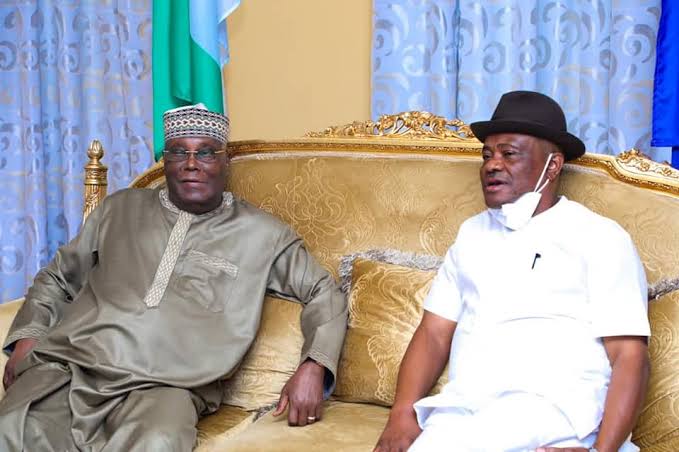 I have gone to meet Wike five times over PDP crisis, now am waiting for him – Atiku

Alhaji Atiku Abubakar, the Peoples Democratic Party (PDP) Presidential Candidate, says the ball is now in the court of the Rivers state Governor, Nyesom Wike, and his camp over the lingering crisis in the party.

Atiku said this at a townhall Channels Television organised in Abuja on Sunday night.

He said after meeting with the Rivers governor and members of his five times, he is now waiting for them.

Answering questions on why he has been unable to resolve the crisis in the party, the former Vice president said: “I have met Wike two times in Port Harcourt, two times in Abuja, one time in London, personally. It is not on my part; it is on the other side; I am waiting for him.”

Governor Wike and four of his colleagues Governors Samuel Ortom (Benue), Seyi Makinde (Oyo), Okezie Ikpeazu (Abia) and Ifeanyi Ugwuanyi (Enugu) and some stakeholders in the party had pulled out of Atiku’s campaign and launched what they called the Integrity Group.

They had concluded that until the National Chairman of the Party Dr Iyorchia Ayu resigns and is replaced by a southerner, they would not work for Atiku.

Meanwhile, all efforts by Atiku and other party stakeholders including the National Working Committee (NWC) and the Board of Trustee (BoT) to pacify the aggrieved parties have failed.

Wike lost the presidential ticket of the party to Atiku at the keenly contested primary election in May.

He also indicated interest to be Atiku’s running mate but the presidential candidate settled for Governor Ifeanyi Okowa of Delta.