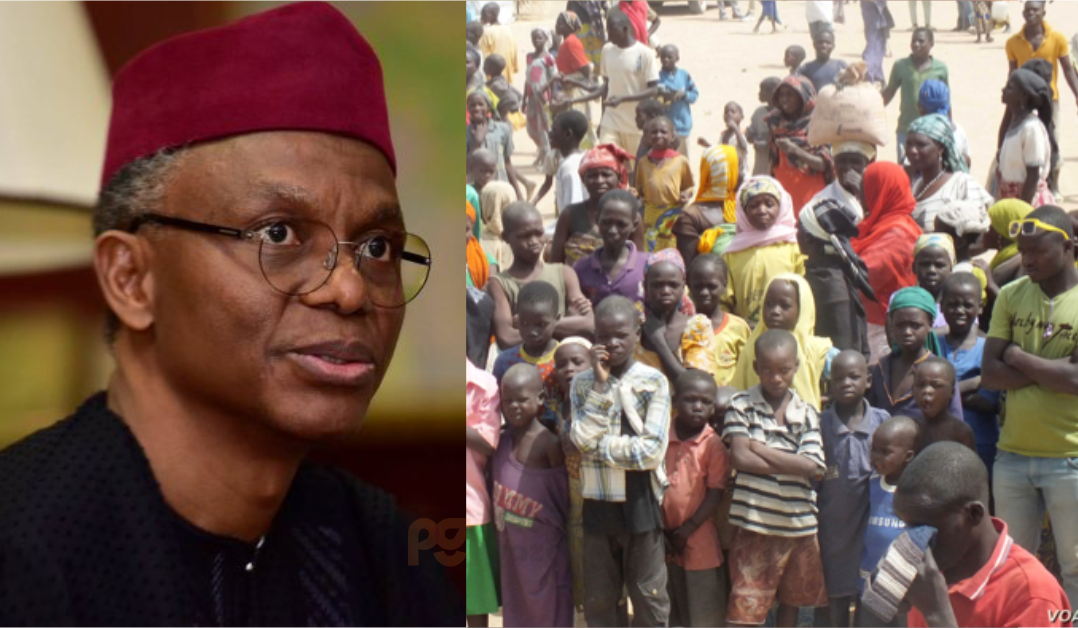 Internally Displaced Persons (IDPs) from different locations in Kaduna cried out for help over lack of shelter, hunger, and loss of means of livelihood.

In separate interviews on Wednesday, the IDPs camped in a centre in Kaduna said exacerbating kidnappings and bandits’ attacks in the state forced them out of their homes in 2020.

Many displaced persons, mainly from Birnin Gwari, Igabi and Chikun local government areas, are also currently taking refuge in safer communities at the homes of relatives.

Habila Madami, the chairman of the IDPs in the Zahu community, Gonin Gora, said their lives were hanging in the balance with no hope of the situation getting better.

Mr Madami, a father of eight, said they were forced out of their home at Rumana, along Lagos Road, Birnin Gwari local government, on January 6, 2020, by bandits.

“We are living a life of agony with no hope of returning to our homes in sight with our old fathers and mothers worried about where their children would be buried when they die,” he said.

He also cited hunger as a challenge threatening the survival of the IDPs, explaining that the displacement denied them access to their farmlands to feed their families.

The IDPs coordinator in the area, Caleb Nayaro, also said the displacement had forced their children out of school and lost their source of income to finance their children’s education.

Mr Caleb lamented the IDPs could not access healthcare services. According to him, the nearest facility was about three kilometres from Zahu.

“Our women and adolescent girls are now exposed to sexual violence and prostitution to survive, eat, and be able to pay rent,” Mr Nayaro said. “We have gotten over 50 requests from individuals who requested that we give them our children to take care of since we cannot cater for them, considering our homeless and starving situation.”

Abigail Iliya, 38, an IDP from the Paka Kadi community in Chikun LGA, said her family lost everything to bandits.

“We are currently selling fuelwood to survive, but it is risky and unsustainable, considering the risk of being raped in the bush while collecting the fuelwood,” Ms Iliya said.

Another IDP, Mary Luka, 30, a mother of five from Rumana and currently camping at the Federal College of Forestry, Buruku, expressed concern over her children’s future.

“The government and its partners can organise skill acquisition for internally displaced women to be self-reliant and be able to support their husbands to rebuild their lives,” she said.

Sharing his experience, John Tanko, 70, said he was forced to abandon his home in Wuya Village along the Abuja expressway when his brother was killed and his daughter kidnapped.

Another IDP, Saleh Nayaro, said he retired to his Rumana village, living an agrarian life when he was forced to flee.

“My farm produce was destroyed by herders, my cows and motorcycle were stolen at gunpoint by bandits, and (I) was forced out of my community with nothing,” stated Mr Nayaro.

The secretary of the IDPs coordination centre, Emmanuel Yari, revealed that the centre had a database of about 7,000 IDPs displaced from 2020 to date, living in different communities around the area.

The Commissioner of Internal Security and Home Affairs, Samuel Aruwan, said the number of people killed linked to banditry increased from 937 in 2020 to 1,192 in 2021.

He disclosed that the number of people kidnapped had also increased from 1,972 in 2020 to 3,348 in 2021, adding that the government was doing all it could to address the issues.