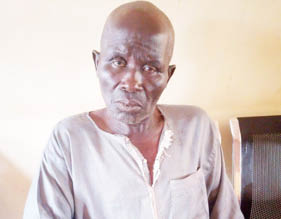 The police in Nasarawa State have arrested a 75-year-old man, Isa Nana Okpoku, for allegedly raping his four-year-old niece in Obi LGA.

Daily Trust finding revealed that Okpoku allegedly lured his victim into his room at the Daddare Development Area in Obi town where they both reside and defiled her.

“This was consequent upon a report that was lodged at the divisional headquarters on Saturday, 10/12/2022, at about 0800hrs.”