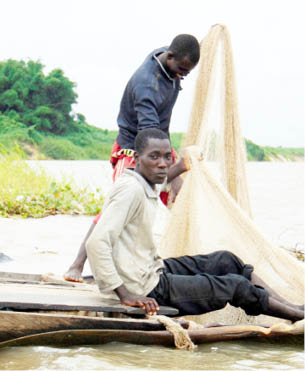 Gifted with a love for adventure and travel, Shuaibu Sodangi has gone on fishing expeditions, which took him from Ndoni, Rivers State through a large part of the rivers, tributaries, islands and creeks of the Niger Delta, ending up in the region of Equatorial Guinea.

In many parts of the Niger Delta, as well as some of the neigbouring countries, many fishermen of Hausa extraction can be found fishing with locals, learning languages, identifying fishing spots, marrying, mentoring fishermen and very much becoming part of the communities. This is a trading activity and relationship, which in some areas, maybe several centuries old.

Sodangi, who is the secretary of the Northern Community, Ndoni, comes from a family of fishermen who are well established in Ibi, Taraba State, and they number in hundreds.

There is the Nwunyo fishing festival at Ibi, which attracts countless fishermen when it holds, he said.

Sodangi’s roots, however, are not just restricted to Ibi, they expand handsomely and stretch back to Argungu in Kebbi State. And he is directly linked to the family of the Sarkin Ruwa or king of water, the traditional head who oversees the famous Argungu Fishing Festival.

Many years ago, and this seems to have occurred while Nigeria was still under colonial rule, many members of the family left Argungu and took a course that headed southwards, positioning many of them in different parts of the Niger Delta, Sodangi said. His family members can still be found playing significant roles in the local fish economy across a large swathe of the Niger Delta.

“In Ibi there is a ward famous for producing fishermen; and there are up to 100 fishermen in our family. My elder brother is the Sarkin Ruwa of Ibi, and we cannot do anything without his knowledge,” he added.

Sodangi said  he arrived Ndoni in 2011, shortly after the collapse of a business he was part of. “I called my brother and he asked me to come to Ndoni and fish. I was doing business in Port Harcourt and fishing was a part time activity for me at that time. Members of the family usually combine fishing with any other job or activity they are engaged in. Catfish and tilapia are some of the fish regularly caught around Ndoni.

“Right now, my boys are in Bonny, fishing. They will bring my share of the harvest soon. I am no longer interested in that area in terms of fishing.

“River Niger is peaceful, and there are no problems here. In a month we go out four times to fish. Each week, I spend three days and come back.

“There is no community you will go to in the Niger Delta and you will not find members of our family. At Asabase in Rivers State, for instance, my younger brother is very active there,” he said.

On what makes the Niger Delta attractive to Hausa fishermen he said. “The people are very friendly and generous. We don’t have problems with them. That is why we are here. They take us as one. The link with the Niger Delta starts with my community. My father married from the region. There are up to 50 women from the Niger Delta in our family.”

He said the Sarkin Ruwa title was domiciled in his family, stressing that the title has been in the family for up to 100 years.

“The family has roots in Argungu, Kebbi State. Some members of the family migrated from Kebbi to Ibi in Taraba to fish. They like to travel. We have always been like that,” he also said.

Sometimes his brothers travel from Ibi to Ndoni, using canoes to navigate a route that goes from Ibi to Lokoja, Makurdi, Onitsha and finally ends at Ndoni. This is a movement that continues to this day. His family has a mental map of all the excellent routes and fishing spots from Ibi to the Niger Delta.

“As we speak, one of my younger brothers is on the way from Ibi through the river. I remember that during the 1992 census, I travelled from Ndoni to Ibi, following the river,” he added.

At the Ndoni riverside, many Hausa mechanics can be found repairing engines of speedboats and other types of boats in the area. It is a very busy part of the area.

Musa Abdullahi arrived at Ndoni in 2005 and engaged in fishing but ended up as a mechanic. He had worked as a mechanic in Ibi before travelling. Three mechanics work under him. He services seven boat engines every day, and he charges N10,000 to repair one engine.

In another part of Igbo-speaking community, Daily Trust on Sunday saw young Hausa and Jukun men who were busy building boats, which is slightly new in Ndoni.

Emmanuel Morris, a Jukun, was building boats at Abinsi, Guma Local Government Area of Benue State before he recently moved to Ndoni to continue. The Jukun are excellent fishermen and boat builders.

Morris, who said he had been building boats for two months at Ndoni, added that iroko wood is the best for the job and it is available in large quantities in Omoku, a neighbouring community which lies 30 minutes away.

Ndoni to Cameroon by boat

Stressing that he was born with the gift of boat making, he said, “The boat we have just finished building can comfortably accommodate 50 persons; and can last five years before it will need any major repair. It can even be used to travel to Cameroon from Ndoni. The amount required to build this type of boat is N240,000.”

Sani Usman, the chairman of Northern Community in Ndoni also said, “I am Nupe. My father brought me to Ndoni in 1971.  He was a fisherman, so he used a boat to bring us to Ndoni from Onitsha. I was born in Onitsha and I lived at AnaEze for many years.”

Speaking of many communities along the waterways and islands where Hausa fishermen can be found, he said, “There are Hausa people in AnaEze and Abaragada, a nearby island in Delta State. At Aboh in Delta State, the Hausa are involved in fishing.”

Usman added that most Hausa people in Ndoni and nearby communities were from Ibi and Wukari in Taraba State, as well as Jukun. He explained that crises in Taraba State pushed some of them to Ndoni.

Like Sodangi, he explained that Ndoni is a peaceful community where visitors are welcome and given a free hand to find work and earn a living. He said engine repairs, carpentry and fishing were available for the people.

He further said, “The Rivers State Government is not taking care of the Hausa in Ndoni. We produce catfish, tilapia and many other types of fish. We do a lot for the local economy but there is no assistance from the state government. We have to struggle on our own. Anybody who leaves Port Harcourt to come here does so with the intention of buying fish produced by Hausa men.

He added that the population of the Hausa is increasing in the area. He estimated the number of the people in Ndoni and nearby islands and communities at 1,500.

He also said, “Ndoni is a peaceful area. Anyone who comes will want to reside here. This is why the Hausa are increasing in number despite the fact that we are not assisted by the government. As long as you reside in Ndoni without any bad intention, you will enjoy it. We welcome people from different places, as long as you are here to do a legal business.”

Opene Peter Chukwunwike, a councillor representing Onelga ward 14, Ndoni, said the people of the community were closer to the Delta Igbo than those in Imo, Abia and Anambra.

On the alleged neglect of Hausa members of the community, he replied, “I will disagree with that. As far as Rivers State is concerned, every tribe has people representing them. There is a leadership in Port Harcourt. There is Sarkin Hausawa. Anything that comes from the state, the governor will call upon the Sarkin Hausawa, who will reach out to other members of the community’.

Ndoni, a four-hour drive from Port Harcourt and the hometown of Peter Odili, a former governor of Rivers State, is peaceful and located by the River Niger.