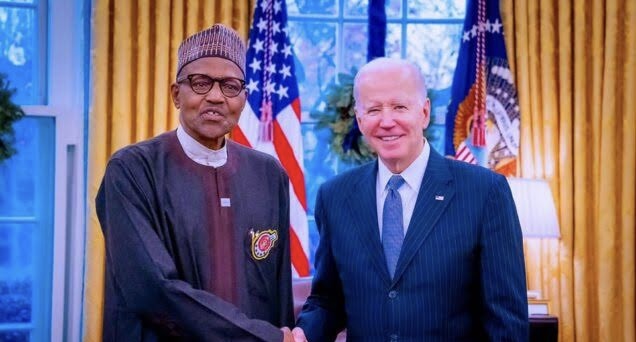 President Muhammadu Buhari on Friday assured U.S. potential investors of massive investment opportunities in Nigeria, especially in the non-oil sector of the economy.

Mr Buhari gave the assurance at a dialogue session with some U.S. Investors, Nigerian officials, diplomats and as well as experts from the private sector in Washington D.C. on Friday.

The Presidential Dialogue: Nigeria Business and Investment Forum was held on the sidelines of the 2022 U.S.-Africa Leaders Summit.

The session was held behind closed doors while the Panel session on “Nigeria: A compelling Investment Haven’’ was opened for officials and Nigerians to discuss.

Mr Buhari said the outcome of the massive efforts and investments by his administration in Infrastructure Development and Refurbishment, i.e. Road Construction and Rehabilitation, Investment Tax Credit Policy, led to the reconstruction of 21 selected Federal Roads, totaling 1,804.6 km.

“With regards to railways, sea and air ports as well as energy, which are expected to facilitate movements of people, goods and services as well as sustain the stabilisation of industries and their growth respectively.

“The outcome of Government efforts are well documented in basic facts on Nigeria, which you can easily access for your education and use,” he said.

He said Nigeria like other countries, including the developed economies, is facing economic challenges, occasioned by the disruptions as a result of the COVID – 19 pandemic and  the ongoing Ukraine war and the Climate Change, in which massive flooding is one the manifestations.

Notwithstanding these global challenges, he said Nigeria had witnessed seven consecutive quarters of growth, after the negative growth rates recorded in the 2nd and 3rd Quarters of 2020.

“Nigeria’s GDP grew by 3.54 per cent year-on-year in real terms in the 2nd Quarter of 2022, which represents a sustained positive economic performance, especially for the Non-Oil GDP which fell by 4.77 per cent in Q2 2022 against Oil GDP that grew by -11.77 per cent.”

The Nigerian leader said the statistics continued to indicate that most sectors of the economy recorded positive growth in spite of these challenges, which reflect the effective implementation of the economic sustainability measures introduced by the administration.

“For our economy to favourably meet up with global digitisation, Nigeria embraced Communication and Digital Economy.

“Already, the broadband coverage of the country stands at 44.32 per cent and 77.52 per cent. 4G coverage has also been achieved, with the establishment of 36,751 4G base stations nationwide.’’

Mr Buhari said bearing in mind the necessity for adequate and sustained power supply as a prerequisite for any socio-economic and industrial development, he said his administration placed the power sector as a critical priority area.

“In the pursuit of our energy development, Nigeria remains mindful of her commitment to carbon neutrality by 2060.

“In this regard, our administration launched an Energy Transition Plan (ETP) in September, 2022 aimed at meeting the national energy needs, in line with Nigeria’s net zero target.

“The Energy Transition Plan is a home-grown, data-backed, multipronged strategy developed for the achievement of net-zero emissions’ reduction across five (5) key sectors; Power, Cooking, Oil and Gas, Transport and Industry.

“The Energy Transition Plan (ETP) is therefore a huge investment opportunity in the gas sector,” he said.

According to him, peace and security have become global phenomena, in relation to human activities, including governance and businesses.

“While peace enhances the climate of stability and potential progress, insecurity is not only the reverse but also makes our collective future unpredictable.

“As a country and sub-region, we continue to make sustained investments and efforts to strengthen our national and sub-regional security.”

In such circumstances, Buhari said Nigeria continued to treasure strong partnerships with friends and allies in our national, continental and global efforts for safety and survival.

“It is our strong belief that these determined efforts will rekindle interest to invest as well as enhance the volume of your investments in the Nigerian economy,” he said.

No fewer than 65 attendees, made up of Nigerian governors, ministers, diplomats, government officials, private sector experts as well as potential investors attended the event

In a related development, Minister of Trade, Industry and Investment, Niyi Adebayo, said Nigeria had demonstrated a commitment to a clean energy transition.

“However, the overall energy transition programme requires investments of over $300 billion dollars in order to achieve net-zero emission targets,’’ he said.

Mr Adebayo spoke at a meeting on “Regional Cooperation and the Future of African Energy: the Role of Nigeria and Morocco” on the sideline of the 2022 U.S.-Africa Business Summit on Friday.

According to him, the investment required a challenge and a massive opportunity.

“For instance, in addition to mobilising conventional capital, it is critical that we become significant participants in the global carbon finance market.

“The good news is that we have, especially in recent years, embarked on far-reaching reforms of Nigeria’s investment environment, as has been evidenced by the marked improvement in our global rankings.

“This will facilitate easy integration into the global marketplace for conventional capital and other innovative financing.”