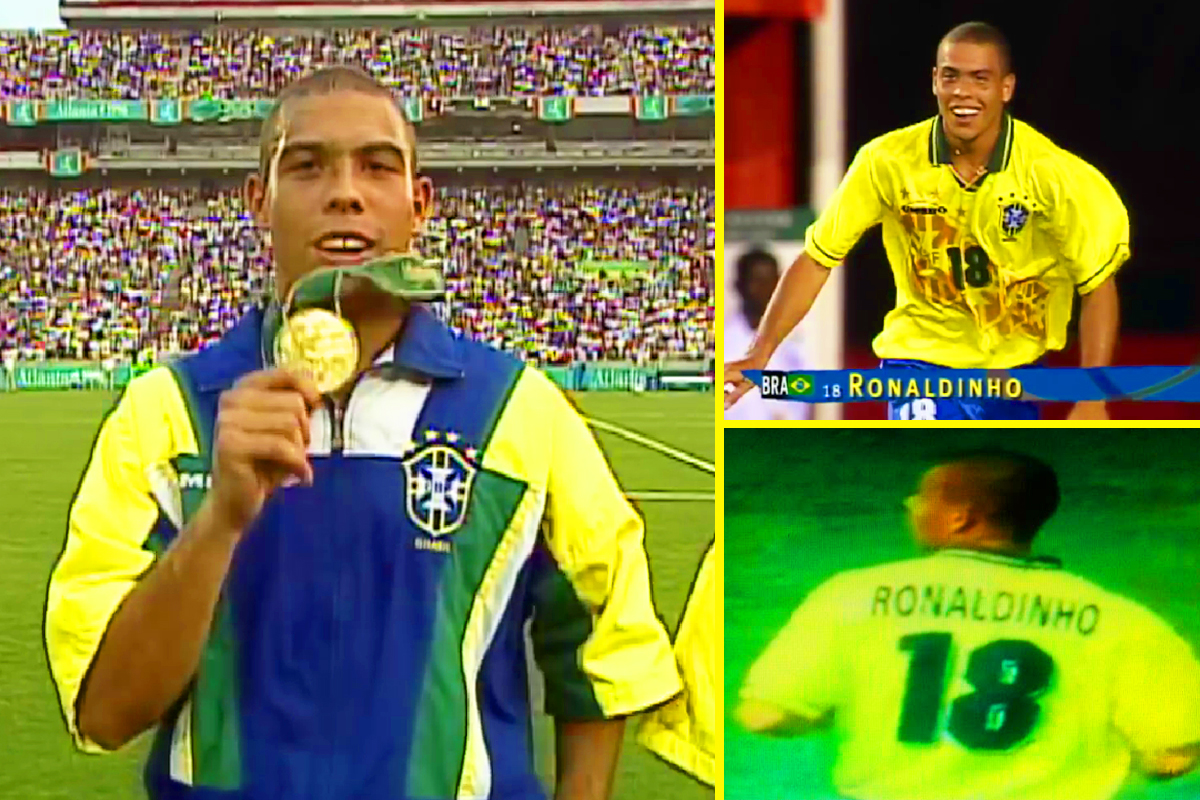 Ronaldo Nazario will always be known as one of the greatest strikers to ever play football and an idol to millions around the world.

The heroics of ‘El Fenomeno’ at the 2002 World Cup are etched into history as Brazil triumphed, though perhaps not many recall he also represented his country at the Olympic Games a few years earlier in America. 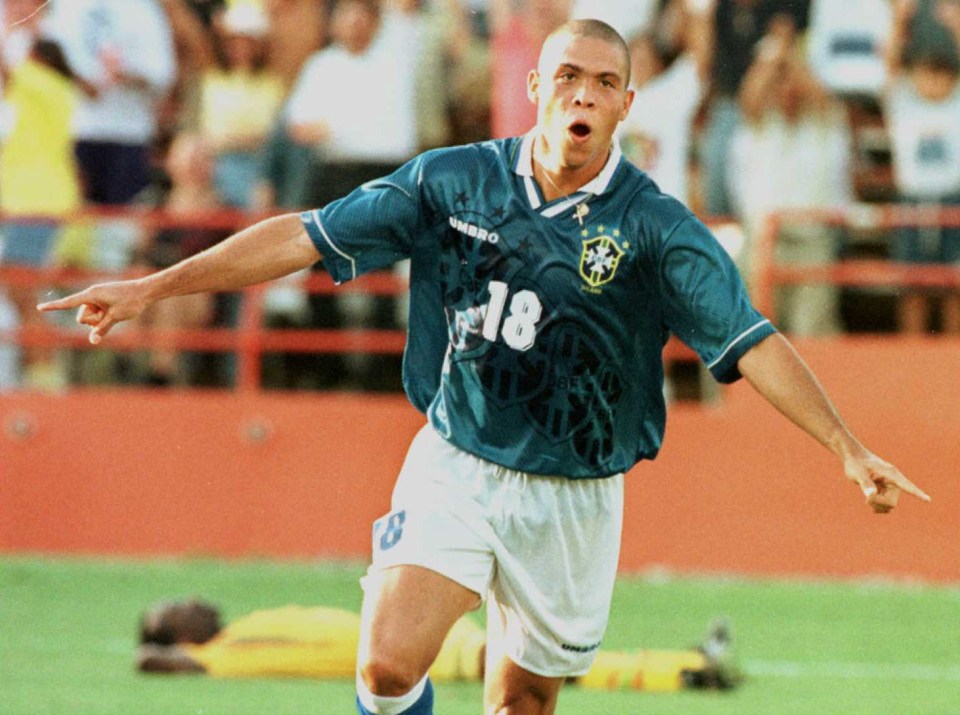 Ronaldo was the biggest star of the ’96 games

In 1996, Ronaldo, then, 19, topped a star-studded Brazil team who attended the Atlanta games.

He had previously been picked for the 1994 World Cup squad, but was just 17 at the time and did not play a single minute with Brazil winning the tournament without his influence.

The Olympics tournament was for under-23 players, with three exceptions permitted.

They were determined to bring home Brazil’s first ever Olympic gold for football, but would be met with fierce opposition.

Amid the abundance of talent at the tournament, Ronaldo was the clear star name of the future. 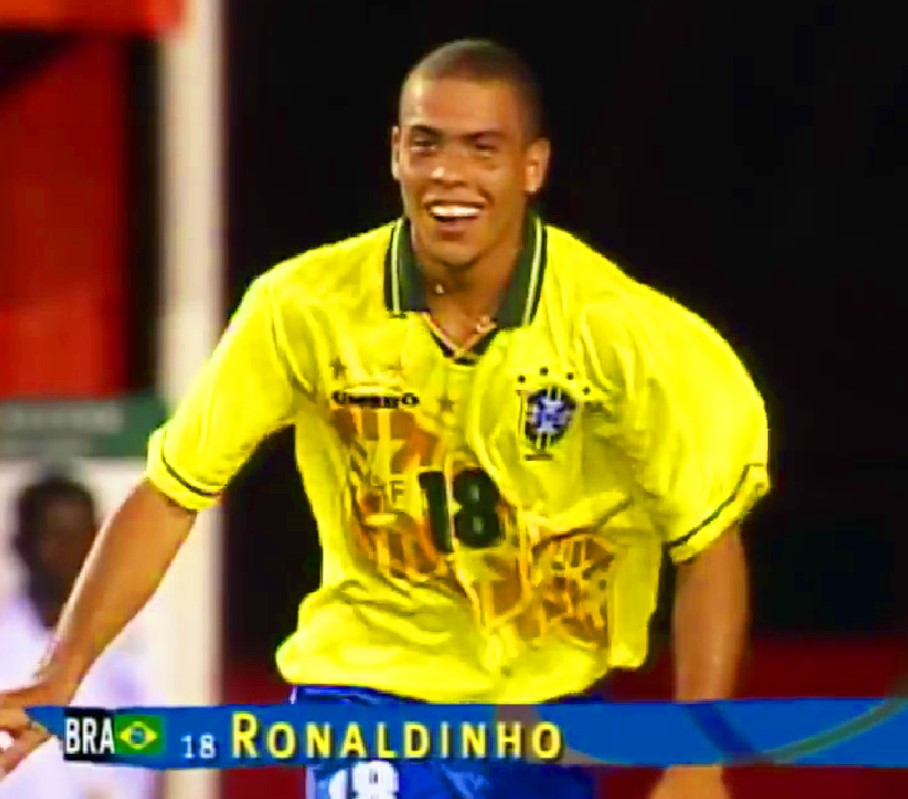 Ronaldo was known as ‘Ronaldinho’ at the 1996 Olympics

However, he didn’t even play under his own true name.

Back in the early stages of his international career, Ronaldo was actually known as ‘Ronaldinho’ (which means little Ronaldo in Portuguese) and had that name on his shirt.

This was because Ronaldo Rodrigues de Jesus, his older teammate at the 1994 World Cup, was also called Ronaldo and nicknamed ‘Ronaldao’ (which means big Ronaldo).

When the true Ronaldinho initially joined the Brazil setup, he had to be known as ‘Ronaldinho Gaucho’ so he wasn’t confused with R9. 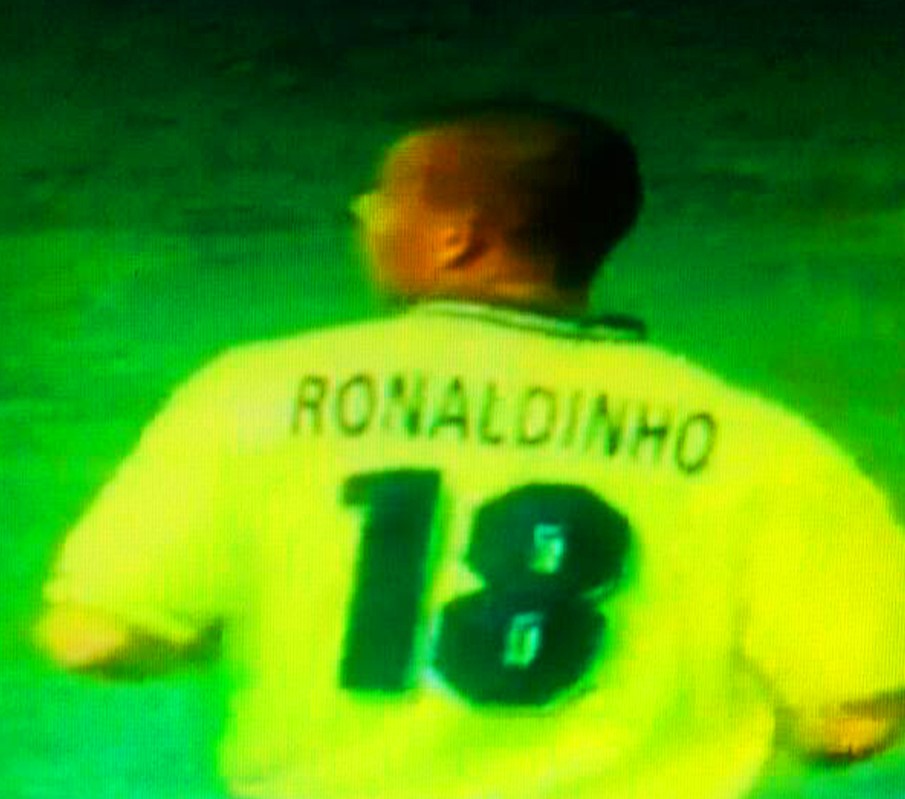 He even had ‘Ronaldinho’ on the back of his shirt

Eventually, El Fenomeno became the oldest Ronaldo and reclaimed his true name, but at the 1996 Olympics, Ronaldo also went under ‘Ronaldinho’ as another teammate, Ronaldo Guiaro, was two years older than him.

R9’s Brazil were drawn in a group with Japan, Hungary and dark horses Nigeria.

Remarkably, they lost their opening game 1-0 to the Japanese, but Ronaldo came alive in the other two group matches.

El Fenomeno fired home Brazil’s first goal of the tournament in their 3-1 win over Hungary with Juninho and Bebeto also finding the net. 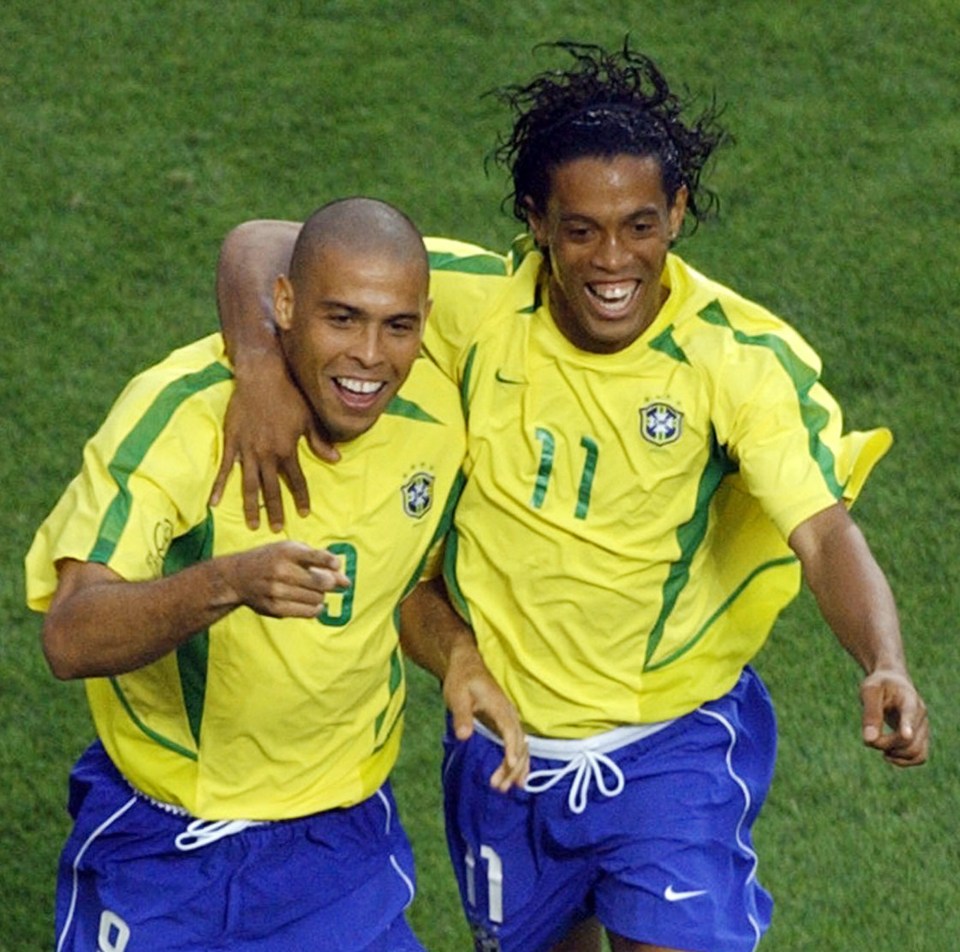 Ronaldo and Ronaldinho won the World Cup together in 2002

Then, in the final group game against Nigeria, Ronaldo led his side to a 1-0 win with a goal from outside the box.

In their quarter-final against Ghana, the 19-year-old took centre stage again and bagged a brace in a 4-2 win.

Next, owing to the format of the tournament, Brazil met Nigeria again in the semi-final.

The result appeared pre-determined given the 1-0 win that had gone in Brazil’s favour just six days prior. 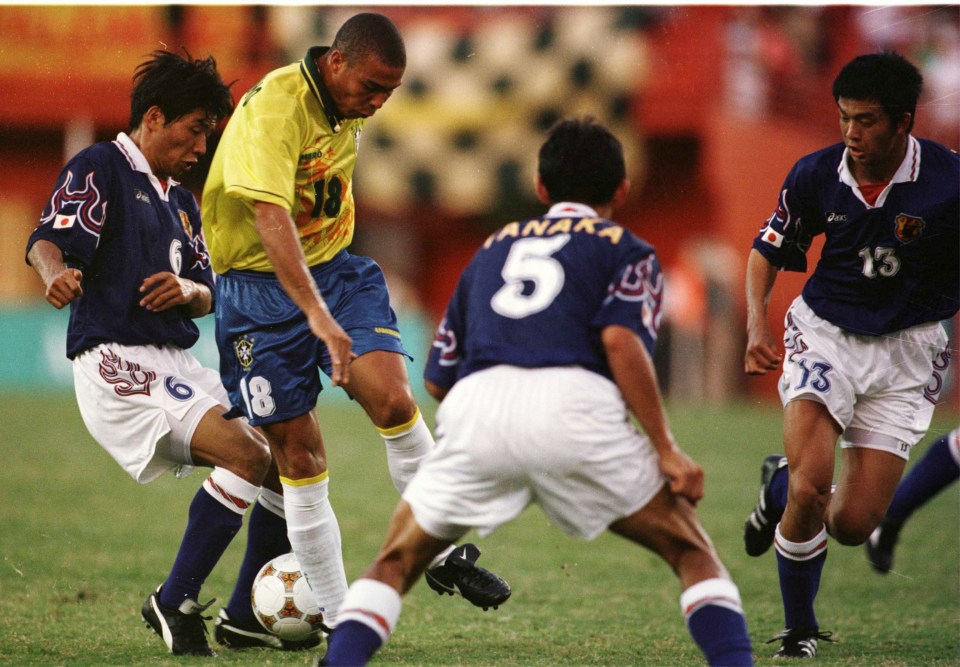 Ronaldo was hard for defenders to handle at the 1996 Olympics

Flavio Conceicao put Brazil ahead in the opening minute, but this time Nigeria hit back as Roberto Carlos scored an own goal.

Before half-time though, Conceicao scored again and Bebeto added a third to put Brazil in a commanding lead.

With 15 minutes to go, they seemed destined for the gold medal match.

However, Victor Ikpeba scored in the 78th minute to inspire a remarkable recovery and 19-year-old Nwankwo Kanu levelled the game in stoppage time.

Kanu then scored a golden goal winner early in extra-time to astonishingly dump Ronaldo’s favourites out of the competition – 4-3 the final score.

Nigeria, who also had Taribo West (22), Celestine Babayaro (17) and Jay-Jay Okocha (22) among their ranks, went on to upset Argentina 3-2 in the final and win a highly unexpected gold medal.

Brazil were left in the bronze medal match.

Ronaldo found the net once more in a 5-0 thrashing of Portugal to make sure he left with a medal, albeit not the one he wanted. 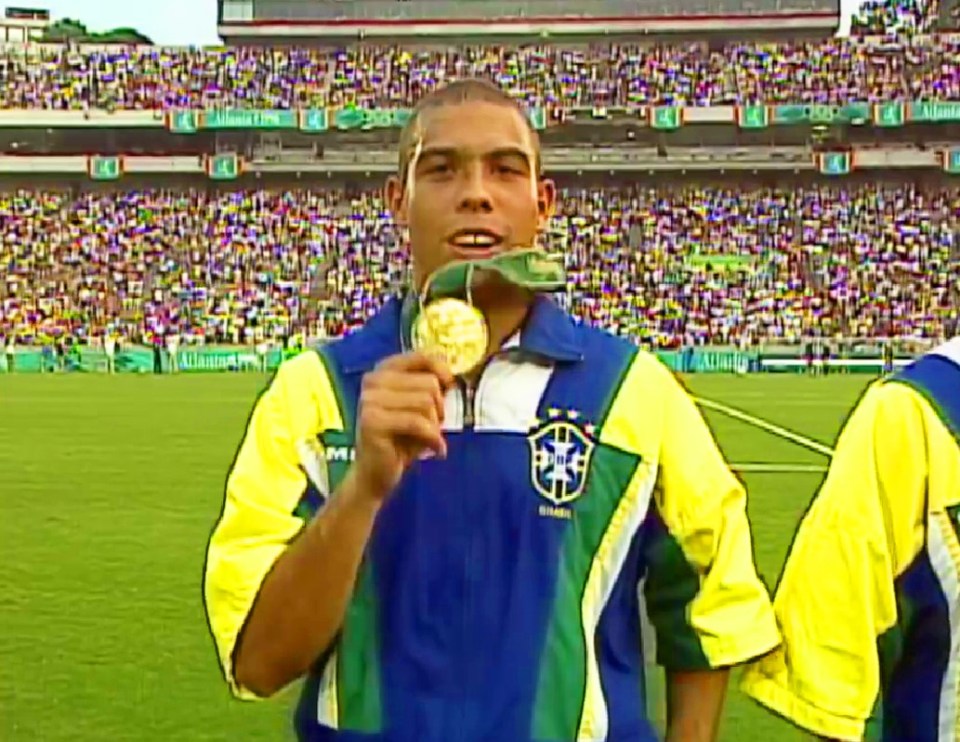 Ronaldo won an Olympic bronze medal, although in this picture it appears golden

Ronaldo recalled to InsideTheGames years later: “It was an amazing experience.

“Brazil played really well up to the semi-final when we were 3-1 up against Nigeria with 10 minutes to go.

“Unfortunately the team fell asleep and managed to lose 4-3, and could not realise the dream of the gold medal…

“My bronze medal is important – all athletes dream of an Olympic medal and for that reason [mine] is at home in an important place.

“I think that the Olympics are very important throughout the world for all athletes.

“Football is such a big passion worldwide that the World Cup is always going to be the most wanted trophy but the Olympics is such a good chance for the under-23 players, to promote these talents on the world scene.”

Ronaldo scored five goals at the 1996 Olympics and lit up the games with his youthful exuberance, even though an imposter named ‘Ronaldinho’ claimed all the credit.