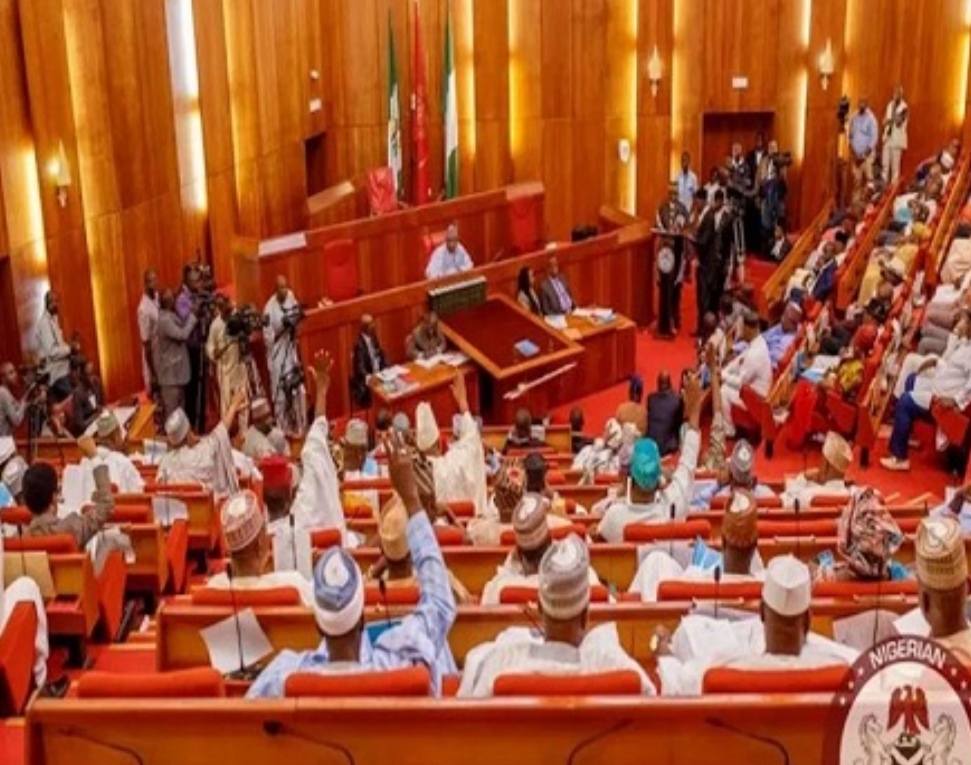 The Senate has agreed to debate the latest cash withdrawal limit of the Central Bank of Nigeria (CBN) on Wednesday following the absence of Chairman of the Committee on Banking and Finance, Uba Sani.

Member of the Committee, Olubunmi Adetumbi, in a Point of Order revealed that owing to Sani being away attending the All Progressives Congress (APC) presidential rally in Kaduna the scheduled report for today’s plenary will not take place.

Adetunmbi said the panel’s chairman was billed to present the report of the screening exercise conducted for the two CBN Deputy Governor-nominees, Aishat Ahmad and  Edward Lametek Adamu.

Both Ahmad and Adamu were recently reappointed by President Muhammadu Buhari who requested the Senate’s screening and confirmation for their second and final tenure at the apex bank.

Ahmad, who is the CBN Deputy Governor on Financial System Stability and Adamu were quizzed. They explained details of the policy to the Senate panel during the screening exercise last week  when she and her colleague, appeared for screening.

It was gathered that more evidence was demanded to enable the committee to fully understand the issue behind this policy, “This meeting took place on Thursday last week, the two candidates came for clearance, and the issues were thoroughly asked.

“Especially in the open address by the chairman, he specifically reported the request that the two deputy governors currently serving and seeking the appointment should elaborate and explain the rationale behind this policy in view of the massive public reactions to that policy.”

Also, Adetunmbi said, “The deputy governors gave very elaborate explanations and the committee also requested for further evidence in terms of documented reports that will enable the committee to fully understand the issue behind this policy and be able to brief the plenary appropriately.”

“Unfortunately the report is not ready today because the chairman of the committee is busy on a political assignment where has will receive very special politicians in the presidential he is coming tomorrow to present the formal report of the committee.” He added

Bulkachuwa said the fact that the panel didn’t submit its report should not stop the Senate Debate on the CBN Nara withdrawal limit policy.

He said, “We should not allow this thing to be swept under the carpet, it is a very serious issue and Nigerians are waiting to see what the Senate will do like the House of Representatives.

“The House of Representatives has asked the Governor of the Central Bank to stay action on this, leaving it till tomorrow is giving him another and another excuse and I urge this Senate to discuss this thing today. ”

The Senate President ruled Bulkachuwa out of order and insisted that the matter would be debated on Wednesday.

“Nobody here suggests by action or inaction that we are avoiding discussion on this matter.

“I think it is appropriate to give the Chairman of the Committee opportunity to come and present his report personally and Senator Adetumbi is a member of the Banking Committee.

“The Vice of the Committee who is the Chief Whip is here and they are all in attendance.

“They have something to tell us. The Chairman want to present the report himself and when he does that, we will be better informed and we can take appropriate action.

“Tomorrow is less than 24 hours by the grace of God. Please distinguished Senator Adamu Bulkachuwa, I want you to be present so that if there is anything that you want all of us to know even as all of us here feel strong about this.

“If we are going to debate it, let’s do that on the basis of information because that is when we can argue it and say no, stop it because of superior argument. So, let’s not doubt our sincerity here.”

However, Nigeria’s House of Representatives had urged the CBN to suspend the directive which was expected to become effective on January 9, 2023, but CBN governor, Godwin Emefiele, said the decision will not be halted, as he had President Muhammadu Buhari’s support.