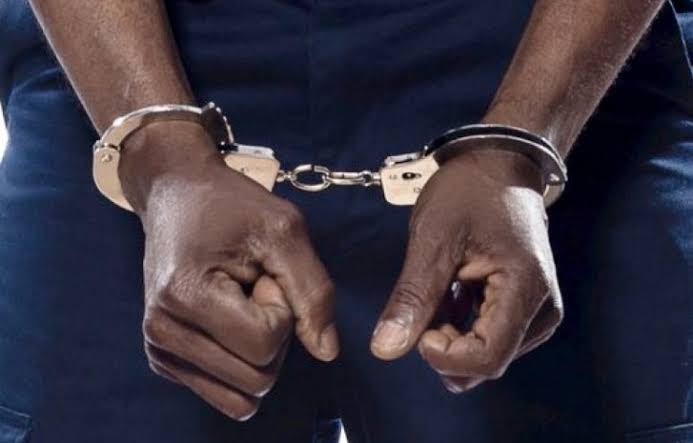 Shoot me if I ever steal again, use my head as sacrifice to the gods — Armed robber makes promise

The officers of the Oyo State Command of the Western Nigeria Security Network (WNSN), popularly known as Amotekun Corps, has arrested a motorcycle mechanic, Shittu Ibrahim, for stealing motorcycles.

Ibrahim was caught with three motorcycles still intact and three others already dismantled with their parts already sold as scrap at Okeho town in Oke Ogun area of Oyo State.

The suspect vowed not to be involved in the crime again, he said that if such a thing ever occurred from him, he should be killed and have his head cut off and sacrificed to Ogun, the god of iron.

According to Tribune, the state Deputy Commandant of Amotekun, Mr Kazeem Akinro, said that information was received from Okeho in Kajola Local Government Area of the state about the notoriety of Ibrahim in stealing motorcycles.

The Deputy Commandant said, “Ibrahim usually removed motorcycles from where they were parked. Since then, we have been on the lookout for him, with the belief that we would catch him.

“He was eventually and three bikes were found with him. Also found were parts of those already dismantled. One of the bikes recovered was used in tracking him and the owners came to confirm it through presentation of valid documents.”

He said that the suspect would be handed over to the police for further investigation.

During investigation, the suspect, confessed: “It is true I stole motorcycles. I started doing it this year. It was just destined that I would be arrested. I have stolen about six of them.”

Speaking further, Ibrahim said: “What I usually did before I was caught was that after closing from my shop, I would be on the lookout for motorcycles parked somewhere, especially at night. Once I had looked around with no one approaching, I would disconnect its wires and move it.

“After that, I would dismantle it into parts and sell them to those who move around to buy scrap. I was also selling the aluminium parts to those making local pots. I have not been making gains from the sales. I was just using the money to eat. I used to sell them between N500 and N1,500. I had a wife who had two children for me but left. I had another one who also had another two children for me, but she just left when she heard of what I was arrested for.

“I know it’s a bad legacy that one should not hand over to children. I don’t understand why I was doing it.”

When told that he was said to be a serial thief by his neighbours, he said that the only time he was guilty of such was when he stole his brother’s N400,000.

“I used to follow my brother as a motor boy. I asked him for money but he didn’t give me. So I stole his N400,000 when I lay my hands on it. I wanted to buy fridge then. He later discovered that I was the one who stole his money,” the suspect disclosed.

One of the victims, Adedeji Saheed, who spoke with the Nigerian Tribune, said that he parked his bike by his wife’s shop one night at about 9pm to pick his wife home when it was stolen.  “I came out later and could not find it. I reported to Amotekun and was told to drop my phone number. Some days later, I was called and told to bring the bike’s documents which I did. They discovered I was the owner of one of those found with Ibrahim.

Another victim, Salau Fatai Odeyemi, said: “I was sick on October 30 and was taken to a pharmacy. After returning home at about 5pm, I slept off. I woke up later that night and wanted to go and park the bike in its proper place when I didn’t see it. I went to report to Amotekun and was called some weeks afterthat it has been found.  I brought my documents and was confirmed as the owner of one of the bikes recovered from the suspect.  We discovered he had changed some things so that it would not be noticed but the engine and chassis number gave him out.”

The suspect promised not to do such a thing again. “If I’m ever caught, I should be shot or have my head severed and offered to the god of iron (ogun),” he vowed.